The current display of the Collection, which is presented on Level 0 of the Museum, identifies the transition from the twentieth to the twenty-first century as the moment of consolidation of sound and voice as materials for artistic production. The new model is rooted in experimental video and cinema works that favour a narrative language that gradually frees itself from the image. Precedents for this interest can be found, however, in Dadaist phonetic poetry from the early twentieth century, and in the poésie sonore and Lettrist experiments that followed the Second World War. More recently, as well as the reflections of theoreticians such as Roland Barthes and Mladen Dolar, whose contributions steered the visual arts toward a sudden attention to sound, we have had the new technological possibilities for recording, altering and reproducing the voice. The relationship between voice and image, vocal experimentation, the inner
voice and the voice of power, are some of the approximations to the human voice that can be found in this exhibition.

Echoing the formal and material innovations introduced by the historic avant-gardes in the early twentieth century, contemporary art has dethroned the eye as the hegemonic sense and reinstated hearing in a real and contingent body. The white cube, that ‘machine for looking' associated to an idea of the museum as inherited from the past, is showing its age. The viewers, re-embodied, have acquired a nearchoreographic quality and outstripped its limits through a multiplicity of experiences. The three-dimensional nature of the Euclidean volume (from classical physics) has been replaced by the volume of sound and voice. This change in material has worked radical changes on the perceptive system and on behaviour: based on the convention dominated by what is visual, we can begin to narrate a history of art with a new multi-sensorial dimension.

The narrative thread of the exhibition begins with Juan Muñoz. Waste Land, 1986, Muñoz's peculiar approximation to the poem by T.S. Eliot, presents a theatrical space for a latent dramaturgy that involves the viewer, as is the case in the installations by Oppenheim and Latifa Echakhch. ‘You read Eliot, and you have the impression it's a voice in an empty room,' Muñoz says. Through this transposition, the fake voice of the ventriloquist dummy – simultaneously a real object and a representation – lets normality be permeated by strangeness to reveal a dislocation.

With the installation Modernologie (Triangular Atelier), 2007, Florian Pumhösl undertakes an aesthetic and ideological revision of modernism's artistic legacy from a more rationalist perspective. The installation is made up of panels ‘bound' in black fabric that unfold in the space as diagonal forms. The work refers to the eponymous project by the Japanese architect Kon Wajirō, and to the Japanese avant-garde artist and designer from the twenties, Murayama Tomoyoshi. What this work represents is not a dialogue between cultures, but culture as a dialogue in itself.

From the point of view of epic, the foundational archetype of Western culture, we find the critical gaze of Joan Jonas in Lines in the Sand, 2002. 'Take my hands in your hands, teach me to remember, teach me not to remember.' The words of H.D. (Hilda Doolittle) traverse like a subterranean current within Jonas's videographic palimpsest, a work about the deconstruction of myths based on Helen in Egypt by the same author. The analysis of gesture as a symbol of power also articulates Portrait, 1994, by Muntadas. The work dismantles the voices of power through a slow procession of anonymous hands that, with the hypnotic rhetoric of their movement, reveal the finality of gestual stereotypes.

Representative and interpretative processes constitute a place for reflection in which totally different works can be inscribed. Hearing Aid, 1976, by Michael Snow, demonstrates that all representations are distortions. In this minimalist installation, it is sound that produces the image. Snow questions the nature of sound, but also memory, space and the limits of representation. In Nature morte, 2008, by Akram Zaatari, the pervasive voice of a muezzin, amplified by the loudspeakers in the mosque, envelops the close-up shots of two men in turbans cleaning their working tools at dawn. Everything develops with great ambiguity. Only the voice's recitative, as a contextualising element, and a very brief sequence provide any clues for the disambiguation of the image.

If the accentual qualities of the voice are important in Zaatari's work, they are also a prominent element in So Different... And Yet, 1980, by James Coleman. The contemporary Olympia at the centre of this videographic monologue, in a static shot lasting fifty minutes, speaks with an exaggerated French accent that parodies national identities; she also parodies gestures and costumes as visual signs defining the identity of the subject. An essential piece in a theatre without theatre, So Different... And Yet is inscribed in the experimentation with language that defines the work of this artist, who uses the media of cinema and theatre to question the nature of representation.

The photographs in Cabinet of, 2001, by Roni Horn, precede the installation by Latifa Echakhch À chaque stencil une revolution, 2007, of great lyrical power. The silent oratorio by Echakhch stimulates different perceptive areas in the viewer. By using the remains of tracing paper characteristic of the pre-digital era, the work erects a silent chapel to the social revolutions of the recent past, while engaging in a critique of the so-called revolutionary powers of today. The title, taken from a sentence by Yasser Arafat referring to May '68 and the protests against the Vietnam War, aims to be a reflection on the nature of today's activism.

In his monologue, Face A / Face B, 2002, Rabih Mroué films the time that binds the voice and the memory of a given instant, of an image linked to his own voice recorded in a tape that traverses time and space. The subjective character of all transcriptions is at the base of Postscript / The Passenger (OV), 1996–2010, by Pierre Bismuth. The text projected on this work is the retro-writing of the dialogue and atmosphere of the film by Michelangelo Antonioni The Passenger, 1975, by a woman about whom all we know is that she is listening to the soundtrack of the film. Bismuth transforms the cinematic experience into a literary one, in a tension caused by the non-cinematic space, and reveals the fragility of image reading codes, the independence of the eye from the ear, and the redundancy of the ear in a world conditioned by the visual experience. Against a silent background, we find the portraits of the Latin Kings' urban tribes by Jean-Louis Schoellkopf.

Without any direct political connotations, but dealing in the concept of subordination, Bruce Nauman proposes a reflection on the nature of power in Shit in your Hat – Head on a Chair, 1990, in which an invisible voice gives absurd orders to an alienated character (a mime) who obeys it blindly.

The suggested itinerary ends with Not I, 1972, by Samuel Beckett. This is a key work in Beckett's oeuvre because it allows the author to turn language into the motor of dramatic action. This ‘machine gun of words', the incandescent mouth that talks about itself in the third person while repeatedly denying its identity, synthesises with great formal purity the central thesis of the exhibition: the importance of the voice in the artistic production of the early twenty-first century and the change it has brought to the way we relate to works of art. 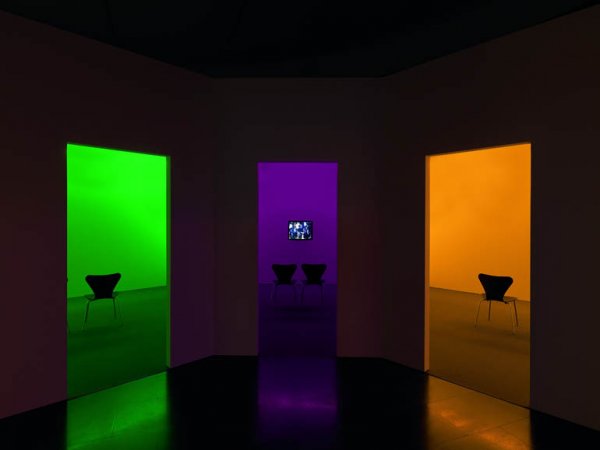 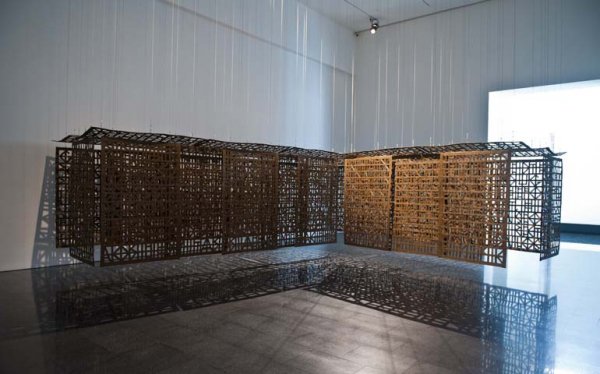 Volume! Works from the collections of "la Caixa" Foundation and MACBA 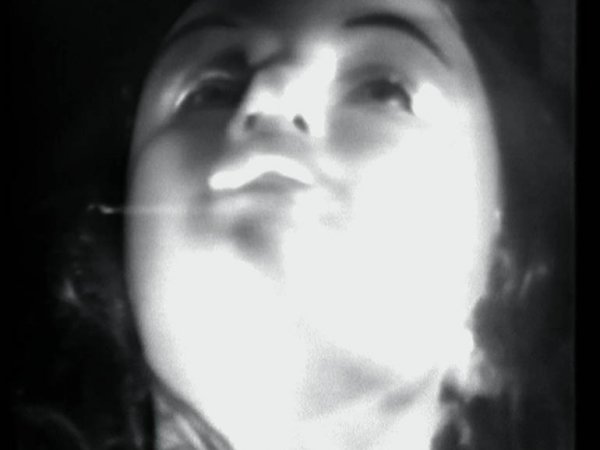 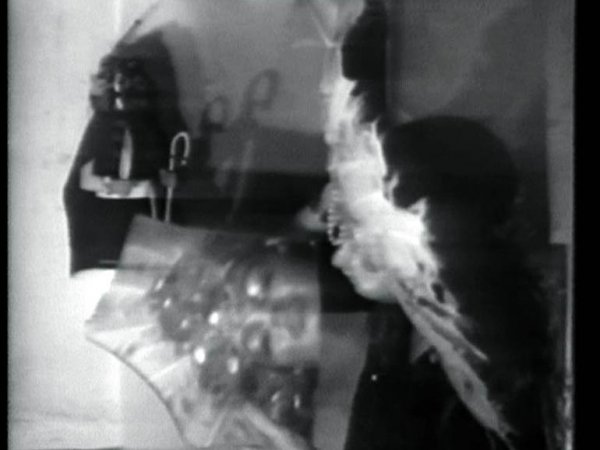 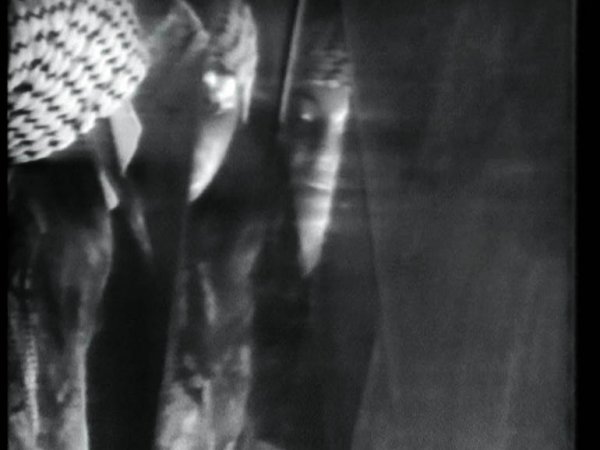