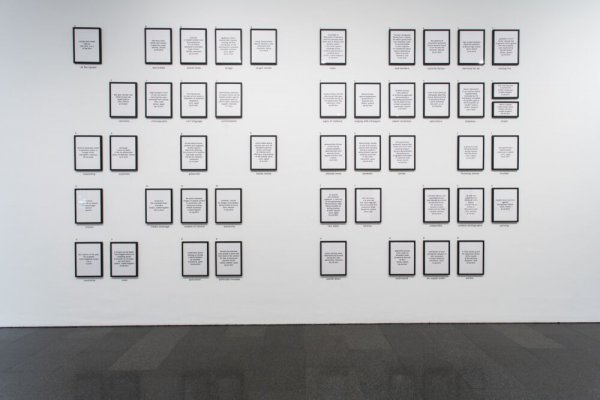 If revolution is a language, Ariella Azoulay argues in a lecture at MACBA in 2011, photography is the paper on which we write it. Based on the concepts provided by this theorist of the image, Marc Roig and Rogier Delfos – the Werker Collective – hang 47 framed texts as if they are an alphabet. Above each text is a letter and, below, a concept used by Azoulay: exploited, barricades, control models… In the initial formulation of this work, this alphabet combined photographs of street protests during the years of the 15-M movement. Later, Roig and Delfos deleted the images, leaving only the caption, which indicates the place, year and context of an image that we can no longer see. An iconic silence that challenges the role played by the photographic image in the construction of a global revolutionary semiotics.

MACBA Collection
Visit the Collection
I like to work with what is often called "cultural heritage", but the materials that I use are banal and clichéd, like sugar blocks, doors, couscous, rugs, official documents.
Latifa Echakhch