Bonus Track is a new kind of educational activity organised by Avalancha, a collective with one foot in creative research and a proven track record as MACBA mediators. In line with the collective’s methodology, this programme steers clear of the traditional academic course format and does not examine contemporary art through different art movements, styles, and schools using the typical reference materials that formal education relies on. Instead, Bonus Track takes the artistic and visual output of a selection of artists working from the second half of the twentieth century to the present, and uses it to trace the conceptual and thematic evolution of contemporary art by means of all types of material, from fanzines from the sixties to today’s TV series.

Taking its name from the extra songs on albums, Bonus Track is designed as a continuous learning activity consisting of four sessions. 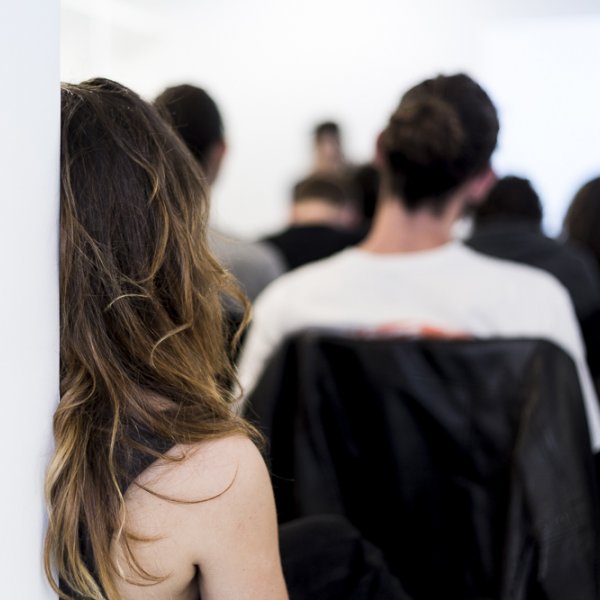 Wednesday 11 November
Joan Jonas: The Body on the Stage. Video and performance
With Cloe Masotta
Venue: Convent dels Àngels Auditorium.
In the sixties, ideas around the mass media as shapers of ideology and identity, the body in action, and new technologies, burst onto the art scene. Fluxus, Pop Art, Nam June Paik, video art, and Joan Jonas are just some of the influential artists and movements at this turning point in contemporary art history.
In her work, American video and performance art pioneer Joan Jonas explores the possibilities of the body in action and at the same time reflects on the materiality of film: she sees time as a raw material and places processes at the centre of her methodology. As such, her incorporation of technology was not simply due to a desire to document her actions: video is not just a recording device, it is at tool at the service of her experimental narrative projects.
This session begins with Joan Jonas and goes on to explore the work of other women artists from the MACBA Collection, such as Valie Export, Martha Rosler, Esther Ferrer and Elulàlia Valldosera. All of them turn to video as an essential tool for the subjective expression of ideas linked to the body and its gestures, and for exploring the expressive, signifying potential of the medium itself.

Wednesday 18 November
Chance is possible through appropriate actions: Provo
With Elena Blesa
Venue: Room 0
In the seventies the social and political map of Europe and the United States drastically changed, and many artists saw the emerging society as a new field of action: when everything has to be rebuilt, it is possible to redefine traditional notions of city and community. Against this backdrop, many artists and collectives, such as Constant, the Situationist International, the Guerrilla Girls and Agustín Parejo School made the city their battlefield, moving away from the museum and adopting a much more direct, politicised approach to social realities. Taking the baton from these artists, numerous groups emerged and broke away from traditional forms of cultural production, with one foot in the art world and the other in the world of social and political activism.
This session will explore these types of hybrid practices, using the Dutch collective Provo as a point of departure. It will also explore the role of the archive within the museum – somewhere between a collection and a library – as a result of the emergence of the new serial formats that many of these artists and groups adopted.

Wednesday 25 November
Xavier Ribas: The urban condition
With Víctor Ramírez
Venue: Convent dels Àngels Auditorium.
Contemporaneity is an invariably urban experience. An intelligent, exemplary point at which to start attempting to map the complexity of this experience is the work of photographer Xavier Ribas (Barcelona, 1960). Based on his photographic series, we will develop a conceptual map that will introduce us to different ways of thinking about the urban condition: in terms of playful appropriations of space (particularly empty sites), of property speculation, of gentrification, and of the expansion of the metropolis both by taking on the form of the industrial periphery and of residential zones, to name a few.
In keeping with the methodology of the collective Avalancha, examples from Ribas’ work will be mixed with other material in diverse formats including excerpts of films ranging from Pedro Almodóvar’s What Have I Done to Deserve This? to David Lynch's Blue Velvet; fragments of series such as Mad Men and The Wire; works from artists such as Constant, Guy Debord and the Situationists, Hans Haacke, Ignasi Prat, Gordon Matta-Clark, Corine Vionnet, David Goldblatt, Ana Müller, and Eulàlia Garu, and even gender readings such as Pornotopía. We will walk around Barcelona with a map of Beirut.

Wednesday 2 December
John Baldessari. ‘I will not make any more boring art’
With Sergi Casero
Venue: Convent dels Àngels Auditorium.
From the late fifties, the mass media prevailed as the main means of transmission of the ideologies and narratives of Western society, firmly rooted in capitalism and consumer culture. As a result, a new generation of artists began to incorporate elements of the new languages of advertising, film, and communication in their work in order to explore the social and cultural impact of the mass media.
The work of John Baldessari revolves around this approach. For the last five decades, without ever losing his playful and ironic spirit, Baldessari has produced a prolific and varied oeuvre using diverse formats and media, including key works based on the appropriation of still images from film and advertising. By following the trail of this American artist, we will discover the work of many other artist who also use the media and show business worlds as a point of departure, and through them we will explore the synergies that have sprung up between the art scene and mass culture.

Information: macba [at] macba [dot] cat ( ) and tel 93 481 33 68
The objects are intended to have the objective character of industrial products. They are not intended to represent anything other than what they are. The previous categorization of the arts no longer exists.
Charlotte Posenenske