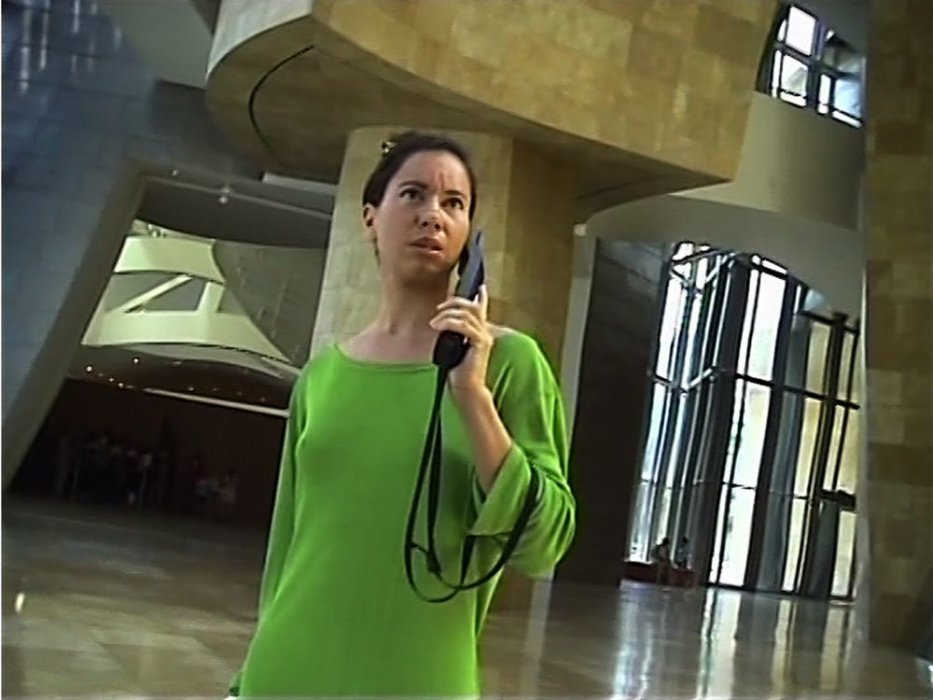 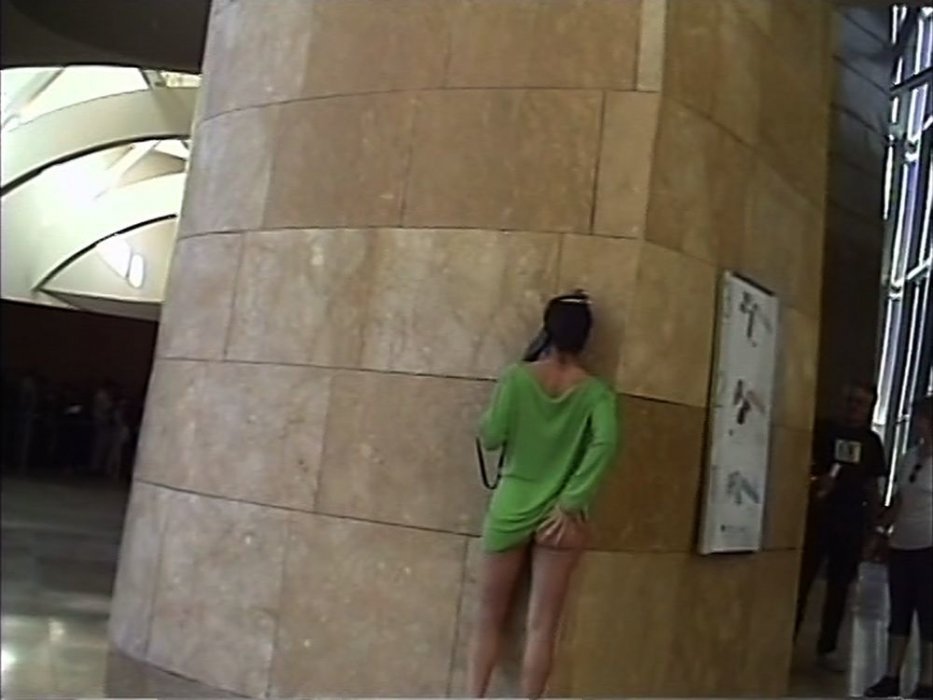 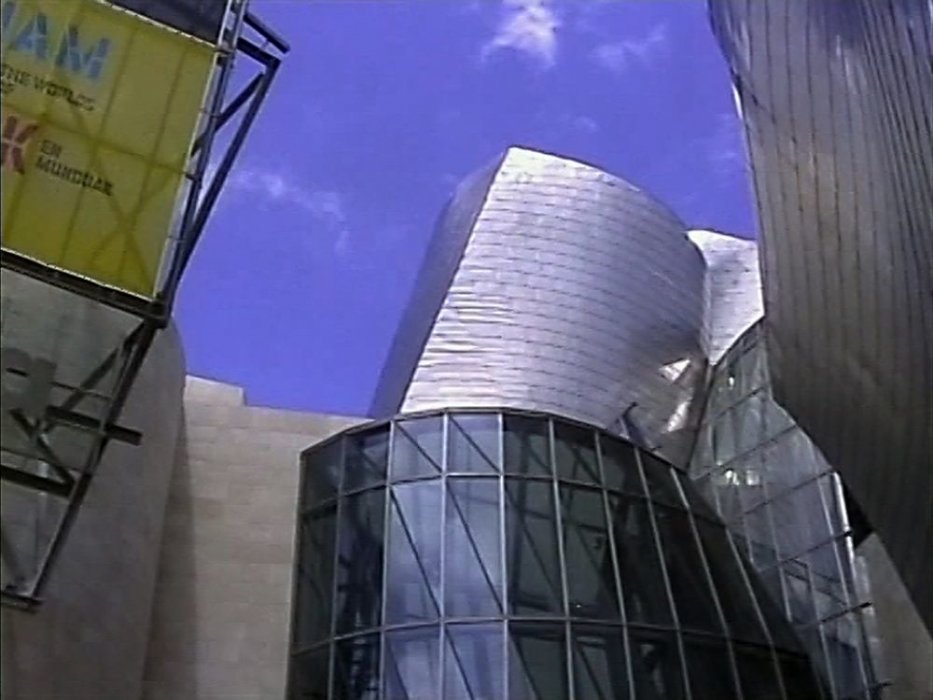 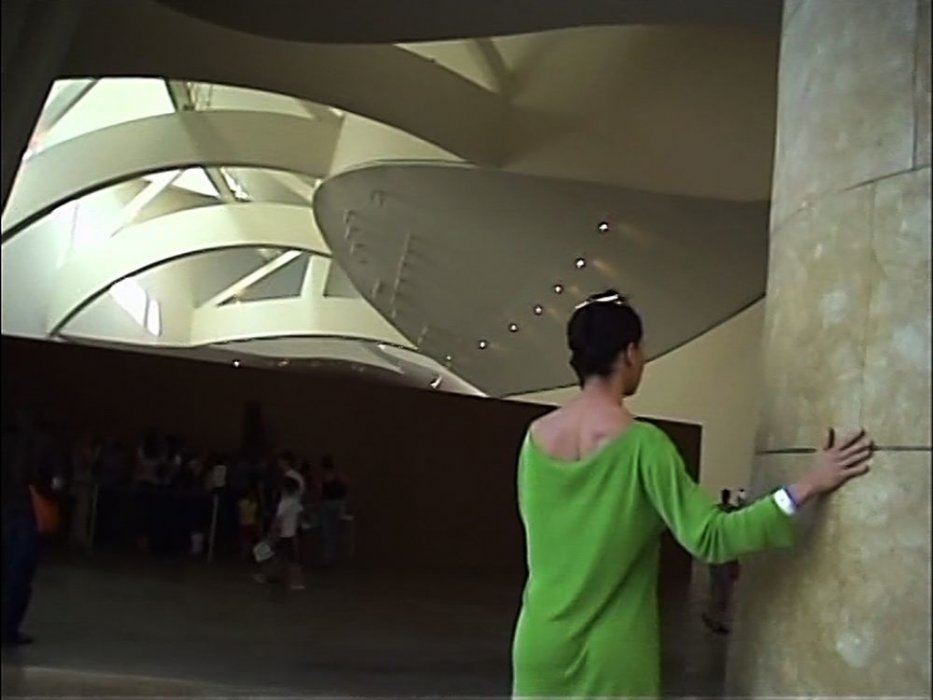 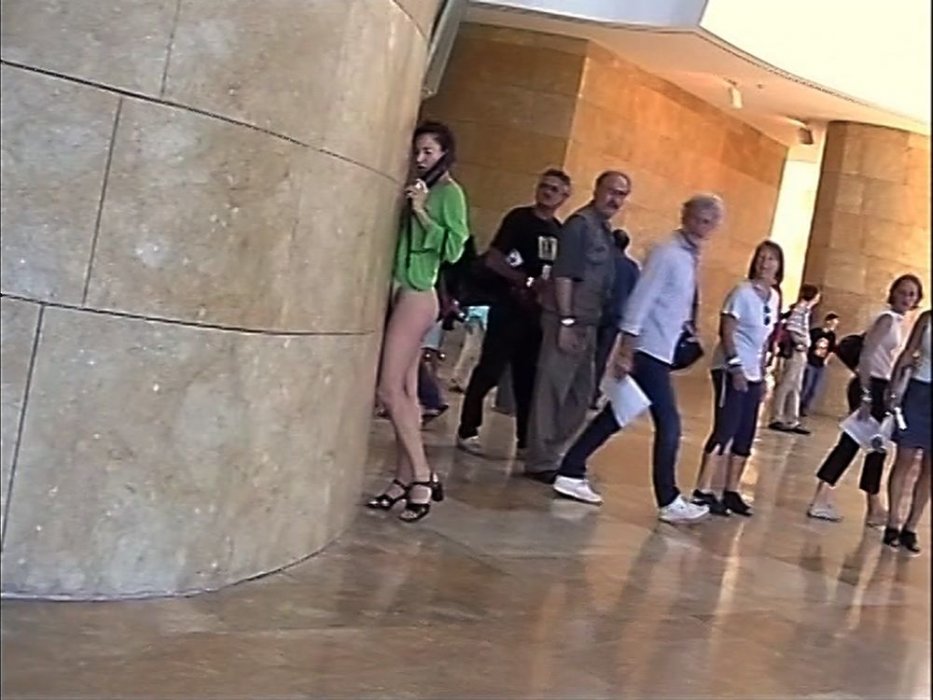 The atrium of the Guggenheim Museum Bilbao was the venue that Andrea Fraser chose for the performance she made in 2001. Wearing a short green dress and black high heels, the artist moves through the interior of the building, one that is emblematic of nineties’ international museum architecture, while listening to the institution’s audio guide: ‘You can feel your soul rise up with the building around you.’ Recorded by five hidden cameras, Little Frank and His Carp follows the artist’s movements from different angles and shows the changes in attitude and emotion generated by the male voice of the audio guide; a voice that highlights the architectural virtues and sensual forms of the building: ‘The museum tries to make you feel at home, so you can relax.’ Following these instructions, the artist responds erotically to the building, while other visitors observe her behaviour. After a scene in which the artist rubs her body against a limestone pillar while revealing her white underwear, Fraser continues her route, always following the instructions of the audio guide, leading her to the space where the steel sculpture by Richard Serra, Snake, is exhibited.

The title of the work refers to a story – explained in the audio guide – relating the architect of the Guggenheim Museum Bilbao, Frank Gehry, with fish: the fish-forms that Gehry projects in his buildings are related to a childhood memory of playing in the bathtub with live carp purchased from the market. The work reflects Fraser’s work methodology and her critique of the mechanisms supporting the art world, a regular theme of her performances and installations. Little Frank and His Carp condenses different layers of meaning. On the one hand, there is the language with which art institutions tend to address the public; on the other, the description of Gehry’s building with its ‘powerfully sensual’ curves. She alludes to the notions of power displayed by some architecture associated with the signature styles of male architects and artists. Behind all this are resonances of the public debate that has been ongoing since the establishment of the Guggenheim Museum in the Basque city in 1997. Since that time, the impact of the construction of the museum on the local economy has been the subject of much discussion, leading to the term ‘the Bilbao effect’, which has become prominent in discussions around the role of cultural institutions in urban regeneration.

Other aspects Fraser highlights in her performance include the strict rules that guide the visitor’s relationship with Gehry’s building, such as the prohibition on photographing its interior, and the criticism of the museum workers’ clothing, which resembles that of any convention centre or airline. In this sense, the artist writes: ‘Together, the security, corporate hospitality culture, and shine make the lobby feel like a cross between a business hotel and an airport – all that’s lacking are trolleys with piles of luggage.’ (Fraser, 2007).

Other works by Andrea Fraser

Andrea Fraser
Museum Highlights: A Gallery Talk
1989
See all works by this artist →
The objects are intended to have the objective character of industrial products. They are not intended to represent anything other than what they are. The previous categorization of the arts no longer exists.
Charlotte Posenenske