This new exhibition of the MACBA Collection began with informalist works by Antoni Tàpies, Lucio Fontana and Modest Cuixart, the constructivism of Jorge Oteiza and expressionist paintings by Antonio Saura and Manolo Millares.
The seventies embraced experimentation through the incorporation of objects on the picture surface, the use of poor materials, and an increasing interconnection between artistic practices and political commitment. In this context, the exhibition included works by Marcel Broodthaers, Joan Brossa, Josep Guinovart, Antoni Llena, Mario Merz, Albert Ràfols-Casamada, Robert Rauschenberg and Dieter Roth.

The Catalan art scene in the seventies, linked to conceptual art, was reflected in the work of Grup de Treball, Robert Llimós, Miralda, Muntadas and Carlos Pazos.
The painting of the “Young Savages” of the eighties was illustrated with the work of Frederic Amat, Miquel Barceló, Jean-Michel Basquiat and Ferran Garcia Sevilla, while the more sensitive approach to abstraction was represented in paintings by Joan Hernández Pijuan and Juan Uslé. Works of different pedigrees and registers rounded off the showcase of art of the nineties, by artists such as Christian Boltanski, Daniel Buren, Jordi Colomer, Gunther Förg, James Lee Byars, Rogelio López Cuenca, Tony Oursler, Carlos Pazos, A. R. Penck, Perejaume, Michelangelo Pistoletto, Rosemarie Trockel and Zush, among others.

This presentation of the collection took up the first and second floors of the museum. It was opened to the public on 23 July 1999. The second floor closed on 13 September and the first floor closed on 3 October.
The presentation was laid out chronologically. It began on the first floor with Informalism, represented by works by Antoni Tàpies, Lucio Fontana, Modest Cuixart and Jorge Oteiza, and then, via references to the Surrealism of Joan Ponç, linked with the expressive works of Antonio Saura and Manolo Millares, both members of the “El Paso” group.

The experimental introduction of objects into paintings and of political references in many works in the 1960s was represented by works by Albert Ràfols-Casamada, Josep Guinovart and Robert Rauschenberg, who used rubbish as raw material to create art. The appearance of very inexpensive or fragile materials in the art world is evident in the work Verds by Antoni Llena, which represented so-called “Poor Art” and shared space with the works of Dieter Roth. The Arte Povera (“Poor Art”) of Mario Merz and the new outbreak of painting and gesture, exemplified here by the work of Joan Hernández i Pijuan, came at the same moment that Joan Brossa arose as one of Catalonia’s most exemplary creators of object poems. Marcel Broodthaers was presented as an international reference point.

Moving on, the work of one of the members of the so-called “Paris Group” was shown: Miralda, presenting paradigmatic works with little plastic soldiers that he revealed for the first time in Paris at the end of the 1960s. Works by Robert Llimós and Carlos Pazos rounded off the presentation of the Catalan art scene in the 1970s.

The installations Portrait and Portraits by Muntadas, with a focus on the message, the power of the gesture and visual communication, occupied space 1A.

The second floor presented a show of what can be called Catalan conceptual art with works from the “Grup de Treball” and documentation of actions carried out by Fina Miralles, Carles Pujol, Àngels Ribé and Francesc Abad. Other works presented included those of Pere Noguera (Massanet series), Francesc Abad (The spirit of utopia) and Francesc Torres (Sculpture).

The painting of the Young Savages of the 1980s was represented by Ferran Garcia i Sevilla (Gods), Jean-Michel Basquiat, Frederic Amat and Miquel Barceló, while the most sensitive abstract art was represented by the paintings of Joan Hernández i Pijuan (Granada triptych) and Juan Uslé (Echoes of abstraction). Works with very different pedigrees rounded off the art from the 1990s, including the particular worlds of Carlos Pazos and Zush, while Rogelio López Cuenca’s Beaux arts and Musée élan, together with Perejaume’s Postaler, represented the younger generation. Then came works by James Lee Byars, Jordi Colomer, Gunther Förg, Rosemarie Trockel and A. R. Penck.

The work of Christian Boltanski (Réserve des suisses morts), together with a work by Rosemarie Trockel, occupied a deliberately isolated space. Flamenco figure by Tony Oursler and Architettura dello specchio by Michelangelo Pistoletto ended the show.

The works Cabanne éclatée by Daniel Buren, Per purificare le parole by Gilberto Zorio, Estació termal by Susana Solano and an untitled sculpture by Sergi Aguilar were exhibited in the museum’s hallways. 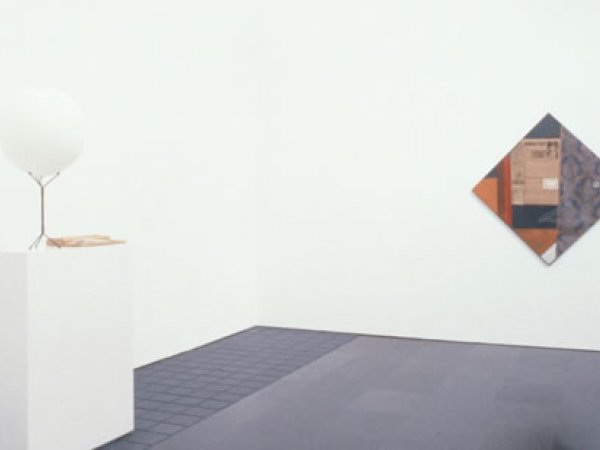 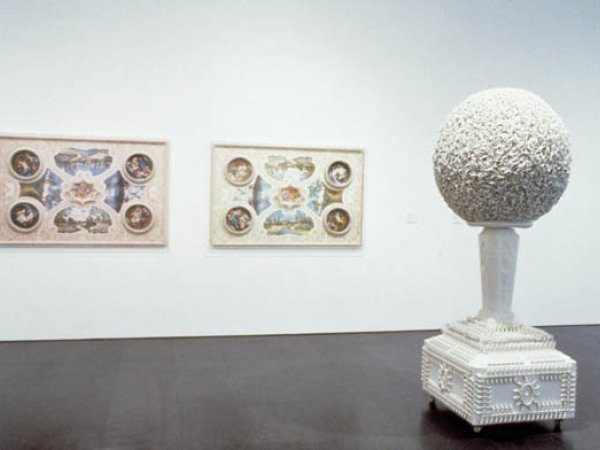 MACBA Collection
I believe an artwork should leave the viewer perplexed, make him reflect on the meaning of life
Antoni Tàpies