In the mid-sixties the use of language as medium and metaphor enters into artistic practice. Following the poetic experimentation of the first historical avant-gardes, art reflects on its own discursive condition. While the return to the physical object by a new generation of sculptors, in the eighties and nineties, reveals a change in the creative paradigm.

This period also witnessed substantial changes taking place in the sphere of international politics. The fall of the Berlin Wall in 1989 marked the end of the opposition of two political and economic systems, while an incipient globalisation expanded the existing framework beyond Western geographies. Art opened up to a new internationalism.
In Barcelona, the 1992 Olympic Games were a catalyst for integrating Barcelona into the service logic of what is often described as a Post-Fordist economy, a process of profound urban, architectural and social renewal by which Barcelona positioned itself in the world’s collectively imaginary. Considered from the local perspective, this new Barcelona embedded in the dynamics of globalisation is not without conflicts and contradictions, and this is reflected in artistic practices. 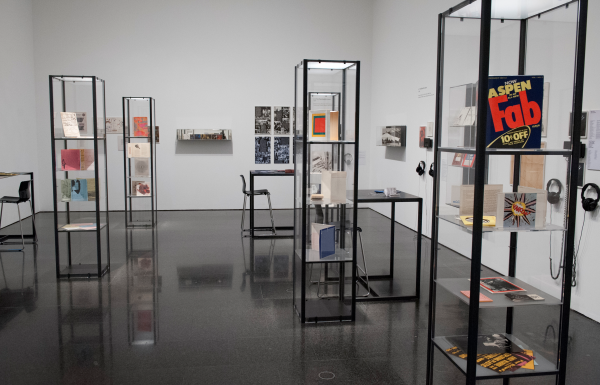 ASPEN. The Multimedia Magazine in a Box MACBA Collection