Gego (Hamburg, Germany, 1912 - Caracas, Venezuela, 1994) is a key artist in terms of understanding the development of Latin American abstract art in the second half of the twentieth century. Nevertheless, when this exhibition was held at MACBA, her work was still barely known and largely misunderstood in Europe. Gego. Defying Structures was an anthological exhibition that brought together over 130 works produced by the artist between 1958 and 1988.

Gego's sculptures are made up of gravitational lines, nets and three-dimensional grids that intersect with the void, forming highly poetic spatial structures. Bodily – rather than simply visual – experience and the interaction between the spectator and the work within a single space take on particular importance in her work.

Hers is an analytic type of art, rooted in kinetic and constructivist traditions, which overturns the reductionist clichés that have historically linked Latin American art to magic-style onirism.

The exhibition presented some of her major parallel line drawings, as well as an extensive selection of her Reticuláreas, Chorros and Dibujos sin papel.

With Lygia Clark and Mira Schendel, Gego is undoubtedly the most important South American artist of the second half of the 20th century. The three artists started out from a constructivism with European roots until they reached their present aesthetic propositions, far removed from modernist idealism; much closer to therapy, writing and an existential vision of space, in fact. Whilst today Clark and Schendel's work is recognised internationally, Gego remains an unknown figure. The exhibition at MACBA aims to rectify that situation, and to show the different facets of her artistic career. The show, which will be anthological, will place special emphasis on the last period of her production, focusing on the "reticularias".

Born in Hamburg in 1912, Gego (Gertrud Goldschmidt) trained as an architect at the University of Stuttgart. She emigrated to Venezuela in 1939, where she began to work in the constructivist tendency with neo-plasticist inspiration.

Unknown to the general public in Europe, Gego's work is undoubtedly an excellent expression of the evolution of abstract art in Latin America. Composed fundamentally of lines and intersections in space, her sculptures organise and give movement to that space while defining and framing the void. In a way, Gego uses the void as the matter for modelling the space, which is an active element. Lines, nets and meshes, Gego's sculptures are made in the form of geometrical structures that give way to organic forms.

Between 1957 and 1971, Gego produced series of drawings dominated by systems of parallel lines from which her first sculptures would evolve. In 1969 she did what is regarded as her most emblematic work: the "Reticulárea". It consists of a great structure of lines suspended in space, constructed with wires wound around at the ends so that they can be joined to one another or to several others at the same time. Later she created the "Chorros" (1970) using the same structuring system. The lines are no longer parallel; they fall vertically in an apparent chaos. Other series of works, like the "Troncos" (1974) based on triangular systems, the "Dibujos sin papel" or the "Tejeduras" – where she seems to want to bring abstract structures back to the real world and the space of the everyday – pay special attention to the space and the vision which distance her from kinetic art or op-art and allow her to develop all her concerns with construction and structure. 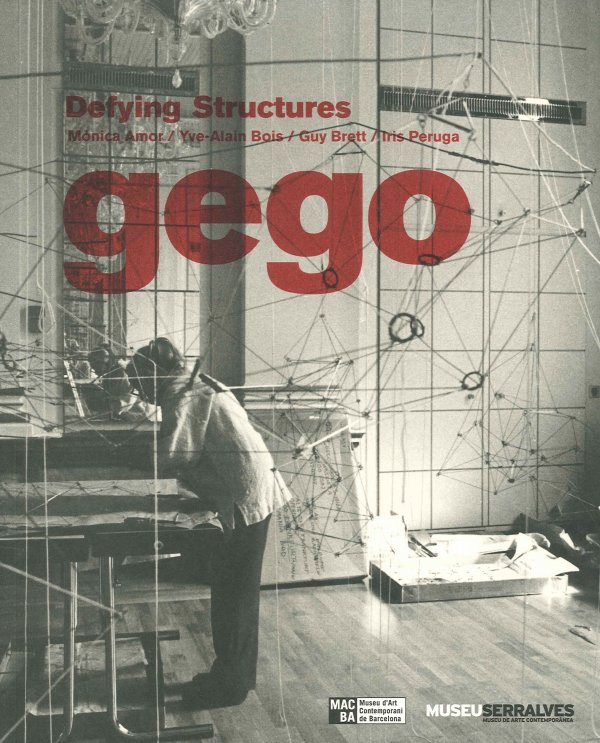