Specific intervention by Carlos Bunga on a photograph of Capella MACBA taken by Adrià Goula.

The origin of Carlos Bunga’s work (Porto, 1976) is painting, not in the technical or material sense, but from a conceptual point of view. The flatness of the traditional picture surface spurred the artist to look for alternatives outside the conventions of two-dimensionality. Bunga prolonged the surface of the painting beyond the frame and the wall and searched in three-dimensional space for a solution to the limit, to the endgame. In doing so, he uses industrial materials to ‘put a skin’ on his constructions: a first layer of glue gives consistency to the cardboard, which reacts to the humidity and also to contact with the paint. The end result is due to the expansion and contraction of the cardboard and the chemical elements, and lies between the quality of the anonymous product and the individual projection of the author’s signature.

In his intervention at the Capella MACBA, Bunga begins with two elements: the original function of the building (Catholic worship) and the avatars of its environment, the Raval neighbourhood and, by extension, the city of Barcelona. In his first work in our city, the artist confirms his interest in the urban, in that which links construction to the living experience. His fundamental inspiration is the public space and those accidents that inhabit it. Originally, the Capella was a scene for the exercise of faith, its rituals, hierarchies, symbols and narratives. Built in the fifteenth century and deconsecrated during the ecclesiastical confiscations of Mendizábal (1835–40), it is preserved today as a skeletal space that plays host to both lay and civic events.

Bunga wants to connect present and past to recover the role of the space outside the conditions, speed and noise of the city, and to encourage the reflective attitude that it had when it was a place of worship. The artist is fascinated by all those acts and events that turn the individual into communal and the subjective into collective. At a time when museums and commercial centres incorporate the public square (or its metaphorical recreation) in their spatial vocabulary and want to recreate indoors the feeling of being outdoors, the notion of freedom of behaviour becomes a psychological fiction. We desperately need to believe we are free, and in all our exchanges with others we surround ourselves with codes, language, norms and grammar of gestures. The institutional space seems to establish itself as the opposite of what had previously been known as the public space.

MACBA is grateful to Barnices Valentine S.A. for providing the materials used in the current exhibition by Carlos Bunga.

In the beginning, the installations of Carlos Bunga (Oporto, 1976) were meant to be destroyed at the same time as they were exhibited to the public. Made with cardboard and adhesive tape, the artist’s sculptural interventions have always developed from a given space: the place of construction, exhibition and destruction always coincides. The ephemeral nature of the work, together with its dependence on a specific place, gives it a theatrical quality, the character of an event and a unique beauty.

Bunga’s projects always start with a thorough study of the functions and original uses of the building where they are to be inserted. His perception stands in opposition to the original use of the building: because use involves ritual, production and intervention. In a way, Bunga’s works question some tenets of modern architecture, especially the one that regards function as the origin of form. The fact that these installations were visible at the time of their destruction characterised them as the negative of art, since, instead of being immutable and perennial, they disappeared before the viewer. ‘Impermanence is constantly present and constitutes our genetic inheritance. The city, which functions as a second skin, is the heir to that organic legacy,’ says the artist.

Bunga does not plan his interventions in the manner of an architect, who would provide the form, systems of support, foundations, images and finishing touches. His method is developed during the process of construction, while his drawings and sketches result from the execution of the work, rather than precede it. By its temporary nature and the modus operandi of the artist, the documentation, the shadow, the footprint of the sculptural object and its memory become Bunga’s future material. His installations refer to a context, a building, an existing architecture and, above all, to the temporary conditions of their execution. ‘In a pre-existing architectural space I am interested in the temporal and emotional process, as well as in the possibility that the imposing character of architecture may somehow exist as experimentation. In the process of conceiving the installations there is no prior plan, which is why becoming familiar with and directly confronting a physical and mental time is so important in the process of constructing the installations.’

Upon entering the exhibition, Bunga offers us, in Espacio invisible (Invisible Space), the image of an existing space, concrete and close to us yet inaccessible. We do not know exactly where it is or how to reach it, but we are offered a constant vision of it, as if we had become watchers of secret acts. In fact, we are seeing the space between the ceiling and the roof, a suspended space devoid of any function or utility. Here Bunga’s intervention recalls a work of Bruce Nauman in which the artist presents the view from a fixed camera that records a section of his studio at night. The work seems to ask: ‘Is there art in the studio when the artist is absent?’ Bunga, meanwhile, seems to say: ‘Is there freedom in an enclosed space?’

A structure of cardboard and adhesive tape, the materials traditionally used by Bunga, occupies the space of the central nave of the Capella in this homonymous work, as a constructive counterpoint to the solemnity and perennial nature of stone, the monument’s essential material. Cardboard has become the raw material for a new type of vernacular architecture or ‘architecture without architect’, to use a familiar expression from the sixties. The precarious, mobile and ephemeral architecture that houses and protects the homeless on our streets is also part of the urban environment in which we coexist. At a time when rights are disappearing and values that seemed immutable are being transformed, eviction has become the threshold of civic dignity. If, as Adam Budak has said about the work of Bunga, permanence is the ultimate expression of power, the temporary nature of the work is the medium, the most appropriate instrument to escape its logic.

Anti-monument, the work of Bunga critiques the immobility of the permanent and celebrates the need to continually reconstruct the significance of our physical and intangible environments. Today we find the work of Bunga in museums and exhibitions openly dedicated to architecture, such as the Chicago Architecture Biennial. But Bunga feels closer to the tradition of the ‘anarchitects’ than the construction industry. As João Fernandes notes, ‘The iconic architecture of our time returned the museum to the condition of space for ritualising the power that shapes it. Will we witness the return of the cathedral, now in a secular, profane or even iconoclastic version? Is the artwork facing the threat of the mausoleum as presentation and representation space?’ 3 Interrogating the current conditions of the urban and the capacity for ‘extraction’ of a proto-sacred space such as that dedicated to religion, Bunga’s project at the Capella MACBA proposes a spatial oxymoron that turns the stone walls of the building into a porous membrane.

Using the metaphor of the popular Catalan tradition of castells or human towers, Bunga also raises a series of debates on the current nature of the public space, its transformations, its decline, its absence and its recuperation. The castells are a perfect expression of ephemeral architecture, supported by the fragility of bodies that act together. As an expression of our need for the other, they form a social metaphor that oscillates between competition and celebration, the festive.

Intento de conservación (Attempt at Conservation) is the title of Bunga’s intervention in the Renaissance area of the Capella, integrated into the architectural complex that was once the Convent dels Àngels. It is an insertion or quasi-pictorial graft onto the ‘museographical’ wall of this space. Its title seems to contradict the perishable spirit of the work in order to satirise, primarily, the original function of the museum: to conserve objects. What if the museum is no more than a machine dedicated to producing immortality in those objects by which we, mortals, measure our fragility? By aligning itself with life’s own conditions, Bunga’s art resists precisely the category of the monumental and remains in the realms of the mundane, that which changes, that which grows or disappears.

To accompany the exhibition, a reading area has been created in the Forum space where you can consult books and catalogues on Carlos Bunga, as well as other artists and disciplines that have influenced his work.

Carlos Bunga
With the support of:

Become a Friend
Share
Bibliography of the exhibition reading area 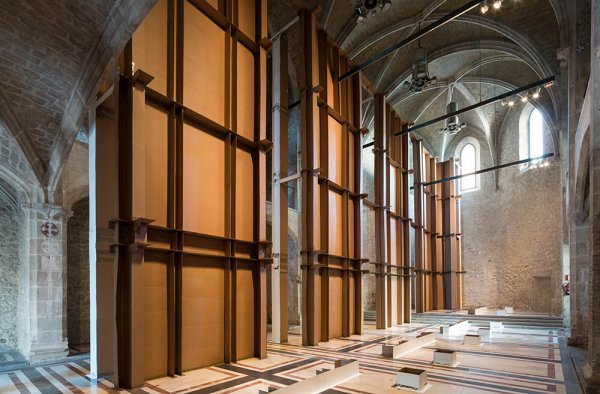 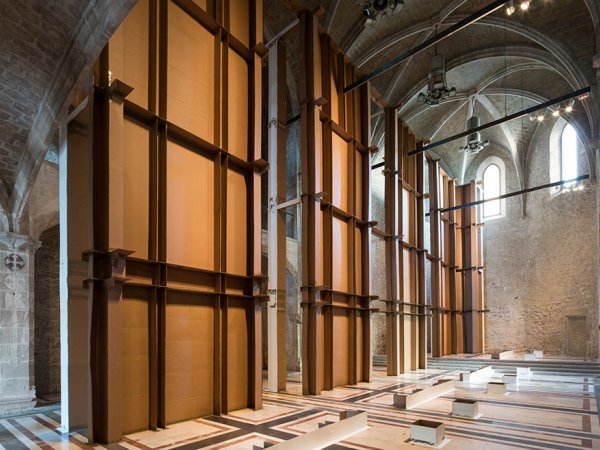 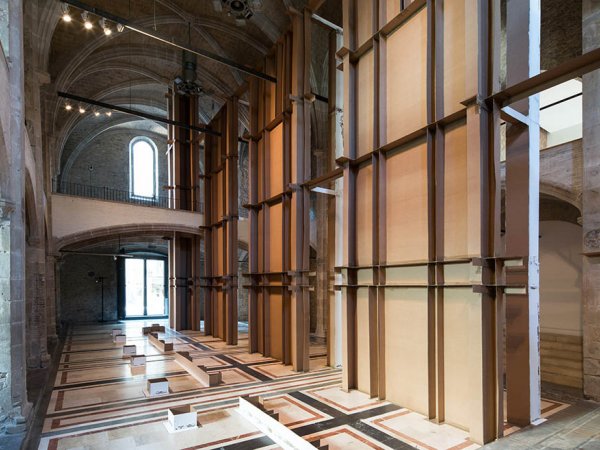 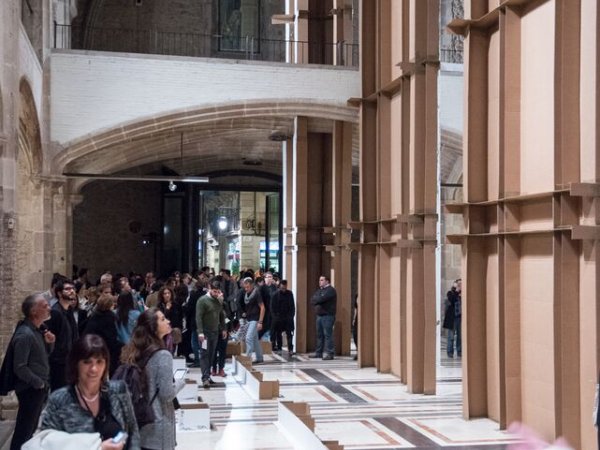 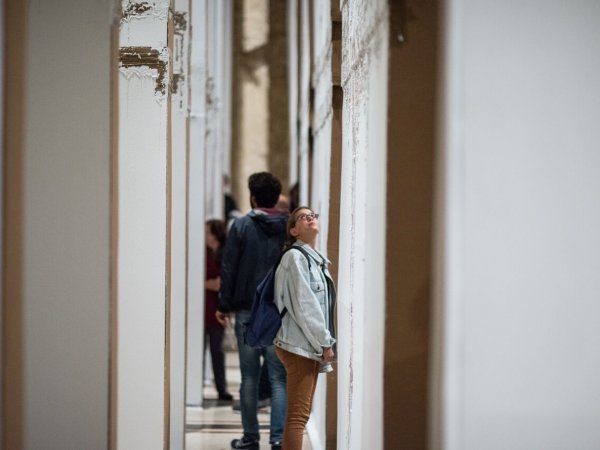 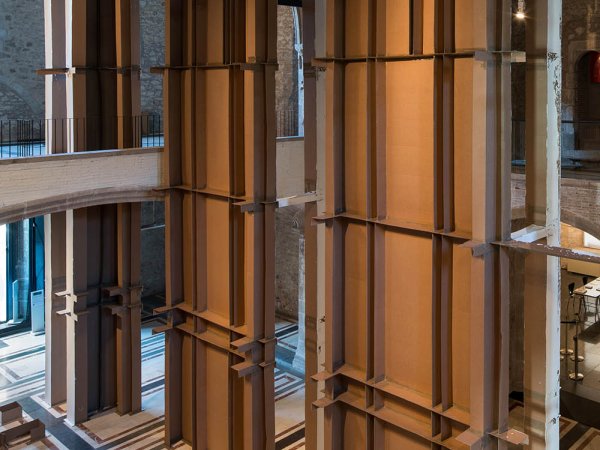 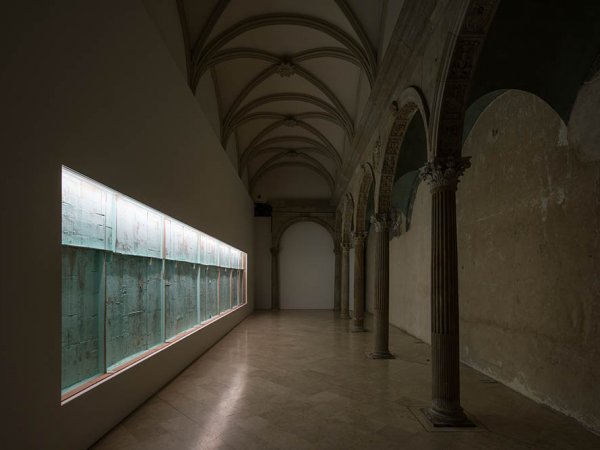 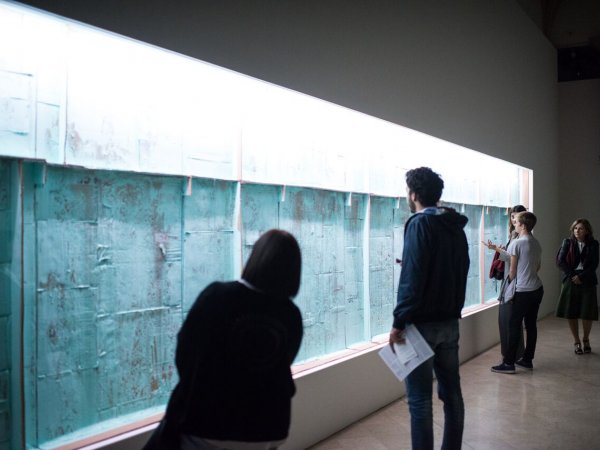 Guided tour AMICS to the 'Carlos Bunga' exhibition (in Spanish)

FONS ÀUDIO #30. Carlos Bunga
16.04.2015
By presenting a story of a victim of violence in Colombia, I am calling on the memory of pain which all human beings have, here or anywhere else in the world.
Doris Salcedo