The Museu d’Art Contemporani de Barcelona (MACBA) and ”la Caixa” Foundation present for the first time in the city an unconventional story written with the art of today that questions the different episodes of agreements and disagreements between modernity and the avant-garde. While avant-garde and modernity have influenced and altered the conscience of the city since the late nineteenth century to the present, 'Art, Two Points' follows these tensions by confronting works and documents from the past with contemporary creations and new visual languages.

The exhibition eschews linear chronology in favour of thematic nuclei. The 1888 Universal and 1929 International Expositions made Barcelona aware of its modernity and established the basis for a present that has survived to this day through a constant flow of new artistic facets and proposals. Barcelona’s access to modernity has been marked by architecture, graphic and applied arts and poetic experimentation. Painting did not play an active part until the fifties. The exhibition follows this narrative until the institutionalisation of the artistic avant-garde in the eighties and nineties, a period briefly known as post-modernity that positioned Barcelona as a global city. 'Art, Two Points. Barcelona lives contemporary art' confronts the city with its vocation for innovation and experimentation, with its risk-taking spirit and the transversality of the arts.

The forthcoming presentation of the Collection arises from an innovative concept that sees a new relationship between two major institutions in Barcelona. As a result of an agreement between MACBA and the Fundació La Caixa, one combined exhibition will represent the two venues for the first time. This event allows for an expanded reading of the recent past and creates the most favourable conditions for understanding the present. Visitors will be able to see the exhibition in its entirety at MACBA and CaixaForum.

The exhibition explores the tensions that have determined modernity and the avant-garde within a specific cultural context. Barcelona, and by extension its geographical and cultural domain, has established a discourse that balances modernity as a force of gradual change and the avant-garde as a radical means of innovation. The avant-garde, initially timid and sporadic, nevertheless wove a course that changed public consciousness of the city and its representation. Ours is an access to modernity led by architecture, graphic and applied arts, and experimental poetry.

The exhibition unfolds in various chapters. Although there is a chronological subtext, the discourse is structured around themes that place the contemporary in dialogue with historical works and documentation from the end of the nineteenth century. With the Universal Expositions of 1888 and 1929, Barcelona is confronted with modernity and sees the birth of new artistic facets and aesthetic proposals that break with tradition. These moments are the points of departure for a narrative that retraces the dialectic between modernity and the avant-garde, until the institutionalisation of the latter in the 1980s and nineties. The formation of the collection of the Fundació La Caixa at the beginning of the eighties and the genesis of public collections of contemporary art culminating with the opening of the Museu d’Art Contemporani de Barcelona (MACBA) in 1995 are emblematic of this process. 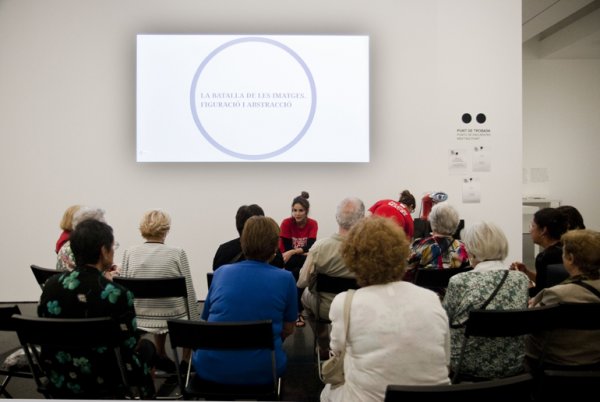 The Battle of the Images Figurative and Abstract Art
Visits
Activity