La ronda was the title of the exhibition conceived by Moroccan-born French artist Latifa Echakhch (El Khansa, Morocco, 1974) for the Capella MACBA. It consisted of three interrelated installations: Eivissa (2010), Gaya (E102) 5, Vitrail (2010) and Fantasia (2010), which formed a kind of performative still life that could be interpreted on many levels.

"La ronda" is a Spanish card game that is also popular in Morocco, which the artist used to play to amuse herself during her summer holidays as a teenager in the African country. The title of the exhibition is thus a clue to some of the key aspects Echakhch's work: the use of symbols and traditions from her own experience to build critical reflections on politically relevant social issues, such as migratory flows and how they contribute to shaping new identities.
As in he previous works, Echakhch uses povera or non-artistic materials (food colouring, sugar cubes, couscous, playing cards and carpets) as the main elements of her work. In fact, she draws inspiration from these elements and from the sensory memories that radiate from them, in order to shape her ideas.

All the exhibitions at the Capella MACBA share the common denominator of having been specifically produced to be shown in this space. Our purpose is not to promote a link with the architecture but to foster an awareness of the creation, through a particular ‘topos', of a new work that the museum may acquire for its collection in the future.

‘I like to work with what is often called "cultural heritage", but the materials that I use are banal and clichéd, like sugar blocks, doors, couscous, rugs, official documents.'

Six years ago, Latifa Echakhch (El Khnansa, Morocco, 1974) exhibited her French Touch (self-portrait): a life-size colour photograph of an arm – her arm – held up vertically; the nails of the Moroccan artist's partly closed hand naturally displayed a pale pink French manicure with white tips. The title of the work is a witty pun that makes reference to her ambiguous national ‘identity', her adscription to France, a country that she has not only adopted as an immigrant but also incorporated as part of her own biological being, as is undeniably evidenced by her nails, rendered an immanent national ID card.

Fundamental to this artist's contentious strategies are these sorts of slippages of meanings, shifts from the conventions of semantics to those of identity and back again, with all their attendant contradiction, paradox, mockery and even potential scandal. Similarly crucial are the physical displacements of certain marks of identity into contexts or supports where they acquire one or more new meanings or reveal unexpected characteristics that clash with their original meaning (and where they suggest the Surrealist ‘found object' in all its riveting subversion). On the basis of Conceptual art, Echakhch makes use of any language and technique available: installation, video, sculptural objects, simple materials from everyday life and happenings.

Alien of Extraordinary Ability (2005), for instance, is a solemn polished gold plaque that reproduces the US visa granted to ‘Aliens of Extraordinary Ability'. Or the Certificat de Vie (2002), a document that a Moroccan citizen can obtain at his or her Embassy in Paris that verifies that the citizen in question is alive and, hence, serves to demonstrate a person's existence. The strange nature of such official documents is evidenced when they are artistically removed from their contexts; they emit a sense of bureaucratic absurdity or of injustice, and become an invitation to critical reflection.

The artist often makes use of the spaces in which she is invited to exhibit, finding clues to guide the production of a work specifically related to the site. For instance, her video Untitled (2005) depicts a sizeable political protest as it progresses along a Parisian boulevard, and the speedy and extremely efficient clean-up job performed by street cleaners who, in the wake of the crowd, leave the avenue spotless. The duration of the march and the clearing of the papers, wrappers, pamphlets and other items that it has left is exactly 23 minutes. The restoration of the protest scene to the daily – and secular – routine is both comic and delirious. The video is, of course, a declaration of scepticism. ‘In Paris, there are five public protests a week,' explains the artist, ‘but nothing changes. It's as if nothing at all had happened. This is the feeble legacy of the French Revolution and 1968.'

Invited to exhibit in Bangkok in 2003, Echakhch hung on the wall of the gallery space a dozen open airmail envelopes to catch the sawdust produced by drilling holes with a 9 mm diameter – the calibre of standard pistol bullets – into the wall. The return address on these envelopes was her address in Bangkok, and they were addressed to the artist's European residence. Thus, Echakhch issued a subtle, provocative and aesthetically striking call to ponder the bloody events surrounding the struggle against drug trafficking, which, in the brief weeks she was in the capital of Thailand, had caused 1,500 violent deaths.

Latifa Echakhch's invitation to critical reflection – and to heeding ambiguity in the strict linguist sense of the word of which we spoke at the beginning of this text – includes her status as an international artist in this globalised world. Thus, in Hospitalité (2006) she clumsily engraved on the upper section of the gallery's wall the words Espace à remplir par l'étranger (Space to be filled in by the foreigner), a phrase that appears on the forms that immigrants must fi ll in to obtain residency permits. ‘Chiselled' on the gallery, the phrase was, among other things, an invitation to participate. And, of course, at the end of the exhibition the wall had to be restored and the indentation created by the text ‘filled in' so that it would look as it had before: this task was most likely performed by immigrant workers.

For her exhibition at the MACBA Latifa Echakhch presents three installations created specifically for this space. Two of them refer to human flows from North Africa, movements of people who, fleeing poverty or in war expeditions, have traditionally headed towards Europe, some of them settling in Spain. The central piece, Fantasia (2010), consists of fourteen flagpoles distributed at different angles throughout the gallery space.

The title makes reference to the ‘Moroccan fantasy', a traditional Moroccan festive and sports display in which a group of men ride horses and shoot their weapons simultaneously such that all the shots make a single sound. It also alludes to the typical image of the plazas of Strasbourg, the seat of international organisations in front of which a battery of colourful flags are usually on display. Bared of their flags and strategically distributed to suggest different perspectives and volumetric rhythms, the flagpoles in this Fantasia are an invitation to contemplate the reversible and relative nature of national symbols and of the identities they represent, thus appealing to the idea of the multicultural.

In the second piece, Eivissa (2010), the Spanish playing cards used both in Spain and Morocco are seen from under pieces of the concrete platforms built in Eivissa during the Spanish Civil War to weigh down the tents of the Moroccans soldiers General Franco enlisted in his rebel army. The proximity of the elements, spaces and transaction rituals of two countries and cultures formulates a series of dialectics between play and dogma, the shared and the imposed, as well as between that which is understood to be fluid and transitory and that which declares itself definitive, though equally subject to decline.

In order to modulate the natural light in the Capella, in the work Gaya (E102) 5, Vitrail (2010) the artist has painted the apse windows with bright yellow food colouring of the sort used in Middle Eastern cooking as a cheap substitute for saffron (hence the work's title). This piece emphasises both the intellectual and sensual nature
of Echakhch's installations.

Latifa Echakhch lives and works in Paris and in Martigny (Switzerland). Numerous solo and group exhibitions of her work have been held in venues such as Le Magasin (Grenoble), Tate Modern (London), CAC (Vilna), the ArtFocus Biennial (Jerusalem), Manifesta 7 (Bolzano, Italy), Kunsthaus (Zurich) and the Swiss Institute (New York). This is her first exhibition in Spain.

Latifa Echakhch
With de support of: 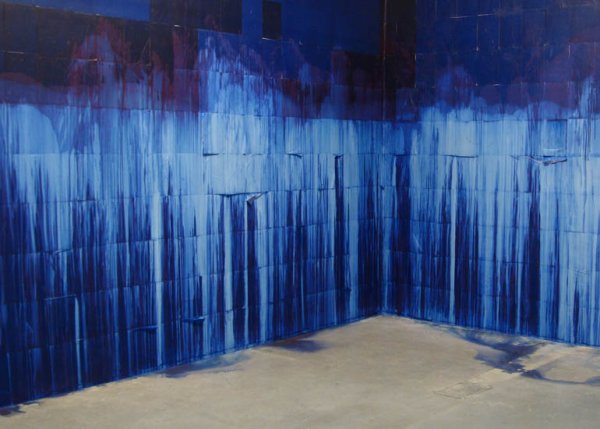 Why and How do I Do what I Do? Artists Speak
Lectures
Activity

Why and How do I Do what I Do? The artists speak
Lectures 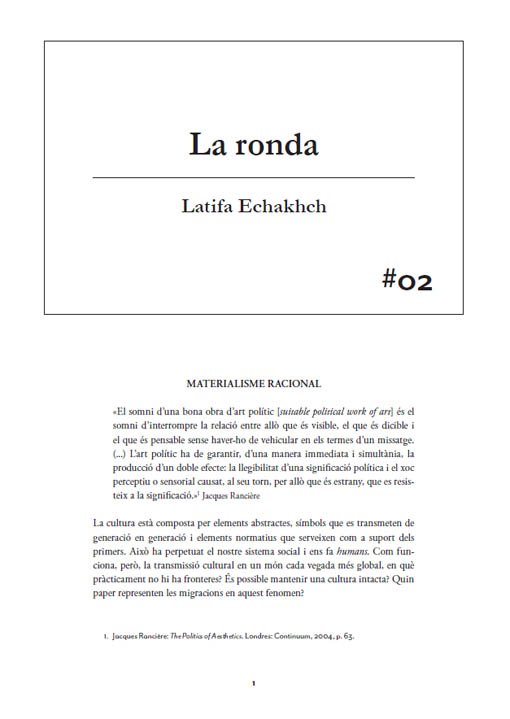