This year, a constellation of anniversaries allows us to see the outline of a complex map of ideas and practices that have come into alignment. The commemoration of one hundred years since the birth of the revolutionary Catalan psychiatrist Francesc Tosquelles, twenty years since the death of Félix Guattari, and forty years after the publication of one of one of most important books in the field of contemporary thought, Anti-Oedipus, offer us the opportunity to commemorate an intellectual legacy that spans the fields of political utopia, philosophy, art and the clinic.

The life stories of Francesc Tosquelles and Félix Guattari articulate new forms of subjectivity and collectivity based on a particular approach to the phenomenon of minorities and to militant action, and on the desire to integrate arts practices, philosophical thought and the clinic, in what could be seen as a political offshoot of psychiatry. As such, this seminar does not aim to mythicize Tosquelles and Guattari, but to use them as a productive site for contemporary thought.

The programme will be rounded off with a screening of Déconnage (2011), a video-essay produced by Maurizio Lazzarato and Angela Melitopoulos, which is included in the new exhibition of the MACBA Collection.

Curator: Gabriela Berti. Assistant: Mariana Hormaechea. With the collaboration of the French Institute of Barcelona 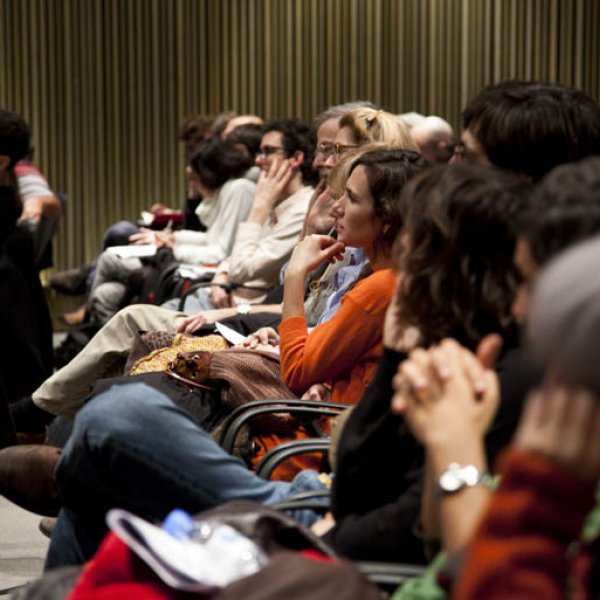 Déconnage is a video-essay on the psychiatrist Francesc Tosquelles (1912-1994). The film reinstates the figure of this Catalan psychiatrist who migrated to France after being sentenced to death by Franco. As the head of the Saint-Alban psychiatric hospital in the Languedoc-Roussillon area during World War II, he developed the method known as 'institutional psychotherapy' and overhauled therapeutic processes by eliminating the hierarchy between medical personnel, patients and members of the resistance. Tosquelles reformulated Freud and Lacan's psychoanalytic theories through the use of categories such as place, migration, pilgrimage and drifting, all of which are linked to the idea of the body. Tosquelles' experiences at Saint-Alban influenced thinkers such as Félix Guattari and Gilles Deleuze in their critique of psychiatry and their analysis of the political construction of modern subjectivity. In Déconnage, Melitopoulos and Lazzarato show an interview with Tosquelles, along with spontaneous commentary by the philosopher Elisabeth von Samsonow and the psychiatrist Jean-Claude Polack in 2011, in a re-reading of Tosquelles' ideas from today's perspective.

6 pm Presque Ruines
One that disappeared and several remains

In November 2011, in the middle of the financial crisis, a group of us were recruited by the Nature Theater of Oklahoma to take a ship from Lisbon to Santos, with the idea of making a film about the one that disappeared. What occurred during that journey is yet to be seen, but its remains can be recounted.

7.15 pm Anne Querrien
Tosquelles-Guattari. Confronting the forces of death
Historically, people with mental illness were forced to face conditions that brought them close to the most explicit side of death, producing states of anxiety. If we are to construct an environment that welcomes these people, we must make pragmatic changes to the organisation of space, so that those who are with them do not simply accompany death. This specific form of care was called 'Institutional Psychotherapy' and practiced in a broad sense by Francesc Tosquelles and Fèlix Guattari. Meanwhile, it is also necessary to understand the fears of patients through analysis, and to activate them, particularly through artistic practices, in a spectrum of faces that fade into multiplicities, so as to be prepared to live with their fears. This presentation is based on the books Le vécu de la fin du monde dans la folie by Francesc Tosquelles and Caosmosis by Félix Guattari.

This film is not only a portrait but also a self portrait of Francesc Tosquelles, the psychiatrist and psychoanalyst of Catalan origin that shook the French and European psychiatry. Refugee in France at the end of the Spanish Civil War, he worked from 1940 at the Hospital of St. Alban, in Lozère. This is an interview with the man who was the founder of Institutional Psychotherapy. His life and work, crossed by the madness of history, have radically inflected the history of madness.

When we began this film in the mid-80s, we knew the importance of François Tosquelles in the history of French psychiatry, but we knew little of the exisiting joints between the political commitment in Tosquelles in the Spanish revolution and the revolution he caused in psychiatry. This is what this film shows. Dr. Jean Oury likes to say that "To understand what institutional psychotherapy is, one must know the history of the POUM."

So, though today in France, and around the world, we are witnessing a phenomenal regression on psychiatric practices, this film has at least one virtue: to give courage and willingness to fight again to improve live conditions of the mentally sufferers.

5.45 pm Fernando Vicente
Francesc Tosquelles and the Transmission of Values

Man did not exist for Francesc Tosquelles without his madness. Today, we do not want to see this madness, and we choose to look the other way. But is it still possible to humanise our gaze when it addresses the most fragile members of society? Tosquelles thought that it was, and he put this belief into practice throughout his personal and professional life.

6.30 pm Grupo Esquizo Barcelona
Thinking from the perspective of the border

We are living in a context in which the precarisation of work is increasing and processes of singularisation are decreasing. This brings about new problems that require a re-composition of human praxis (in all spheres and at all scales, from subjectivity to collectivity). We will use some of Francesc Tosquelles' concepts and practices as a springboard from which to propose a series of actions that invite us to reflect on the possibilities of producing common forms of speech and meaning in the midst of dispersion, in order to approach an idea of community that is not closed around identity-based affiliations.

In this journey through the life story of Francesc Tosquelles, we will pause at a few important points: the path that led him from the city of Rues to an encounter with Marxism, his participation in the Spanish Civil War with his POUM comrades, his arrival in France and the evolution of his work, particularly at Saint-Alban (a poor, out-of-the-way place that is known for the creation and constitution of Institutional Psychotherapy), his return to the Pere Mata Institute in Reus to coordinate activities around patients with serious cases of mental illness, etc. It will thus be a journey through the 'vices' that shaped Francesc Tosquelles: psychiatry, Marxism, and – probably most importantly – being Catalan.

Gabriela Berti
Gabriela Berti has a PhD in Philosophy and an MA in the Theory and Aesthetics of Contemporary Art (UAB). A specialist in contemporary and applied philosophy, she has focused much of her research on the work of Deleuze and Guattari. Since 1995 she has been a teacher and teacher trainer at undergraduate, postgraduate and PhD levels, and at various teaching centres (Universidad de Buenos Aires, Universidad de Salta, UAB, UB, Universitat Politècnica de València, Universidad Complutense, Madrid, among others). She has written numerous books and specialised articles. Her most recent book received the UNE Best Edition Award for 2010. She works as an independent curator for various institutions and museums.

Esquizo Barcelona
Founded in 2009, Esquizo Barcelona is a heterogeneous group of people who share interests at the social, philosophical and political levels, and seek to explore contemporary thought (Tosquelles, Deleuze and Guattari, Foucault, etc). They combine a preoccupation with different forms of politicisation of subjects and subjectivities, with an interest in social organisation and the possibilities of interpellation and communal action. The group is made up of people from different professional backgrounds in the fields of social psychology, psychoanalysis, philosophy and artistic practices such as music. They organise activities based on reading and reflection around capitalist practices, subjectivation and management of desires, institutional mechanisms, support networks, group micropolitics and, recently, border thinking in the work of Francesc Tosquelles. They impart practical workshops that emphasise interaction between the events of everyday life and art.

Maurizio Lazzarato
The independent sociologist Maurizio Lazzarato is a Paris-based Italian thinker who is best known for his research on cognitive capitalism, immaterial labour and the emergence of so-called post-capitalist movements.
He was a contributor to the magazine Futur antérieur and is a co-founder and editorial board member of Multitudes.

François Pain
François Pain is a filmmaker who makes documentaries and fiction films related to alternative psychiatry. He is a co-founder of the Federation of Non-Commercial Free Radios and Ràdio Tomate. For a time, he was one of Francesc Tosquelles’s patients at La Borde clinic, where he also worked with Guattari. He is the director of the film François Tosquelles, une histoire de la folie, with Daniele Sivadon and Jean Claude Polack.

Anne Querrien
A sociologist, Anne Querrien met Félix Guattari in 1965 as a result of her participation in the student movement and her work as a psychoanalyst with mentally ill students. She began working with Guattari from the sixties onwards in field of schizoanalysis in the magazine Recherches, and also in the alternative social science research centre CERFI. She was one of the political leaders of May 1968 and of the feminist movement. In 1976, while she was at CERFI, she wrote the book L’École mutuelle, which was reissued in 2004 and translated into Spanish. She is co-editor of the magazines Multitudes and Chimères, which both specialise in the philosophy of Guattari and Deleuze. She has also worked as an urban sociologist and as a contributor to the newspaper Les Annales de la recherche urbaine, which was published until 2010.

Presque Ruines
Presque Ruines is a Paris-based infra-disciplinary collective that works with artistic and research formats related to existential territories, mental and bodily effects, in the context of cognitive capitalism and artibrary power. The group is currently working on the project KAFKAMACHINE, which revolves around a film based on Kafka that Félix Guattari wanted to make. It includes a series of screenings, seminars, workshops and publications, as well as the creation of a film.

Jacques Tosquellas
Jacques Tosquellas was born in Saint-Alban, France, with French citizenship, and recovered Spanish nationality in 2011. A psychiatrist by training, he has worked as a doctor in psychiatric hospitals since 1970, the same year in which he completed a thesis on medicine in Marseille. Throughout his professional career, he has specialised in psychiatry, institutional psychotehrapy, psychoanalysis, psychodrama, Balint psychodrama and bioenergetic analysis, among others. He has written numerous articles and books, including Entretien avec Maurice Despinoy, Entretien avec Jean Ayme, Météorologie, ambiance et psychiatrie ou "ça pue" sur le chemin et dans les chaumières psychiatriques and Courriers Tosquelles-Balvet. He has taught at the CIFP in Paris and Marseille and regularly participates in seminars and conferences, some of which are dedicated to his father Francesc Tosquelles.

Fernando Vicente
Fernando Vicente is a psychoanalyst and former teacher at Paris 12 and Paris 7 Universities. He is a supervisor at various institutions in France and Catalonia. He has worked directly with Francesc Tosquelles and Jacques Tosquellas. His latest book, La Parole en psyquiatrie, encore efficace? has recently been published in France. 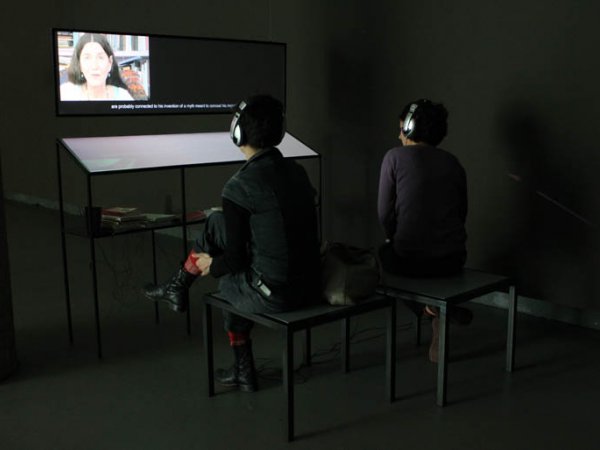 Jacques Tosquellas Deleted scenes
26.11.2012
I don’t think about art when I’m working. I try to think about life
Jean-Michel Basquiat