As part of the collaboration between MACBA and the LOOP Festival, which this year celebrates its 14th edition, MACBA presents two performance works by the artist Malcolm Le Grice in the Capella, an artist represented in the MACBA Collection with the work 'Berlin Horse'.

‘All my work with film and video has been concerned with the primacy of presence over representation. Initially working as a painter, I have always taken pleasure in colour and the image, while an early experience of playing jazz led to the continuing influence of improvised musical form and impromptu actions. When I started to experiment with film I found that I could combine my delight in the visual image with an exploration of time that drew more on music than the traditions of cinema. Working outside the narrative film industry, by printing, developing and editing my own material, I could improvise the making of a film without a script – the film emerged from an immediate and flexible creative process. Then my growing engagement with the live film-projection event itself, led me to make multi-screen and improvised performance works. Horror Film 1 (1971) allowed me to make an immediate cinema from shadows and colour loops, while Threshold (1972) led me to explore image transformation in printing and to become a kind of “film DJ” shifting projectors and mixing the superimpositions live.’ 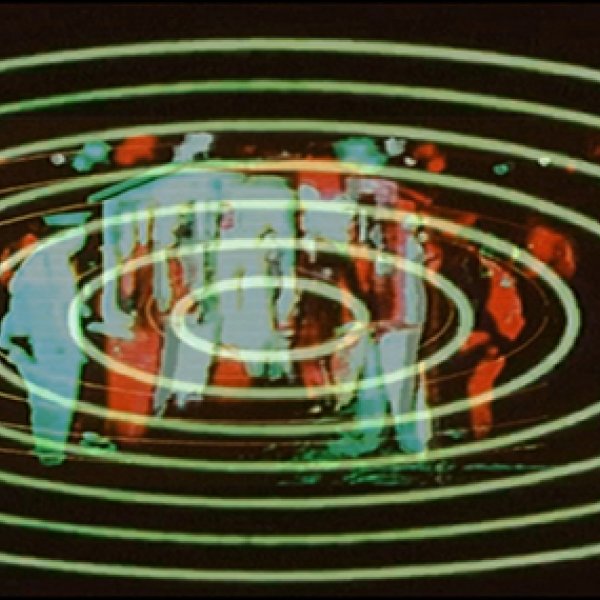 Threshold (1972), 3-screen projection performance, 16 minutes
Film and sound: Malcolm Le Grice
Threshold is based on a small number of component sequences. It begins with abstract colour fields filling the whole screen, then develops through other simple abstract images created by accidental exposure of the film stock: edge fogging. The main image of the film is of border guards at a frontier post. The film explores a range of film printing techniques using colour filtering, mattes and multiple superimpositions. It also includes a short section of computer-generated abstract animation made by Le Grice at the Atomic Energy Research Laboratory in England in 1969. The title is intended to imply various forms of threshold or edge when significant transformations occur or are inhibited (the border of a state), the perceptual points when one optical experience transforms to another, the point at which an image becomes an abstraction of its shape or movement. The performance version of the film is an improvisation achieved by moving the projectors and superimposing the image as the projection unfolds.

Horror Film 1 (1971), film-shadow performance, approx. 12 minutes
Film and sound Malcolm Le Grice
First presented in 1971 using three 16mm projectors, each with short loops of changing colour. Projected onto the same screen, the central image is large while the two side images are smaller and superimposed onto the centre of the larger screen. The performing body casts complex coloured shadows. The action begins with touching the screen and, passing through the space of the audience, ends at the projectors. The actions are timed to an audio tape of breathing. Though improvised in detail to fit the particular time and place, the action follows a consistent pattern that has changed little since the first performance.
Malcolm Le Grice was born in Plymouth on 15 May 1940. His film and video work has been exhibited internationally, including: Museum of Modern Art, Vienna; Fundació Joan Miró, Barcelona; Louvre, Paris; and Tate Modern and Tate Britain, London. His work is in permanent collections of Centre Georges Pompidou; Royal Belgian Film Archive; National Film Library of Australia; British Film Institute; and German Cinamatheque Archive. A number of longer films have been transmitted on British TV. He has published extensively on experimental cinema including the books Abstract Film and Beyond and Experimental Cinema in the Digital Age.