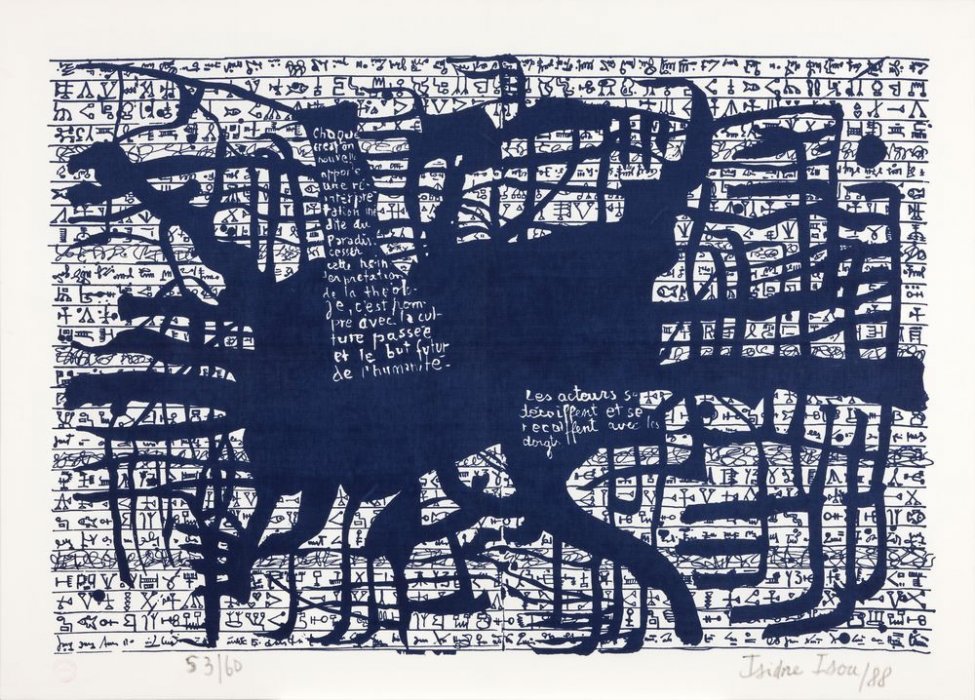 Born in Romania in 1925, Isidore Isou arrived in Paris at the end of World War II. He called himself a ‘Lettrist’, a movement of which he was initially the only member. By 1950, the Lettrist group also included Maurice Lemaitre, Jean-Louis Brau, Gil J. Wolman and Francois Dufrene, who were joined by Guy Debord in 1951.1 Lettrism, also known as hypergraphie, and super-écriture, had its theoretical roots in Dada and Surrealism, and called for a renovation of all the arts. The first public manifestation of the new artistic movement took place in January 1946 at the Societes Savantes, where Isou read his sound poems out loud. The next year, Gallimard published his Introduction to a New Poetry and a New Music. From there, in numerous publications that followed in rapid succession, Isou communicated his desire to radically transform society and applied his theories to all areas of art and culture, most notably in poetry, film, painting and political theory. He would eventually publish over 200 books, containing his ‘hypergraphic’ writings, ‘metagraphic’ images, plays, theoretical writings, polemics, wall posters, etc.

In the plastic field, Lettrism is based on the merging of image and word. The plastic use of the letter or sign would not signify anything other than itself, thus transcending traditional conventions of meaning by emphasising the form of the letter over representation. Isou conceived Lettrism as fundamentally different from movements that preceded it, representing a complete shift from figuration and abstraction to the plastic use of the symbol of letters or signs. While Isou acknowledged that some artists associated with the Bauhaus and Cubism, and artists such as Marcel Duchamp, approached qualities of Lettrism, Isou declared that these artists ultimately faltered by subjecting letters to function and burdening them with meaning, rather than granting them independence and allowing them to become pure form. As Isou wrote in 1961: ‘... the important thing was not to introduce letters into painting, but to reduce the whole picture to letters, or rather, to the order of letters.’2

1One year later in 1952 Guy Debord separated himself from the group and founded L'Internationale lettrisme, and later the Situationist movement. color="#999999">

Other works by Isidore Isou

Isidore Isou
La Révolution française expression di soulévement de la jeunesse
1989
See all works by this artist →
One always arrives to at something which one can no longer depict.
Dieter Roth