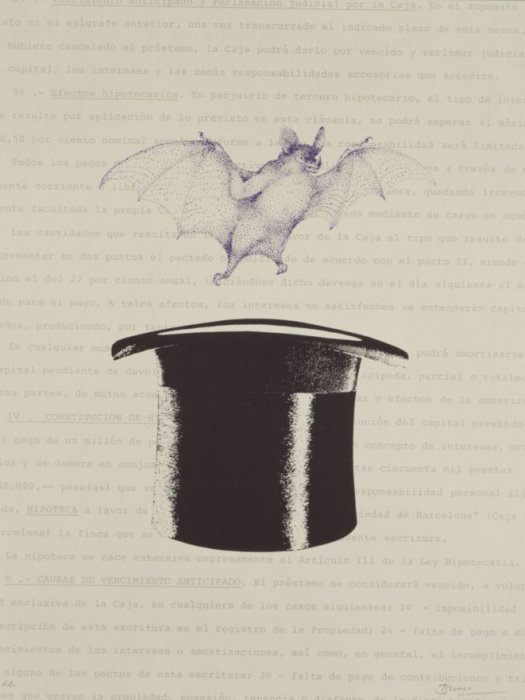 How did you arrive at visual poetry?

I started doing poetry in the classical sense of the literary code and, in fact, I decided to write plays because I was seeking another dimension to plain literature; I thought that the theatre offered me this other dimension. Maybe it was the movement. In poetry, I started working with language a lot; later I noticed the bulk of the wig and knew that if I could remove this wig I’d be able to show the head of the poem. Many people never take this step. All this led me – especially in Em va fer Joan Brossa – to a very expressive poetry, anti-rhetorical, direct, without many adjectives, but with vibrancy – this vibrancy, if you don’t have it, you can’t learn it, you either have it or you don’t. It’s the duende [spirit]. And the duende, Lorca says, is not a thought, it is a power. And from here to visual poetry is another step. Everything has been a process. Moreover, as I’ve had to work in difficult times, I’ve always been interested in publishing, but it’s never been my main objective. I think everything has become coherent, not gratuitous. One thing develops from another until a building is formed. A communion, a contact between different things that fit together.

I’m essentially a poet. I work in different fields but my starting point is always poetry. All I do is move along different channels. Deciding which channel to use is an automatic, unconscious process. Sometimes I do literary poetry and at others I feel like doing visual poetry. When a poet has something to say, he can express it in different languages, but it will always be poetry. My theatre production, for instance, is performance poetry because it needs the fourth dimension of the theatre. Mine is not a declamatory theatre, or literary in the strict sense of the word. It is a theatre where the text has the same poetic importance as the tempo of the curtain going up and down or the colour of a ballerina’s leotard. Everything is closely related, like the lyrics and music in a song.

Joan Brossa
Duet
1998
See all works by this artist →