This selection of the MACBA Collection took up two floors of the Museum, as well as the atrium and the hall, and was the most extensive public showing of the MACBA holdings that had been held to date. It set out to analyse the history of contemporary art from the point of view of the present, while also looking forward prospectively towards the art of the future.

The first part of the exhibition consisted of a chronological sequence of works from the period spanning from the forties to the first half of the eighties. It began with the work of the painters from Dau al Set: Modest Cuixart, Joan Ponç, Antoni Tàpies and Joan Josep Tharrats. This was followed by Catalan Informalism and its international equivalent, with Antoni Tàpies’ materic work prominently featured. There was also an overview of spatialist trends, which included sculptural works by Leandre Cristòfol and Moisès Villèlia, as well as the sculptures created by Josep Subirachs in the fifties. Conceptualism from the seventies was mainly referred to through documentation given that the Museum did not yet own works from this period. There were also pop art and surrealist references to the New Figuration that emerged at the time, and its links to neo-expressionist figurative paintings linked to the transavantgarde movement.

The ground floor of the Museum focused on works produced between 1987 and 1997. The criteria for setting up and ordering this section was different to that of the historical part of the exhibition. The artworks were not organised chronologically or according to any logic that set up relationships of dependency amongst them. Instead, a more open approach was chosen, with various points of access and a path that allowed for complex interrelationships in more than one direction. This section revolved around ten leading artists who were chosen either because of their links to Catalonia, the inherent significance of their work, or their influence and impact on other artists of the time. This was particularly clear in the case of Miquel Barceló, Ferran Garcia Sevilla, Juan Muñoz, Josep M. Sicilia, Susana Solano, Francesc Torres and Zush. This section, entitled Last Years, remained open after the exhibition ended and was incorporated into the following exhibition of the Collection, which was the first to be organised by the Museum’s new director, Manuel J. Borja-Villel. 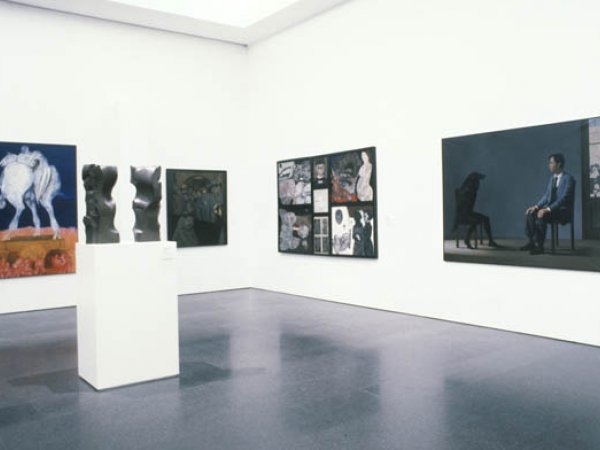 Discovering the Collection, 1997-1998 (exhibition views)
One always arrives to at something which one can no longer depict.
Dieter Roth