Let’s talk about… understands exhibitions as powerful devices that activate the imagination and generate discourses that often exceed those anticipated by the institution or preconceived by the curatorial team. In Let’s talk about…, artists, thinkers and various agents, together with the visitors, activate exhibitions from concrete perspectives that generate personal readings of them.

Let’s talk about…
The role of the document: activating archives
This itinerary invites us to reflect on the image understood as a document in the broadest sense. What do different types of documentary images mean? What are they for? How can they be activated? Based on the exhibitions Akram Zaatari: Against Photography. An Annotated History of the Arab Image Foundation and Forensic Architecture: Towards an Investigative Aesthetics, we will experience different ways of activating visual documents: either through playing with the materials of a photographic archive, as in Zaatari’s case, or through the use of images found on the Internet and used for research in open code by the Forensic Architecture group.

As an artist, Akram Zaatari works with the huge repository of the Arab Image Foundation, an archive he cofounded and which has brought together more than 600,000 photographic images coming from Lebanon, Syria, Palestine, Jordan, Egypt, Morocco, Iraq, Iran, Mexico, Argentina and Senegal. Weaving together the macro and the micro, these documents narrate, in a partial, subjective and molecular way, the daily processes and political changes from the end of the nineteenth century to the present day. With these documents, Zaatari traces unexpected stories to reveal the poetics of the hidden.

But if the archive can be used to tell a story, it can also be activated as proof. The Forensic Architecture group works with the repository of the Internet, based on audio-visual material posted by eyewitnesses in war and other extreme situations. The research group collects these images interpreting them with tools such as geo-location or the calculation of the height of a cloud of smoke caused by an explosion, in order to determine the details of crimes denied by their perpetrators. Thus, the study of the image goes beyond itself, providing evidence that can be used in international courts. In a way, the iconographic tools are expanded and exceeded, impacting on our scenario of perpetual conflict.

Both approaches have different relationships with very different archives, but both propose the role of the image as a historical witness that can inform us as to what has taken place. Between other people’s nostalgia and the politics of the present, between historical reflection and intervention, they allow us to think about the meaning of the document and the visual archive. For those of us who come from a tradition as logocentric as that in the West, it is well worth noting how the image claims its role as a place of knowledge ready to be activated.

With Julia Ramírez Blanco, a historian and art critic specialising in the intersections between art, politics and utopia. Author of the book Utopías artísticas de revuelta, she is currently developing her research at the UB (Juan de la Cierva programme), within the Art Globalization Interculturality group. 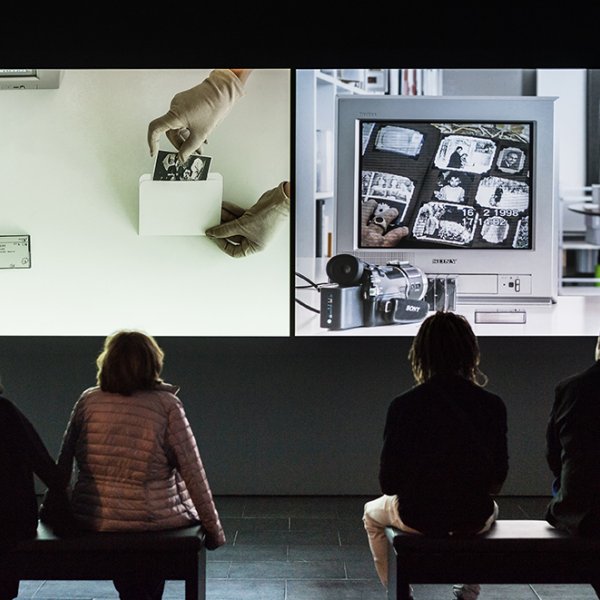 Exhibition view of the 'Akram Zaatari. Against photography. An annotated history of the Arab Image Foundation' exhibition
Share
Recommended bibliography

Let's talk about... the role of the document Julia Ramírez
I like to work with what is often called "cultural heritage", but the materials that I use are banal and clichéd, like sugar blocks, doors, couscous, rugs, official documents.
Latifa Echakhch