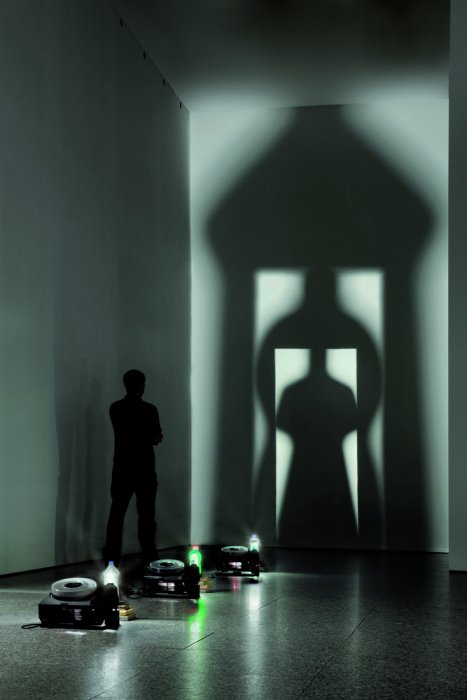 Since the 1990s, Eulàlia Valldosera has been using light and its formal experimentation as key elements in her installations. Despite its apparent simplicity, an elaborate game of projections, filmic devices and images projected onto the space establishes a dialogue with aesthetically poor, everyday objects from the domestic world. Cleaning products, dusters and other everyday elements are used in installations that place the viewer in a magic place reminiscent of the ancient shows of Chinese shadow play. These are works that reflect on women as intellectual and vital subjects, and deal in notions of identity, maternity, illness, absence, dependency, home, family and memory. With a very effective visual language, they bring into question the stereotypes rooted in the collective imaginary. Envasos: culte a la mare (Vessels: The Cult of the Mother), 1996, is one of her better-known works.

'Plastic bottles containing household cleaning products are scattered on the floor in a random manner. The bottles stand against the ray of light of the slide projectors with empty carrousels, so that their shadows are projected onto the wall as enlarged silhouettes. Their profiles superimpose and combine with one another forming figures on the wall that recall the female body. They visualise various aspects of the relation mother-daughter, woman-wife-mother, woman-mother, archetypal concepts of femininity all of them, yet also suggesting other symbolic aspects such as woman-fairy or woman-seducer. In a corner of the room, an antique ceramic vessel forms an anamorphic profile next to images of other antique vessels from different cultures.' (Eulàlia Valldosera, 1996). In the installation, as the artist herself explains, different slide projectors with empty carrousels and scattered across the floor project onto the wall images of plastic bottles of cleaning products on a monumental scale. The shape of the projected bottles, distorted and magnified, evokes feminine figures in homage to maternity or to the omnipresent and universal figure of the mother. The theatrical yet simple result is highly symbolical.

In a corner of the room, next to the projection, an antique ceramic vessel forms an anamorphic profile. The vessel was found in the foundations of the artist’s family home when it was excavated. Next to it, images of other antique vases from different cultures are projected. Since the days of matriarchy, these primitive vessels have contained basic elements for the survival of the species, such as liquids, food, medicinal products, or the ashes of incinerated members of the community. They were made by women who remained in charge of them. Nowadays, bottles containing cleaning products are still used mostly by women.

Envasos: culte a la mare was initially conceived as an installation for the remodelled space of a church. It evokes a gigantic vessel containing the viewers, while the forms projected on the wall invite them to get onto their knees, a common physical gesture when scrubbing floors or attending a Christian rite. The kneeling position adopted by women for washing the floor is also the position of prayer, a mixture of submission and devotion.

Other works by Eulalia Valldosera 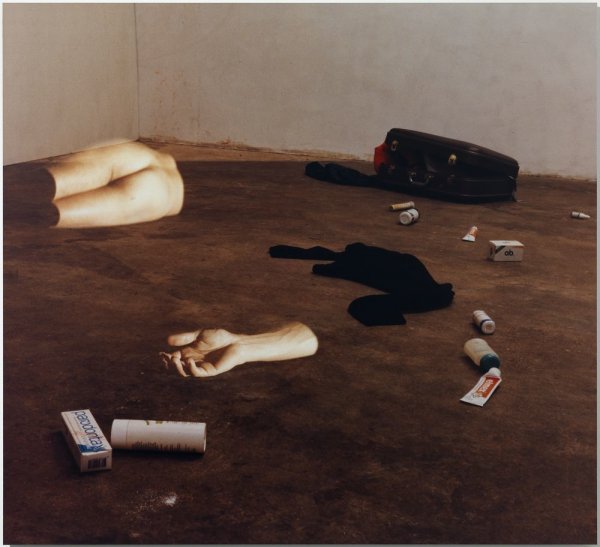 Eulalia Valldosera
Construcció i deconstrucció (I-VIII) (El melic del món #1; El ventre de la Terra #29)
1991-2001
See all works by this artist →
The artist has to face the unknown with a positive mood and sink his teeth in without fear.
Eduardo Chillida