'I wasn't in Paris when Hains found the first poster. There are different versions going around, but I think that it was in Paris, on Rue du Montparnasse, between Boulevard du Montparnasse and the Edgar-Quinet crossroads. The police soon turned up, because every time Hains takes a poster, the police come running.' That's how Jacques de la Villeglé, friend and collaborator of Raymond Hains, describes the origins of the urban practice of collecting torn posters and reappropriating them in order to turn them into works of art. Hains began this practice in 1949. He called it 'affiches déchirées' or torn posters.

This practice aligned him with 'decollagistes' such as Leó Malet, a second-generation surrealist who set out to reformulate Dada collage. Even though Dada had subverted the compositional elements on the surface of the paining, it didn't venture beyond the walls of the artist's studio. Decollage stepped out of this traditional framework, adding an element of the new mass culture: the advertising billboard or 'affiche américaine'. Hains and other decollagistes turned the act of tearing and removing layers of posters on the streets into part of the creative process.

The two works in the MACBA Collection both date from the latter part of Raymond Hains's career. Although he started out pasting fragments of posters onto canvases, from 1957 onwards he used construction site metal fencing in what are known as his 'palissades'. These works encapsulate the main features of Hains's body of work: they are ironic references to the large-scale paintings of Abstract Expressionism, they blur the boundary between the site and material of art and consumer culture, and they dispel the myth of artistic genius. In describing himself as an 'inaction painter', Hains questioned the value of the artist's signature, taking art practice to the level of the streets. 'Toulouse Lautrec, for instance, made posters, but I harvest them, I abduct torn posters. And contrary to popular belief, I don't shred posters; I take those that have been torn by passers-by.'

A torn poster has the weight of other lives and uses, it accumulates displacements and transformations. Hains rejects readings that see his posters as abstract compositions stemming from subjective, individual expression. Eschewing an aesthetic interpretation of his works, he feels closer to the situationist theories of Guy Debord and other theorists of the derive and the detournement, which he predated. It was Debord who talked about psychogeography and the observation of certain random processes on the streets as one of the principles of his work. But the constant movements through the urban topography, in the manner of a nomad or a flaneur, are also at the core of the work of Raymond Hains. In its reappropriation of billboards in spaces that are usually colonised by advertising which turns people into potential consumers, his work is a revolt and an elegy of urban action and topography.

Other works by Raymond Hains 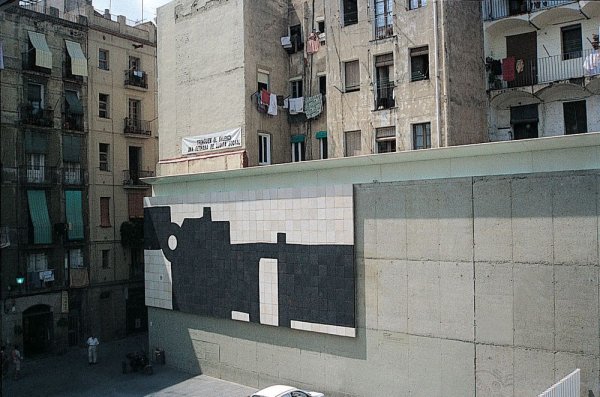 Raymond Hains
Sense títol
1998
See all works by this artist →
I don’t think about art when I’m working. I try to think about life
Jean-Michel Basquiat