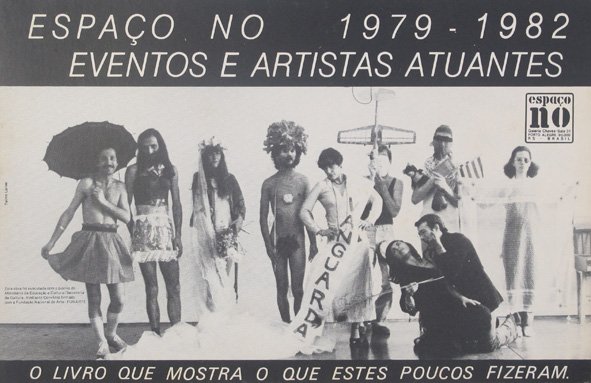 The second section is dedicated to Espaço N.O. and includes many of the catalogues, programmes, pamphlets, invitations and posters produced by the centre to promote its many exhibitions and activities.

Nervo Óptico was an artist’s collective founded in Porto Alegre (Brazil) in mid-1976 during the informal meetings of a group of artists, who decided to join forces against the commercial interests of the art market and the government cultural policies of the time.

In September 1976, the group wrote a manifesto that openly criticised the ideology of the art market as a conduit for cultural policies, and declared its commitment to spreading works that stemmed from an alternative way of conceiving art. The document was ultimately signed by eight artists and published in the local press. It was later disseminated at the exhibition Actividades continuadas at MARGS on 9 and 10 December 1976.

The group’s subsequent meetings, which always included a high dose of creative content, were held in the Clóvis Dariano’s photography studio. A great many photographs were taken to document the improvised actions of the participants, which were often humorous, ironic, irreverent and based on imaginative games.

In April 1977 the group, which was down to six members – Mara Álvares, Carlos Asp, Vera Chaves Barcellos, Clóvis Dariano, Telmo Lanes and Carlos Pasquetti – launched a collectively produced publication as a means of publicising their works. It began with a print run of one thousand copies that were distributed free of charge through universities, bookshops and galleries, and sent to art critics in Brazil and other countries. This monthly publication, which lasted for thirteen months, was called Nervo Óptico, a name that was later officially adopted by the collective.

The common thread in the work produced by the artists in the group was the use of photographic images, which also served as a record of their actions, performances and installations. Nevertheless, the only member of the collective who considered himself a photographer was Clóvis Dariano, who explored the fragmentation of the body and of space through photomontage.

The members of the group remained strikingly faithful to their original intentions: to transform art into an experience-field, to question artistic experience without abandoning an interest in its informative nature, and to demystify media and techniques and reformulate them on a level where artworks are activities or processes rather than end products.

From 1976 to 1978, the group organised four group shows and experimented with super-8 films, slides and performances. Nervo Óptico finally disbanded in 1978.

Taking its lead from Other Books and So… in Amsterdam, this cultural space was initially conceived an avant-garde artists’ cooperative and gradually evolved into an “alternative centre for culture.” Its main activities consisted of compiling documentation around contemporary art, promoting events and exchanges with artists from Porto Alegre and other cities, and democratising artistic production and consumption channels. As a result, the Centro Alternativo de Cultura Espaço N.O. was launched at Galería Chaves in Porto Alegre on 1 October 1979, with an exhibition of mail art, films, projects and artist’s publications by the Brazilian artist Paulo Bruscky. Telmo Lanes designed the group’s logo.

Espaço N.O. aimed to become a non-commercial exhibition space, to promote forms of expression that were carriers of new languages in the visual arts but also in music, theatre, dance and literature. The group also set out to favour the exchange of these new languages among other centres and artists, from Brazil and elsewhere, and to this end it organised courses, meetings and conferences around contemporary art.

In its two year existence, Espaço N.O. organised twenty-two group exhibitions and nineteen solo shows, which is proof of its enormous vitality. The programme included projects by artists such as Hudinilson Jr., Marcelo Nitsche and Hélio Oiticica, alongside exhibitions by local artists and works by the founding members and other guest artists. There were also numerous meetings with artists and intellectuals who were active at the time, lecture programmes, courses, film screenings, concerts, dramatic readings, etc.

Espaço N.O. disbanded in 1982. In that same year Vera Chaves Barcellos transformed the space into a contemporary art archive that became a valuable source of information on the artistic context of the time.