With clear references to navigation, WRITTEN ON THE WIND presents one of the most significant artists of the past fifty years through the humble but essential medium of drawing. The exhibition offers an insight into the work of Lawrence Weiner (New York, 1942) through his drawings, which are probably the least known aspect of his oeuvre. WRITTEN ON THE WIND is an exhaustive survey of the works on paper by this artist who has shown that art does not require a physical medium. Weiner employs the democratic, universal element of language to create works that range from intangible objects –his famous word sculptures– to sound pieces and film.

For the first time, MACBA presents a show dedicated to Weiner's drawings. Inspired by the gestural nature of the medium, the
graphic and visual quality of drawing is used to structure the exhibition, eschewing a chronological narrative in favour of an intimate look at the interests and obsessions of the artist, and offering a privileged insight into his work and his vision of the world.

The art from the second half of the twentieth century onwards would not have been the same without Lawrence Weiner's crucial contributions. An American with strong links to Europe, Weiner has played an exceptional role in expanding the notion of art as we understand it today. His works have taught our eyes to separate a work of art from its physical medium and to disassociate physical and aesthetic qualities.

In 1960 Weiner used dynamite to create sculptures by means of 'subtraction' in a national park in California. In 1964, audiences who attended his show in New York discovered that they had to decide the final form that the works would take. In 1968, Weiner created a work at Windham College in Putney, Vermont, that involved positioning a series of stakes in the ground at regular intervals and stringing twine between them to form a grid. When the students cut the twine because it hampered their access to the campus, Weiner realised that he could have created the same effect without the need to physically materialise the piece. That same year, he formulated the famous declaration of intent that has guided his work since then, and that is a milestone in the history of contemporary art.

1. The artist may construct the piece.
2. The piece may be fabricated.
3. The piece need not be built.
Each being equal and consistent with the intent of the artist, the decision as to condition rests with the receiver upon the occasion of receivership.

Since then, Weiner has used language as a material to create works that demand the active participation of the observer. Once it has been freed from its appearance and its physical state, an artwork exists in as far as it is formulated through language and inhabited by the spectator. Based on these premises, Weiner has made language the central element of his work, meticulously selecting precise formulations that he interprets in their most objective sense. Weiner sculpts with words. One of his key pieces, SOME OBJECTS OF DESIRE (2004), has been on permanent display on the main wall of the MACBA atrium since 2009 as part of the Museum's collection. This huge 'mathematical equation' emphasises the relationship between human beings and the different types of objects that exist in the world.

When Drawing is Saying

Weiner is not a romantic artist, but he is interested in many of the great themes of classical art. From the drawings presented in this exhibition, we can conclude that he is an artist for whom life resembles the act of navigation, in which the horizon, the stars in the sky, and the cardinal points are necessary to find a place in the world. More than as an artist who 'writes in the wind' –an extremely intense metaphor for our dependence on nature, but also for the fragility of all that is said and is done–, Weiner appears to us as an artist of his time, a chronicler of change, of what flows in and what drains away. We won't find in Weiner's work any vestige of nostalgia. We will come upon a recognition of the volatility of the sub-lunar world compared to the permanence of the stars: navigating through the artist's work would become the navigation through every world possible.

The curatorial purpose of WRITTEN ON THE WIND is to establish an open dialogue with Lawrence Weiner's 'works with paper.' The exhibition, articulated around gestures of meaning, is open to the subjective perception of each participant. In his notebook publication for Documenta 13 Weiner writes, EACH GESTURE IS A BID FOR COMPLICITY, suggesting that gestures evoked on surfaces aim to shape the way we see and turn the sensory into the physical.

Drawings, like his music, films and videos, provide Weiner with a structure that expresses other needs and another kind of interaction. We can see that for Weiner, drawing functions almost as an autobiographical document to recount the discovery of an event, whether remembered or imagined, and to adapt multiple forms ranging from simple notes to animated film drawing. This exhibition attempts to represent the different states of drawing per se that comprise Weiner's body of work.

The visual narrative Lawrence Weiner has created for both the catalogue and exhibition forms a mise en scène that carries with it a process of editing and refining, reflected in different types of material. On one hand we have drawings made in series. They tell us a story and speak of the artist's obsessions: how we face the world, financial crises, natural disasters, Polaris, the search for horizons. These narratives are but fragments, notes that are not readable on their own but enrich the content of each to the other in a web of disconnected thought helping us to make sense of the moments or happenings that the series reflect. As we match the different types of drawing in the exhibition with different levels of language used and ponder their positioning in the rooms –central walls, gestures, perimeters, serial groupings– it is apparent that there are no hierarchies or categorisations in the work, together the drawings form a coherent mass. 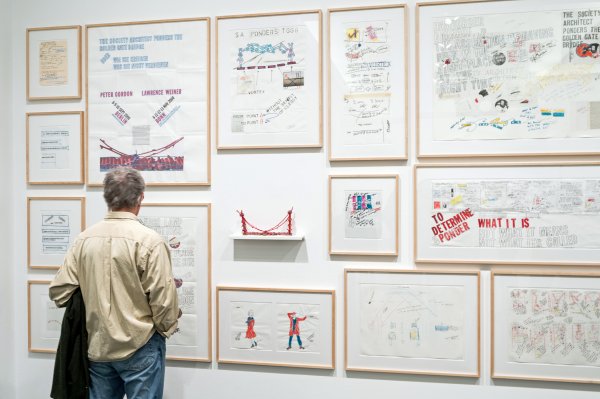 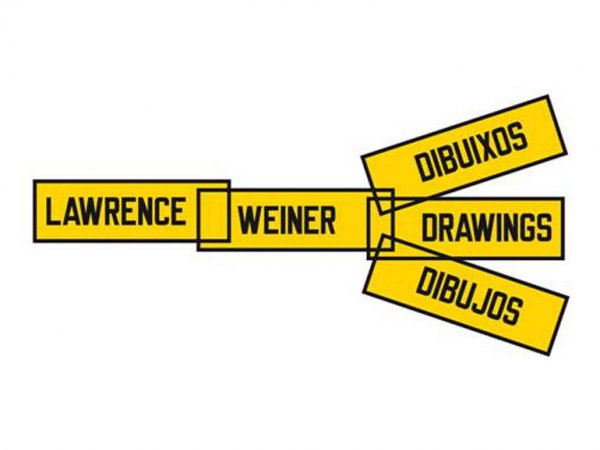 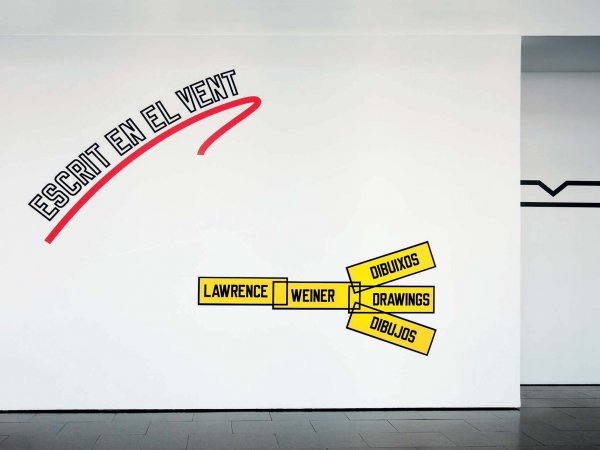 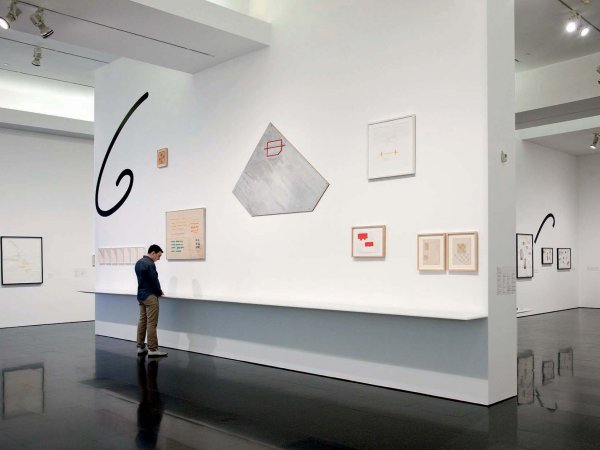 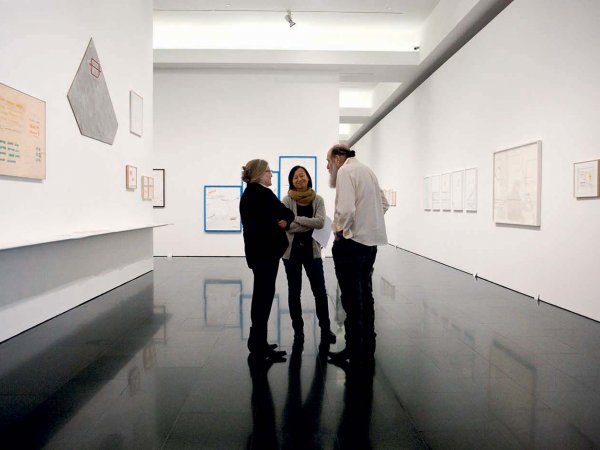 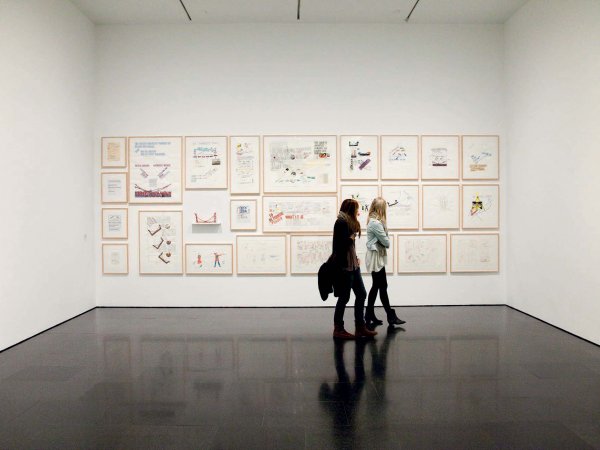 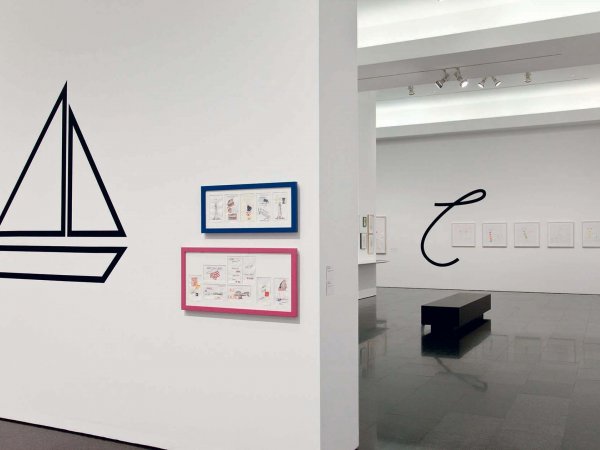 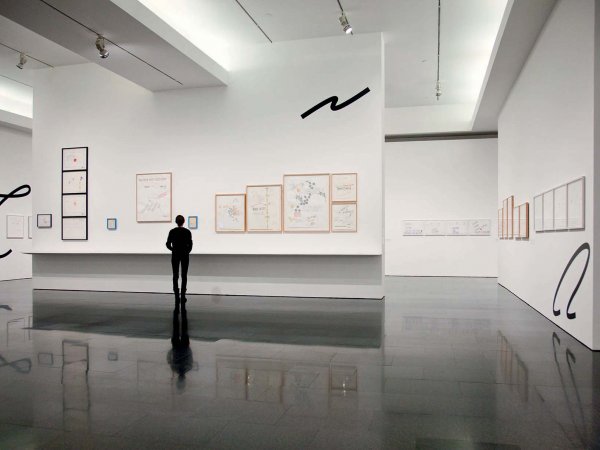 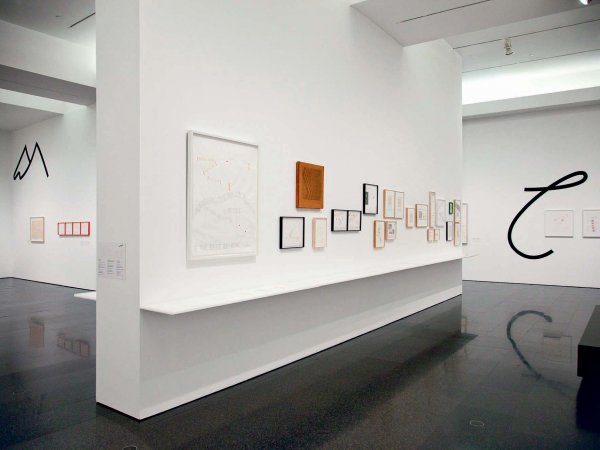 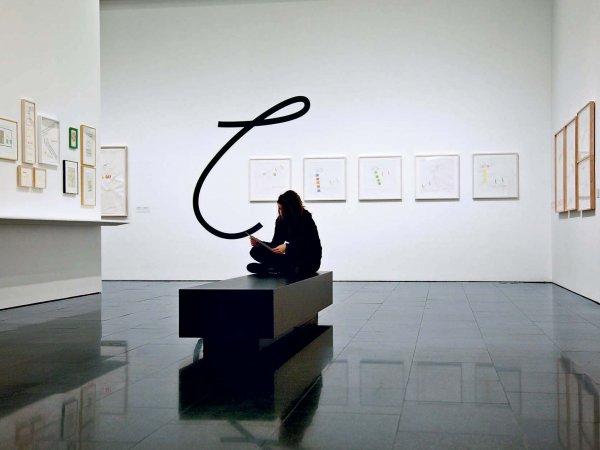 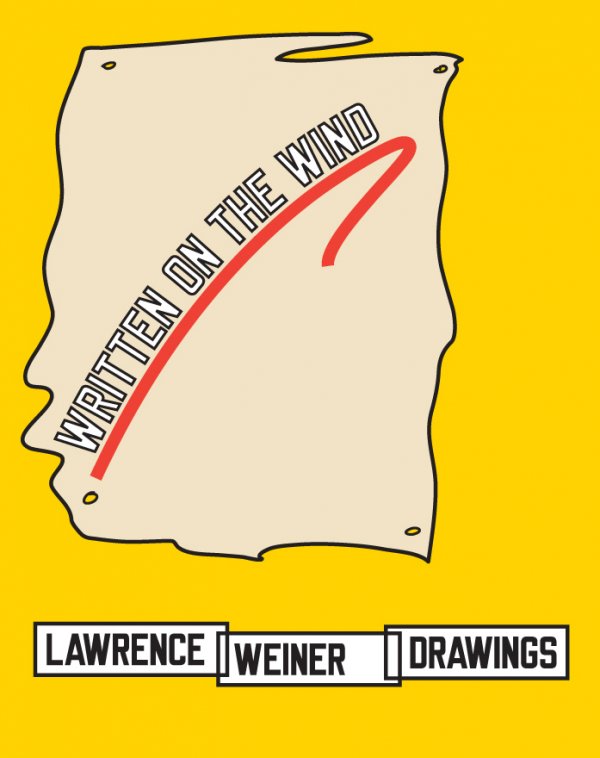