Once again, the MACBA collaborates with the Loop Festival showing the work of Wael Shawky, Cabaret Crusades: The Path to Cairo, 2012, in the Tower room on 4, 5 and 6 June.
The work will be seen showed as part of the MACBA Collection exhibition: Desires and Necessities that opens on 18 June. Check out the hours.

Cabaret Crusades is an epic trilogy that tells the story of the medieval crusades from the Arab perspective. Wael Shawky has created three animated videos, the triptych formed by Cabaret Crusades: The Horror Show Files (2010), Cabaret Crusades: The Path to Cairo (2012) and The Secrets of Karbala (2014). Based on the book of essays The Crusades through Arab Eyes, written in French in 1983 by the Lebanese historian Amin Maalouf, Shawky rewrites the bellicose expeditions of the eleventh to thirteenth centuries, which the Western papacy sent to the Middle East to re-conquer the Holy Land. Made with puppets rather than actors, this trilogy has made Shawky one of the most significant contemporary Egyptian artists.

Cabaret Crusades: The Path to Cairo (2012) has been part of the MACBA Collection since 2014. This is a horror film that follows the events after a Western order sent half-a-million Franks to a military campaign to ‘re-conquer’ Jerusalem from the Muslim army. Classical Arabic – the language of newsletters and texts from the Koran – endows the filmic narrative with the voice of authority. It was shot with 120 clay figurines handmade by the artist. Whereas for the first film of the trilogy Shawky used two-hundred-year-old wooden figures borrowed from Daniele Lupi and the Lupi Family Collection of Turin, in this film the artist made his own clay puppets following the craftsmanship techniques of the provincial region of the Aubagne, which he knew firsthand from an artist residency. The clay, which brings toughness, along with Shawky’s designs, result in terrifying and grotesque figures. Some have an animalistic appearance with misshapen noses and camel’s teeth. Through these figures, Shawky creates a mythical and surreal atmosphere that blends drama and cynicism. It does not create the illusion of realism or hide the strings that manipulate the characters. On the contrary, they become a metaphor to highlight the inevitable power networks in the construction of history. Regarding the music, the film incorporates choirs of children and adults who interpret themes from the Bahraini musical tradition, characteristic of the Persian Gulf.

The failure of dialogue, the manipulation of historical narrative and the persistence of culturally inherited stereotypes are the targets against which Shawky’s grotesque characters rally.

A project by LOOP Barcelona in collaboration with MACBA. 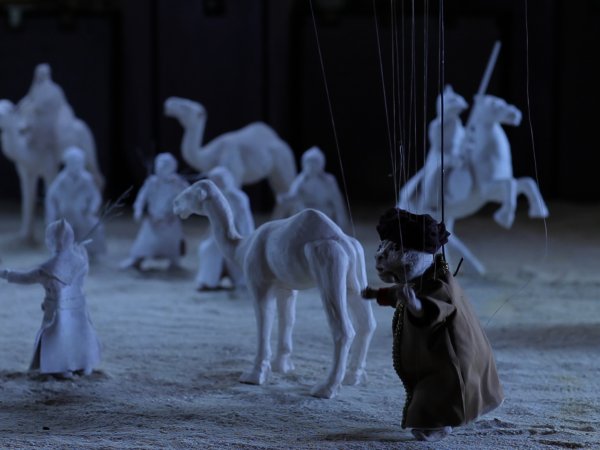 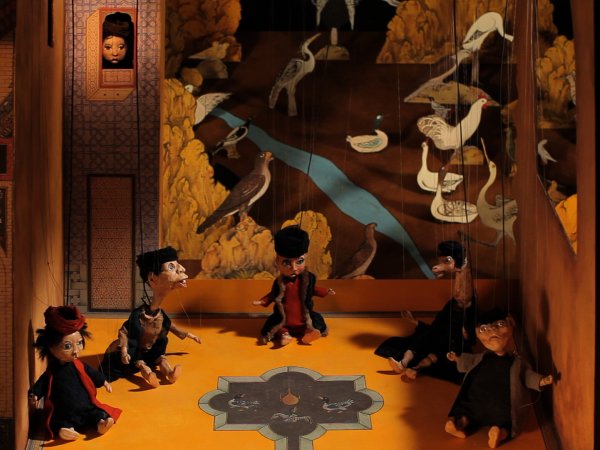