The 7th Congress of the International Council of Societies of Industrial Design (ICSID), organised by the Agrupació de Disseny Industrial del Foment de les Arts Decoratives (ADI/FAD), was held in Eivissa (Ibiza) from 14–16 October 1971. What might have been a conventional professional meeting became, in the Spanish context, an unprecedented event. For three days, what the ICSID did in Eivissa was not just an open congress where professionals and students could meet and debate; it was a point of convergence between design and the most experimental forms of art and architecture at the time in Spain. In this sense, it preceded the Encuentros de Pamplona (Pamplona Meetings) that took place the following year, and which could be seen as a prolongation in an urban context of the innovative spirit that the ICSID had developed in a natural environment. The exhibition is an attempt to recreate that event and the ideas that are still relevant today: sustainability, participation, solidarity, new relations between industry and society, and the liberating powers of art. It includes
documentary material, photographs and films, from various archives and from the MACBA Collection.

In 1971, the ICSID Congress was held at Cala de Sant Miquel, a bay on the north-west coast of Eivissa, away from the usual urban venues. In the context of Franco's dictatorship, dominated by repression, censorship and lack of freedom, Eivissa was still a relatively unspoilt environment, sparsely urbanised. Thanks to the intellectuals and artists who had settled there since the thirties (Hausmann, Benjamin or the architects from GATCPAC), avant-garde and transgression coexisted with a rural culture, very tolerant of visitors and capable of reconciling opposing aesthetic and social tendencies. Placing the event on a beach gave it the feeling of intimacy and camaraderie that the organisers had intended. Among their members were André Ricard, Joan Antoni Blanc, Enric Tous, Ferran Freixa, Daniel Giralt-Miracle, Francesc Pernas and the Grup Obert de Disseny Urquinaona (Urquinaona Open Design Group).

The Congress wanted to avoid any kind of programming on principle. It was structured in the form of 'speaking rooms' (in the two hotels on the bay), where presentations and discussions on design, urbanism, art, new technologies and ideas took place. Among the participants in these meetings were Xavier Rubert de Ventós, who spoke about puritanism in design; the artist José María Yturralde, together with members of the Centro de Cálculo from the Universidad Complutense de Madrid, who advocated the use of computers in design; Jordi Cerdà, a student at the Escola Massana at the time, who presented his study on the subject of time by using cinema as a means of communication; and a group of students from Escola Eina, led by Lluís Pau, who put forward a critique of the situation of design in our country. At the hotels, there was also a concert by Pau Riba and exhibitions of popular crafts from Eivissa and modern design, while the firm Olivetti introduced Implicor, an innovative multiple audiovisual system. Coinciding with the Congress, Eivissa's Museu d'Art Contemporani organised an exhibition of kinetic, programmatic and technological art.

In parallel to this, a series of events relating design to other media were also organised. One of the most successful was Instant City, a project based on current research on the use of new materials such as plastic, especially in inflatables. Although these materials had originally been used only for military purposes, by the sixties they were being applied to everyday life and leisure. Groups such as Archigram and Haus-Rucker-Co, or architects such Frei Otto and Hans Walter Müller, are good examples of it. Instant City was created to provide accommodation for students attending the Congress. Carlos Ferrater and Fernando Bendito, both students of architecture at the time, established themselves as an Ad Hoc Committee and drew up the Instant City Manifesto, together with Luis Racionero. The manifesto, which was distributed worldwide, defended participation as a way of building a city based on work as a means of communication. José Miguel de Prada Poole, a professor at the Universidad Politécnica de Madrid and a specialist in inflatable architecture, provided the technical knowledge behind the project: an ephemeral city, made of plastic, and based on a simple construction system of geometrical figures. Interconnected cylinders and spheres that could be developed as needed. Technology became a liberating instrument, available to the layman. Instant City rejected, on ideological grounds, the city as a space that conditions the behaviour of its inhabitants. It was also in favour of collective work being inseparable from leisure, in order to create new forms of coexistence based on creativity.

For the opening of the Congress a dinner, in the form of a multicolour ceremonial, was organised by the artists Miralda, Jaume Xifra and Dorothée Selz, in collaboration with Carles Santos and an orchestra. These Ceremonials were ritual parties where the décor and coloured food had a central and transgressive role, contrary to the rigidity of established social conventions. Artists and public participated as equals. Muntadas and Gonzalo Mezza created Vacuflex-3, a mobile sculpture made from an industrial green plastic tube over 150 metres long. The interactive intervention consisted of carrying the tube to the different areas around the bay. It became a playful object with which it was possible to sculpt in a spontaneous manner, to create inscriptions of words in the sand or the water: art could be a game. Josep Ponsatí installed a large inflatable sculpture on Cala de Sant Miquel, made of big white plastic balloons, which measured forty metres in length at one point. Being in constant movement, the organic forms kept changing. It was a different way of looking at art.

The Congress was an experience that opened the way for experimental practices toward architecture and design in the Catalonia of the 1970s. It gave a voice to the diversity of tendencies and generational initiatives in the field of design, which were brewing since the previous decade with the break up of Escola Elisava – which favoured a more industrial approach – and the creation of Eina – with its more humanistic vision of design associated to art. The parallel activities, especially Instant City, enjoyed a great participative response, in line with the do-it-yourself spirit of the Congress.

The ICSID Congress in Eivissa was an experiment in socialisation, an example of how communal work, vitality, intellectual reflection and leisure can be used to promote dialogue, and of how imaginative proposals can be created to structure new models of behaviour. As Prada Poole said when referring to Instant City, the ICSID Congress in Eivissa was proof that 'utopia is possible'. 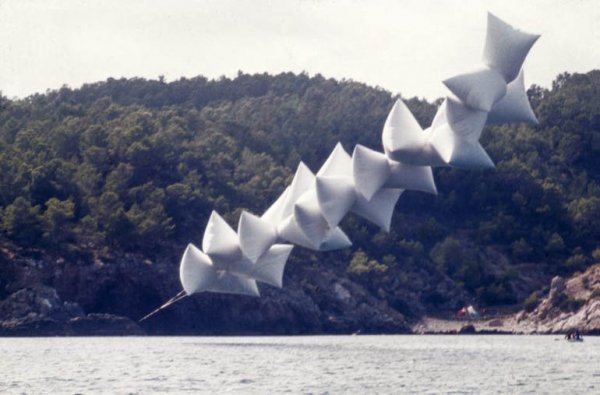 Utopia is possible. ICSID. Eivissa, 1971 Round table regarding the exhibition
Lectures