"I've a feeling we're not in Kansas anymore", Dorothy Gale admitted to her dog Toto when the two of them landed in the wonderful land of Oz after having been sucked into a tornado. This line of dialogue from Lyman Frank Baum's famous novel The Wonderful Wizard of Oz (1900) inspired the title of the first retrospective exhibition on the work of Thomas Bayrle (Berlin, 1937). The artist's ironic, critical, repetitive and obsessive fictions of abundance placed visitors in a disconcertingly familiar scene.
Official art history has deemed Thomas Bayrle to be one of the leading exponents of pop art in Germany. And while the influences of this movement are undeniably present in his work – as are those of conceptual art, concrete poetry, cybernetic art, Fluxus and the new cinema of the sixties and seventies – Bayrle's link to each of these is a tense creative dialogue. Like other European pop artists, Bayrle denounces the excesses of mass culture, but his focus is on the relationship between the individual and the mass.

The exhibition brought together three hundred works spanning from the sixties to the present, including wallpapers, "painting machines", digital animations, watercolours, drawings and photo collages.

This exhibition offers an overall vision of the praxis of German artist Thomas Bayrle (Berlin, 1937) from the end of the 1960s until now. The beginnings of his work were conceived in a key historical, moment in the recent history of Europe, at the end of the 60s. This was a moment defined by the need to create a new conception of the cultural identity and aesthetic sensibility of a country in a state of upheaval, Germany. Frankfurt, the city Thomas Bayrle was living and working in, became one of the most important centres of protest. The economic miracle following the Second World War had reached its end and the need to completely revise the ideological bases and structure of existing hierarchies had become urgent for a generation that felt the need to write history in other terms and to actively create cultural alliances different from those of preceding generations. The atmosphere generated by the American presence in Germany, the crisis in the Middle East and the war in Vietnam undoubtedly marked the starting point of an œuvre that has remained attentive to the possibility that change can be produced in the world we know, and new and different future might emerge.
The aim of the exhibition is to familiarize the spectator with a particular artistic method and logic. While it is true that, at first sight, Bayrle's work seems very close to the aesthetics of the Pop movement, it is no less true that this feeling becomes less powerful as we discover many features that are totally at odds with the American movement.
The arrangement of the works in the museum's entrance space and in the galleries is not strictly chronological. The first installation we encounter is entitled SARS Formation (2005). It consists of various modules of cardboard suspended in space. Each of the units is made up of a complex interlacing of expressways. The title refers to the Severe Acute Respiratory Syndrome diagnosed for the first time in Asia in 2003. This work combines many of the elements recurring in Bayrle's œuvre: the continual references to China (more specifically, Mao's China); to highly technified societies in which the individual subject is conceived as part of a machinery that moves the entire social body; and the expressway, an image that immediately evokes notions of circulation, communication, travel and speed. A system of expressways suspended in the air is pure potentiality: An organism, that appears spontaneously and forces the course of events to generate chaos, but also the possibility of a change; it opens the door so that known reality and the theories that explain it are displaced by a new force, a new logic.

The inner wall of the museum ramp is papered with one of his most representative works, Potato Counters (1968). The title refers to the cultivation of the potato in China, and to the numerous articles on the subject that Thomas Bayrle read in German Maoist magazines, to which he subscribed for years. In them, images tell the story of the achievements of locally improved seeds, which turn the Chinese harvests and the revolution into a success. Not very far away we can see another of his wallpapers: Raport/ Stadttapette (1997-2009). This is a photographic collage that shows the view of a city; a forest of buildings grouped cumulatively. It's an urban space in black and white, a dense mass of multiple housing units, an inventory of rational spaces for living and for developing modern life. It's an ordered, yet organic network through which move thousands of men and women who go to and from work each day.
The space is repeated because the functions it must respond to are the alike: providing transport, maximizing resources, electricity, etc. The city is all one, but it conceals many differences. In the late 70s and early 80s Bayrle created numerous works that respond to this principle. They are often photographic collages on wood that depict various landscapes we might describe as being entropic. Most of them are in the first room of the exhibition, alongside some of the drawings and watercolors of the early period.

Bayrle's work as a whole is defined by an awareness of time as a sense that keeps us permanently on course towards the future, to the conquest of new limits. The possibility of a break taking place, of creating a caesura in the continuity of the unfolding of history, or of provoking a crisis that is capable of calling the world into question and even leading to a genetic mutation which turns the human being we know into an unknown species, is expressed in a multitude of forms and media. All we need do is look at some of the works made in the 1980s, one of the strangest and most expressive moments in his career. Capsel (1960-1983) is a mural made up of many drawings that show a couple trapped in a capsule, similar to those hotels in Japan consisting of niches more than rooms. The drawing simulates a computer illustration of quantum mechanics. Body and space are formed by an arrangement of lines and the difference between the volumes is what indicates the difference between the two. Here is a man and a woman trapped in space, the universe, with no possibility of escape, since all is identical; no distinction exists between matter and non-matter, between the organic or non-organic. They are trapped in a continuum and not even time exists. They both know this. She throws her hands in the air. This claustrophobic sensation is even greater in the digital films shown not far from the mural in question. Thomas Bayrle has made more than one filmic experiment in which montage plays a crucial part. The film loop provides him, almost naturally, with the effect of endless repetition that attracts him so much. To the works made in 16 mm in the 1960s and 1970s must be added a whole series of digital horrors, in the best sense of the word, which he produced between 1980 and 2006. Horror has to do with excess, with a lack of adaptation. The computer not only enables him to digitally reproduce a given element ad infinitum, just as he was doing manually in his graphic work or even in his painting, but also to add volume and three-dimensional effect to the resulting image. Thereby he provokes a feeling of deformation that has nothing to do with the representation of an image, but with the non-adaptation of the latter to the optics of the camera or even to the TV monitor that reproduces it. He achieves a breakdown in the system or a perverse game with the possibilities of technology to appear.

The vocabulary and even the technique that Thomas Bayrle utilizes are not new. The newness resides in his ability to combine and to push graphics, collage, painting and film to the aesthetic limit with to the purpose of investigating the possibilities of change that might appear on the horizon. Thomas Bayrle is trawling our most immediate past, the modernity of the 1960s, ‘70s and ‘80s. His work can be understood as a sweep through the aesthetic dimension of pop culture designed to create not a nostalgic memory of the past but the vision of a future that is yet to come. His œuvre places us before the possibility of relating emotionally to change, of granting us strength in the face of the unknown, of whatever kind it may be, utopian or entropic; In Thomas Bayrle's work, the unknown will always be a motor for the machinery of thought.

Become a Friend
Share
Chus Martínez "The means of the method" from the publication "Thomas Bayrle. I've a feeling we're not in Kansas anymore"

A conversation between Thomas Bayrle and Lars Bang Larsen, theorist and curator 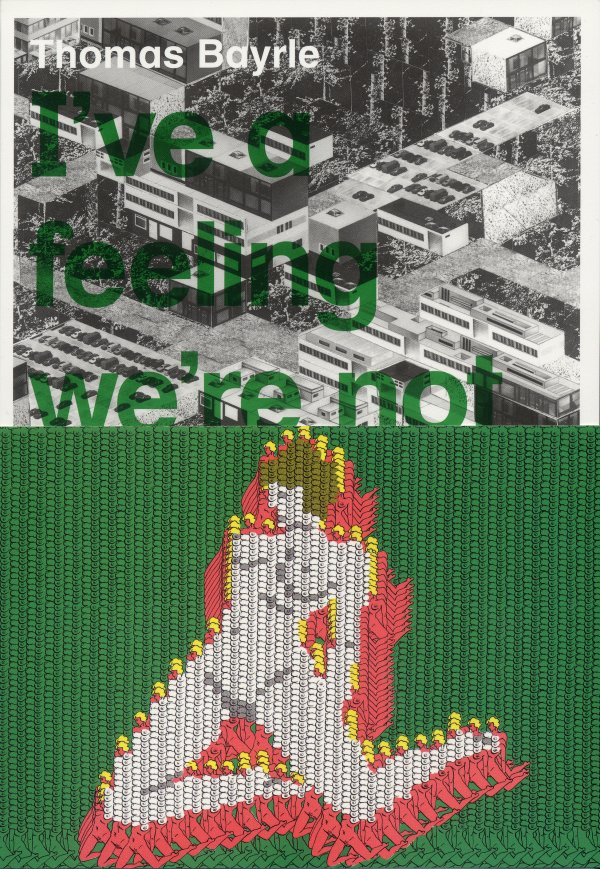