Robert Whitman (New York, 1935) is considered to be one of the precursors of performance art and a pioneer in the use of new technologies as a tool for artistic creation.

His earliest experiences in the field of performance art took place in New York in the late fifties, alongside artists such as Jim Dine, Red Grooms, Allan Kaprow and Claes Oldenburg. But Whitman’s actions soon moved away from the immediacy and radicality of his colleagues and into more poetic and oneiric grounds. Using elaborate systems of projections of light, shadows, slides and films, Whitman creates environments that weave together fantasy, reality and fiction.

Robert Whitman. Playback was the first exhibition on Whitman’s work to he held in Spain. It presented an extensive sample of the works produced by the artist between the early sixties and the late seventies, including footage and photographs of his performances, some of his most notable Cinema Pieces – Window (1963), Garbage Bag (1964) and Shower (1964)–, and a series of drawings based on Dante that had never been shown before.

Robert Whitman was born in New York in 1935. He studied literature at Rutgers University from 1953 to 1957, and history of art at Columbia University in 1958. In the late fifties he began to present performances, including his innovatory works American Moon (1960) and Prune Flat (1965), and to show his multimedia works in some of the most influential experimental venues in New York. In 1966, with the scientists Fred Waldhauer and Billy Klüver and the artist Robert Rauschenberg, Whitman founded Experiments in Art and Technology (E.A.T.), a heterogeneous association which organised joint ventures between artists and scientists. He had individual exhibitions at the Jewish Museum, New York (1968), the Museum of Contemporary Art, Chicago (1968), and the Museum of Modern Art, New York (1973). DIA organised a retrospective of his works for the theatre in 1976. Some of his theatre projects have visited venues around Europe, such as the Moderna Museet, Stockholm (1987 and 1989), and the Centre Pompidou, Paris (2001 and 2002).

Whitman, one of the first of a heterogeneous circle of artists to adopt the fledgling language of performance, conceived a distinctive personal style. His theatre works were distinguished by a poetic, fleeting phantasmagoria. To express the illusion and reality of a dreamlike physical world he used projections by a series of resources, from shadows to slides and films. Silent cinema and ritualistic, atavistic theatrical forms inspired his hallucinatory vision.

His performances in the early sixties coincided with the making of a group of half a dozen sculptures, which he called Cinema Pieces. In them the projection of film animates everyday objects. This is not documentary cinema: the spectator is always aware of the cinematic procedures due to his clever use of technical resources. He combines film techniques (close up and zoom), to achieve intimacy, with structural resources (situations in real time and space) to help direct contact.

Later on he turned to engineers, scientists and similar experts to explore the possibilities of fusing optical effects and representations of reality. In his evolution his growing conviction of the imminent possibility of a marriage between art and technology played a vital role, a conviction that was widely shared at the time. The new alliances between artists interested in electronics and scientists attracted by the possibility of working on interdisciplinary projects configured the aesthetic climate of the last part of the decade. Those convictions were behind the Experiments in Art and Technology association (E.A.T.), founded in September 1966 by Whitman, the artist Robert Rauschenberg and the scientists Fred Waldhauer and Billy Klüver.

For Whitman, technology has only been a means to an end. It does not matter if in a particular work he uses an advanced hardware, improvised second-hand materials, or simply paper and pencil. What counts are the underlying abstract relations that define and individualise an experience – colour, form, rhythm, space and time structures –, all condensed and distilled in his definition of the implicit “image”.

The retrospective studies the works from that influential period of his career, from the early sixties to the late seventies, exhibited on very few occasions, and reaffirms not only their presence but also their currency and timeliness in an aesthetic atmosphere divided by the introduction of ever newer technologies. Nevertheless, the exhibition Playback has an additional interest: it shows his work as the model of a kind of invention based more on the ingenuity of poetic resources than “technological tricks”. 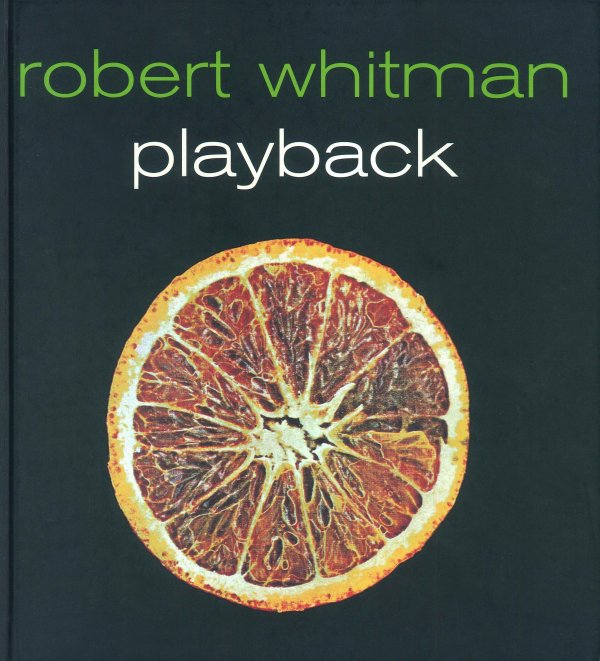