In the late fifties, the mass media became the principal means of transmission of the ideologies and narratives of Western society, which was firmly rooted in consumer capitalism. The new generation of artists that emerged in Europe at the time rejected the purely aesthetic concerns of the post-war informalists and approached artistic practice as a critical tool for political reflection and social action. Joan Rabascall turned his critical and ironic gaze on the banality and perversity camouflaged behind the mass media discourse.

Women as a consumer objects, the violence that radiates from media images, the anxiety that accompanies consumerism, and the way in which tourism swallows up identities are some of the Rabascall's concerns.

Joan Rabascall. Production 1964-1982 was an overview of a specific period in which the artist's work shifted from analysing the ideological repercussions of technological advances to denouncing the manipulation of the transmission of history by the powers that be. After 1968, his initial use of collage was gradually replaced by photographic emulsions on canvas and prints on metal and, in the eighties, by sculpture and installations.

The exhibition by Joan Rabascall (Barcelona, 1935) organised by the Museu d'Art Contemporani de Barcelona focuses on the works created by the artist from the beginning of the 1960s until the early 1980s, an era in which the use and manipulation of images from the mass media constructs a discourse that is openly critical of the mechanisms, messages and platitudes these media impose. Joan Rabascall's work is therefore situated at the center of a "perverse" and well-honed vision of the critique of the object and of consumerism that develops in Europe, in contrast to the fascination for industrial products of North American Pop. In 1961 Rabascall was living in Paris and from there he traveled to London and to Amsterdam, where he met the critics and theorists Lawrence Alloway, who coined the term "Pop art" in 1958, and Pierre Restany, intellectual father of French Nouveau Réalisme. Rabascall came into contact with the avant-gardes of his day, the Independent Group in England and the Nouveaux Réalistes in France, who rehabilitated techniques of representation and aesthetic and ethical positions close to Berlin Dada, and he speaks to us of a culture of the printed image in magazines and the mass media that would quickly give way to television and the moving image. Social criticism, linked to political positions of denunciation and revolt, led him to explore culture's dependence with respect to the economy, fashion and politics, and to develop, in the 1970s, ideas about the construction of history, the cultural and political oppression of Francoism, and the impact that tourism – a nascent industry at the time and one of today's most powerful – had on landscapes, whole regions and languages.

Joan Rabascall worked in collaboration with artists like Benet Rossell, Jaume Xifra and Miralda in the creation of "rituals" in Paris (1969 and 1970). Close to artists of the Sociological Art Group in 1974, he soon distanced himself from the latter in order to pursue an important individual praxis embracing technique and content, discourse and attitude, in the face of the growing commercialisation and mediatization of the art object during the early 1980s.

The Rabascall. Production 1964–82 exhibition is articulated around different series in which the artist analyses the problematic of the image and its transmission. Between 1964 and 1968 Rabascall created a series of collages based on images drawn from the print media, with a strong critical content in relation to the enchantment exercised by the product and the inducement to consume (Mass Media, 1967), the stereotypes of women's image as a sexual object of desire (Obsession, 1964, or La Super-Femme, 1967), the increasing militarization and violence of society with the depiction of weapons and atom bombs (La Bombe, 1966; Atomic Kiss, 1968), the model of North American life as a paradigm of social wellbeing (American Way of... , 1970) and the culture of leisure (Golf Competition, 1968), the progressive computerization of power and of forms of knowledge (IBM 360, 1967), political celebrities (JFK, 1965), and human and scientific advances (Le Sourire du cosmonaute, 1965), among others.

The Textes series (1972-1973) pokes fun at the absurdity which governs European rationality through artistic discourse (Un appartement où votre Vasarely aura sa place, 1972, or Monsieur le Ministre, 1972), political discourse (with the slogan Tout va bien, 1972) and economic discourse (Table des matières, 1973), and foregrounds the tension between coherence and the impossibility of meaning in the word or text.

In 1974 he made, together with Benet Rossell, the film Bio Dop, an attempt to dismantle the advertising image on the basis of disarticulating a publicity film for a brand of hair cream by means of desynchronicity and collage.

The first part of the exhibition ends with the presentation of the hitherto unseen installation Bandera olímpica (1972-2009). As a result of the holding of the Olympic Games in Munich in 1972, Joan Rabascall was invited, along with other artists, to develop a project about the Games. The attack on the Israeli delegation by a Palestinian terrorist group made the presentation of the project impossible at that time. The work analyses the commercial and ideological clichés to do with the Olympic phenomenon, as well as the confluence of political, economic and commercial factors around the values that subtend the Olympics.

Presented in the second part of the exhibition is an ample selection of canvases from the Spain is different series (1973-1977), some of which form part of the MACBA Collection, together with the original models and collages. This series offers an acid vision of the cultural and political state based on the slogan launched by the Ministry of Tourism, headed by Manuel Fraga Iribarne, and aimed at attracting mass tourism to the Spanish State. The contrast between the idea of liberalisation intrinsic to the wish to promote tourism (Naturally Spanish, 1977) and the reality of the country remains obvious in the play of contrasts in the imagery (Horario de misas, 1975, or Clasificación moral, 1975); in the linking of television and football (Gol, 1975); and in the economic data and the list of international companies that invest in the country, alongside the image of the dictator (Franco hace deporte, 1975, or La desfilada dels negocis, 1977).

The installation Elecciones Show (1977–78) has to do with the spectacle the first democratic elections after the death of Franco were turned into. Three desynchronised projections show images of the destape, or process of liberalisation: the first female nudes appearing in magazines of the day, images of mass demonstrations, and images of politicians from the first legalised parties. While the soundtrack pumps out songs of the period, the election posters of that campaign stretch forth across the ground. A counterpoint is presented in the "toy" 23-F. Reflex condicionat (1981), in which a mechanism activates a beetle that scales a Guardia Civil's tricorn hat before arriving at a little TV on which the King's face appears.

In Paysages souvenir (1975) Rabascall counterposes tourist postcards of German localities where concentration camps had existed during Nazism with photographs of the same places now. Like this, the way in which tourism effaces history in order to create the stereotype of a place is made explicit. A few years later he addressed the issue of landscape once again, this time by analysing the changes wrought by the tourist industry, and in the series Paisatges Costa Brava (1982), the contrast between the idyllic landscape which seeks to attract visitors and the landscape transformed by the massive arrival of tourists who modify the relationships of order between the world of the spectator, the visitor and local people. On this occasion Rabascall becomes a photographer, he doesn't use images from the print media but manufactures them himself as an observer who participates – at a certain distance – in the process of transformation he depicts.

Exhibited regularly in France, Rabascall's œuvre from that period is but little known in this part of the world. In 1970 the critic Alexandre Cirici wrote, "We often encounter Rabascall's name among the promoters of research events in Paris, London or Amsterdam. Of late, we find him involved in the curious phenomenon of the resurgence of the ceremonial. In Catalonia, however, he goes on being very little known. That's why we think it's necessary to talk about him." In fact, we must wait until 1985 to be able to see his work in the exhibition Barcelona-Paris-New York: el camí de dotze artistes catalans 1960-1980, and in the projects presented at the Virreina in 1993 and the Centre d‘Art Santa Mònica in the year 2000.

The exhibition organised by the Museu d‘Art Contemporani de Barcelona analyses a period in the work of Rabascall that extends from the media landscape to the landscapes of ideologies, technological changes and their impact on the consideration of what is human, the way in which the media delimit the construction of historical memory, and the position of art as an antidote and counterpoint to the trivialisation of ideas.

Travelling production credits: An exhibition of the Research Centre for Artists' Publications, organised with the Museu d'Art Contemporani de Barcelona and the State Corporation for Spanish Cultural Action Abroad, supported by the Institut Ramon Llull and the Instituto Cervantes Bremen 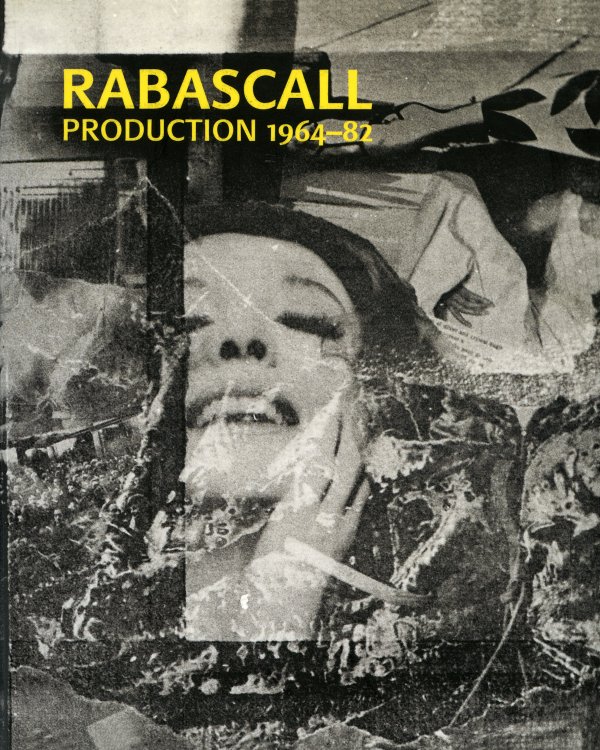