The MACBA presents the most extensive show to date of the Annick and Anton Herbert Collection (Ghent, Belgium), which is not yet widely known by the public. This exhibition, which will take up most exhibition rooms of the Museum, includes one hundred fifty works by the most well known artists from Minimalism, Conceptual Art, and Arte Povera.

For Annick and Anton Herbert, collecting art is about compromising and, at the same time, participating in social structures. They began to collect in 1973. Driven by a desire to find depth and compromise in relation to their acquisitions, they chose languages that avoided grandiloquence and over-confidence. In the Herbert Collection there is no place for the spectacular; no Pop artists, no Neo-expressionists, nor those representatives of the emphatic or “passionate gesture.” Nor are diffuse structures, such as the happenings, the Fluxus movement, Viennese Actionism or performances to be found. Annick and Anton Herbert, committed defenders of the reductivism of Minimalism, Conceptual Art, and Arte Povera, converted the defense of what is “essential”- not “superficial”- into one of their collecting guidelines. As a consequence, their first acquisitions were works by Carl André, On Kawara, Dan Graham, Lawrence Weiner, Daniel Buren, among others. The Herberts’ attitude, however, did not represent any isolated case. Gallery owners such as Konrad Fischer, Fernand Spillemaeckers, Jack Endler, Art & Project, and Nicholas Logsdall developed similar guidelines supporting determined artists, which ended up consolidating into a definite stance.

The timeline of the Herbert Collection is organized around two extremely important political moments: the student revolt of 1968 with its emphasis on the emancipation and liberation of the individual, and 1989, which marked the end of communism and the beginning of an era of technological revolutions. This gives the collection an undeniably political profile: the young counter-revolutionary movement, the rebellion against the restorative tendencies of the post-War years, the reconsideration of the relationships between the sexes, and the sensibility of a generation confronted with society’s power structures.

Subjectivity, partiality, independence, quality, and flexibility are all characteristics of the Herbert Collection, the spirit of which was explained by Anton Herbert in one sentence: “We have not collected works of art, but a new way of thinking.”

Conceptualism and Abjection. Towards Other Genealogies of Conceptual Art
Lectures 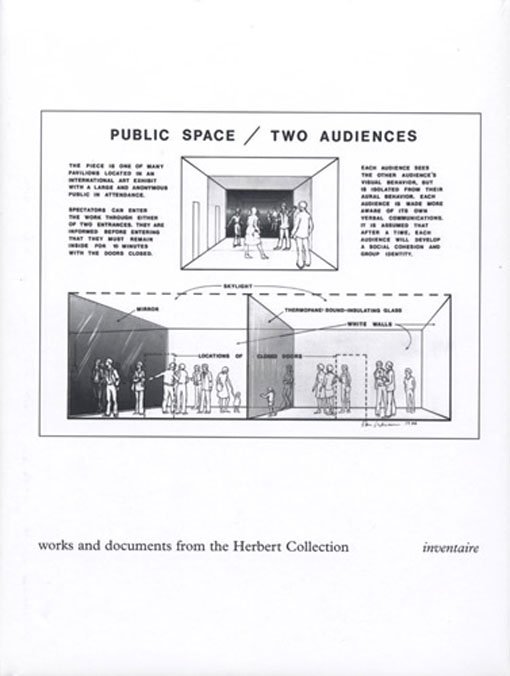 Exhibitions
Public Space / Two Audiences. Works and Documents from the Herbert Collection. Inventaire
Manuel J. Borja-Villel, Diedrich Diederichsen, Anton Herbert, Hans-Joachim Müller, Peter Pakesch...
I like to work with what is often called "cultural heritage", but the materials that I use are banal and clichéd, like sugar blocks, doors, couscous, rugs, official documents.
Latifa Echakhch