Out of Print presented a selection of seven hundred works and documents drawn from the Archive for Small Press & Communication (ASPC) at Neues Museum Weserburg, Bremen. This archive, founded by Anner Marsily and Guy Schraenen in 1974, consists of around 35,000 pieces, including graphic and sound works, multiples, records, newspapers, magazines, postcards, posters, videos and books. Most of these materials have some connection to projects that took place at Galerie Kontakt, the gallery founded by Schraenen in Antwerp in 1966.

The material in the ASPC collection reflects a period in which artists turned to alternative means of publishing and communicating their ideas to a public that was no longer satisfied with traditional arts circuits. As such, it represents the most significant trends and practices of the sixties, seventies and eighties: Body Art, mail art, Land Art, Fluxus, Conceptual art, Minimalism, Pop Art, performance, visual poetry and concrete poetry.

Out of Print presents over seven hundred works and documents covering a broad spectrum of materials drawn from the Archive for Small Press & Communication (ASPC) at Neues Museum Weserburg, Bremen (NMWB).
The archive dates back to 1966, with the opening of Antwerp's Galerie Kontakt, run by Guy Schraenen, who organised exhibitions and activities related to the material that gradually became part of the ASPC: readings, radio broadcasts, concerts, etc. Between 1973 and 1978, Schraenen also run a publishing house where he produced about a hundred books, visual poems and sound recordings. This publishing house was formed to advocate the works and ideas of the artists shown at Galerie Kontakt and to provide a record of ephemeral artistic actions carried out on the fringe of conventional art institutions.
The archive consists of some 35,000 pieces that reflect the evolution of visual art from the sixties to the eighties and represents a wide range of trends, making the ASPC the most complete archive of the period in Europe. Body art, conceptual art, Fluxus, land art, mail art, minimalism, performance, pop art, visual poetry and concrete poetry are all well represented. The collection includes graphic art, records, multiples, newspapers and magazines, postcards, posters and artist books from over twenty-five countries, as well as documents published by museums and galleries.
Read more
Become a Friend
Share 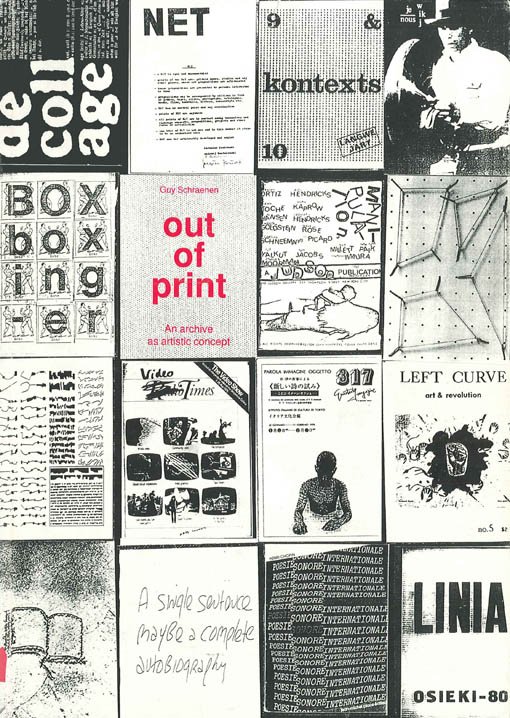 Exhibitions
Out of print. An archive as artistic concept
Guy Schraenen