The Collection assembled by Reinhard Onnasch (Görlitz, Germany, 1939) consists of over one thousand pieces (paintings, sculptures and installations) that chart an unusual route through the history of the art produced between the fifties and the present. The collection is an unusual one because Onnasch has always felt a predilection for artists who work on the fringes of the dominant trends; because his interest has been in artistic singularities rather than movements; and because his activities as a gallery owner have led him to purchase art that is not intended to decorate the walls in his house, but to fill museum galleries.

Onnasch began his collection in 1968 when he opened his first gallery in Berlin, which would later be followed by one Cologne and another in New York.

The Onnasch Collection was the first major international exhibition of the German collector’s works. It brought together some 170 pieces by 59 artists, which basically fall into Abstract Expressionism, American Pop Art, new European Realism, Minimalism and Conceptual Art, although the showcase overstepped these stylistic and chronological boundaries.

The MACBA will show, for the first time in Spain, an extensive selection from the private collection of the German art dealer Reinhard Onnasch. This collection is a synthetic vision of some of the most important international aesthetic trends of the second half of the 20th century. The exhibition will be made up of 170 works, basically paintings, sculptures and installations, organised in chronological order.
Born in 1939 in Görlitz, an old city on the border between Germany and Poland, Reinhard Onnasch started out as an art dealer; as such he became interested in contemporary art. His collection, which he started to build up in the early-1970s, is a peculiar one, markedly different from most contemporary art collections of his time. This is partly explained by the fact that he started out as a dealer, but also by his predilection for antagonism and contrast, which helps to give his collection a singular profile, lacking in other contemporary art collections and making it a reference for international collections.
Read more
Become a Friend
Share 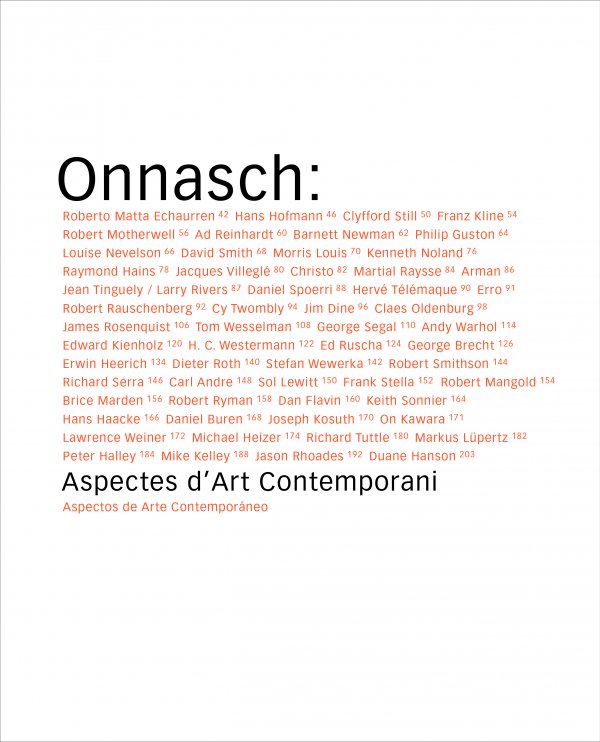