Only one piece of hand luggage is allowed, it cannot exceed six kilos, it must comply with the company's rules and there will be an extra charge for every additional piece of hold luggage. This is the check-in policy of low-cost air companies. On the gangway that connects the airport to the embarkation gate people do not look at each other, they are too busy minding the trolley bags they carry. The main concern is always the same: board the plane quickly, find a space in the overhead locker not too far from one's seat, stay seated so as to avoid the hassle of other people looking for seats, snuggle into the minimal space provided and forget everything until the plane finally takes off. The ceremony of disembarkation is a similar one, everyone leaves in a hurry anxious to arrive at this famous city, Barcelona, and be able to experience the sun, the tapas, the shops, the beaches… in other words, the city.

During a working session in Berlin, in which the subject of the transformation of the city as a result of German reunification in 1989 was discussed, Haghighian pointed out that, with this pilgrimage of trolleys from the airport to the centre of Barcelona, or to any other tourist destination, we end up feeling that we are all responsible for the system, regardless of the reasons why we happen to be travelling anywhere. Tourists or not, we are all helping to create a curious urban space, where cultural construction and consumerism go hand in hand. In particular, Haghighian refers to the growing number of 'creative'professionals – musicians, architects, designers, etc. – who have to travel for work, or to the artists who decide to go and live in a city without any real prospects, simply because it was until recently one of the cheapest in Europe, and how this creates a constant a flux of people coming and going from the city.

Back in Barcelona, the rattle of hand luggage on the city pavements shares its protagonism with the bottle of water. Both these objects interact in Haghighian's installation at the Capella MACBA: a trolley bag slowly running over a one-and-a-half-litre bottle of water. It seems to have fallen on it by accident; the bottle hasn't yet been crushed by the weight of the luggage, but it is trapped in between the metal bars of the retractable handle. Added to the sheer banality of such objects in the context of an artistic space is the fact that they seem to belong to no one. Therefore, they are no longer objects, they are pieces of junk belonging to another world, another context – that of the world outside the Capella, but not to this space. The slowness of the trolley bag makes the scene less dramatic, until we realise that this movement is the origin of the sound we hear all over the space. In fact, next to the place 'of the accident' there is a microphone capturing the sound of the bottle being crushed, while a computer reproduces it live through eight audio channels. The loudspeakers are distributed along the side chapels. They don't all play at once, so there is a sense of them answering each other, an echo. It is a subtle way of putting forward the questions already mentioned without the need to represent any of them. Avoiding representation makes sense; it forces us to think about these issues without reducing them to a single image, without burying the message in a couple of sentences that might help understand it. At present, there are those who suspect that we need to face up to the opposite. We may have underestimated the political expediency of thinking of the enemy as such, and accepting that 'hostility' and exposure to 'hostility' are necessary for reinterpreting public life. The bottle of mineral water is simply that, a banal artefact under a microphone that amplifies the sound of an inert material in an empty space. A suffocating noise that occupies the totality of the space and turns us into listeners of a random artificial sound non-conducive to dialogue. This bottle is not a proposal, it is a small hostile scenario that makes us think of other scenarios beyond our control. Or maybe not.

In the adjacent chapel – known as the Renaissance Chapel – the artist has included an image of a special fountain in the history of the city, in an attempt to refer to a very important historical event: the 'liberation' of water during the Spanish Civil War. In particular, the collectivisation by the Sociedad General de Aguas de Barcelona (SGAB) from 1936 to 1938, when water pipes were extended to the poorest neighbourhoods and drinking water was free. The image shows a citizen stocking up on water, and is accompanied by a fragment from an already classic book by George Orwell, Homage to Catalonia, in which the author describes this scene. It is a simple gesture related to an effort: the fight for survival in the midst of a war, at a time when the city was under siege.

Not far from this image there is an object. A fountain made with an unprecedented material: a pile of IKEA catalogues. Catalogues that appear to be the same except that they come from different countries: Germany, Spain – with its Spanish and Catalan versions – France and Britain. All identical, like the bottles of water, and yet different, for they are adapted to the consumer needs of every country and every nation. IKEA, with its historical slogan, Everything beautiful for everyday life, changed today to A better everyday life, signalled its intention to produce not just basic household goods, kitchenware, crockery and furniture, for the largest possible number of people, but also to make them beautiful, following aesthetic criteria as well as functional. Like the water, design should also flow in a democratic society where the differences in class are increasingly smaller, and where the codes of representation signified by objects are the same for everyone. A model of rationalisation of basic objects, in the same way as the bottling of water made public fountains redundant.

Haghighian's work uses the mechanisms that produce and alter our form of representing, from an image to a question. Representation is a way of ordering the elements of the real to assimilate them 'at once'. To resist this system of summaries or to analyse how it works is to investigate a model of thought inherited from the Enlightenment: deduction. The West favours convergent thought, i.e. the search for a solution to every problem, the reduction to a cause, to an image that 'gives expression' to a question. And yet, divergent thought, or the capacity to look for more than one solution to a specific problem, implies a change not only in the logical conclusion to an idea, but also in how an image, an argument or artistic practice itself emerges.

Exhibition curated by Chus Martínez, organized by the Museu d'Art Contemporani de Barcelona and coproduced with the HAN NEFKENS Foundation.

Read more
With the participation of: 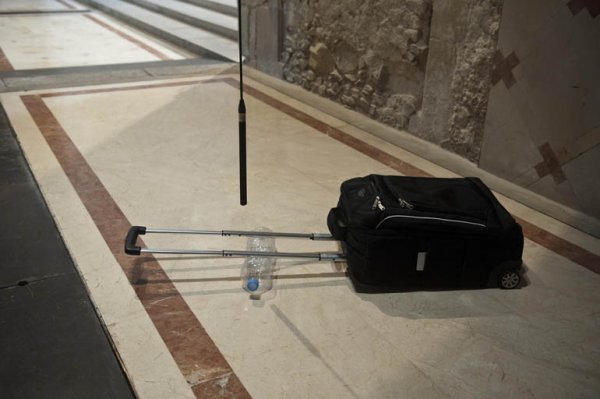 Why and How do I Do what I Do? The artists speak
Lectures
Educational activity 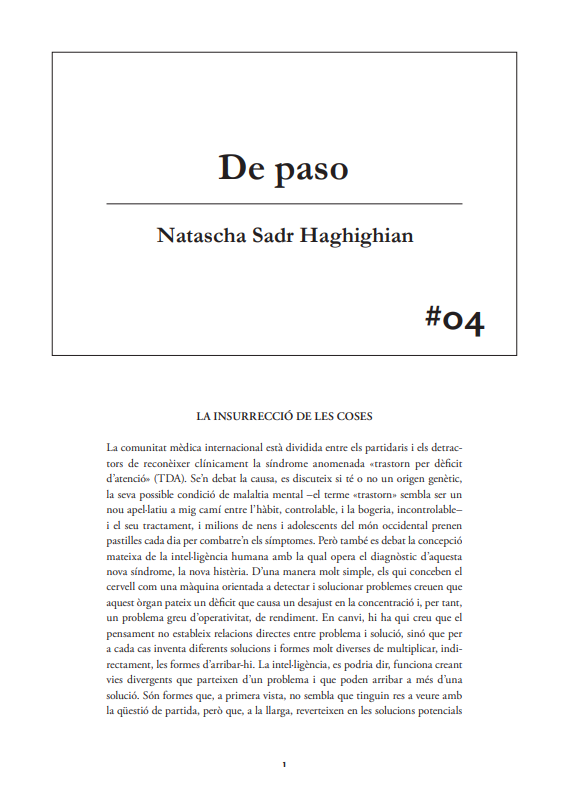 Exhibitions
#04 Natascha Sadr Haghighian. De paso
Chus Martínez
I like to work with what is often called "cultural heritage", but the materials that I use are banal and clichéd, like sugar blocks, doors, couscous, rugs, official documents.
Latifa Echakhch