Mike Kelley: 1985-1996 was a retrospective exhibition based on the most significant works produced by Mike Kelley (Detroit, Michigan, 1954) in the preceding ten-year period. It consisted of around a hundred works in a range of disciplines including paintings, sculptures, installations, photographs, watercolours, architectural mock-ups and videos.

From the very beginning of his artistic career in the late seventies, Mike Kelley has engaged in a critical analysis of the religious, psychic and economic conditions that make up the foundations of Western civilisation. The artist draws on popular culture – its symbols, milestones and seduction mechanisms – to develop a syncretistic discourse in which psychoanalysis, the history of visual culture and the media converge. In his work, the triviality of human existence and the banality of everyday life are transformed into grotesque, surrealist structures tinged with sarcasm.

Mike Kelley was born in 1954 in the city of Wayne, near Detroit (Michigan). He studied at the University of Michigan – Ann Arbor (1972-76) and, later, at the California Institute of the Arts in Valencia (California), where he attended classes given by Douglas Huebler and John Baldessari, among others. He participated in exhibitions of enormous international prestige, such as the Documenta in Kassel, the Sidney Biennial and the Biennale in Venice and his work has been exhibited in the world's leading museums. The Whitney Museum in New York presented a major retrospective of his work in 1993.

The Mike Kelley: 1985-1996 exhibition was conceived as a retrospective and presented the most significant elements of Mike Kelley's artistic production up to the year 1996. Over a hundred works were displayed, on loan from public and private collections from both Europe and the United States, including paintings, sculptures, installations, photographs, aquarelles, architectural mock-ups, videos and other pieces.

Considered a multidisciplinary artist from his beginnings, in the late seventies Mike Kelley became interested in the critical analysis of certain of the religious, psychological and economic conventions on which Western civilization is based. The artist examines popular culture, its symbols, milestones and seduction mechanisms, to find subjects and materials with which to develop a syncretic discourse where concepts like psychoanalysis, the history of visual culture and the communications media converge. In his extrovert works, the triviality of human existence in the contemporary world and the typical banality of everyday life are converted into formal, grotesque, almost surrealistic structures, in which sarcasm always has a presence.

Kelley became known in Europe thanks to his installation Craft Morphology Flow Chart, from 1991, which the artist considered the synthesis of this aspect of his investigations into the domestic negotiations of feelings. The work of more recent years, which Kelley entitles "Missing Time", also plays a special part in the exhibition. The artist's collaboration with other creators such as Tony Oursler, Paul McCarthy, and Bruce and Norman Yonemoto also received special attention in this retrospective, as did a compilation of his musical activity with different authors from the California avant-garde scene.

A novelty in the exhibition was presentation of the version that the artist made especially for the MACBA of the complex 1985 installation Plato's Cave, Rothko's Chapel, Lincoln's Profile. The work centred on possession and the need to give things names and was inspired in one of the performances Kelley made in the early eighties in the form of a rock concert, with the aid of the world-famous rock band Sonic Youth

Our presentation of this exhibition, which visitors were forced to enter dragging themselves along the floor in order to pass under the low opening of the entrance way includes, on the one hand, an extract of text from the exhibition catalogue which contextualises the work within the rest of Kelley's career and, on the other, a recreation (both visual and in sound) of the route followed by visitors through "Plato's Cave".

You can explore the recreation of the installation here.

OPEN THE DOOR AND LET IT IN
Elisabeth Sussman

Much of Kelley's early work was performance-based. Each performance revolved around a putative theme. Kelley's ornate, abrasive language shaped a loosely structured narrative that he would decry in performance. Not simply readings, Kelley's performance involved the manipulation of props, objects he made that related to the theme of the work. What was often missing was music. However, Kelley was also, during his Cal Arts years, a member of a band called The Poetics. Other members of the group were fellow students Tony Oursler, Don Krieger, Mitchell Syrop and John Miller. The Poetics were firmly in the camp of art-rock. In the beginning, the band tried to be off the cuff and fun and used props and language humorously, somewhat as Kelley did in his performances. Self-conscious and quotational about rock theatrics, The Poetics was a rock performance group. Eventually, the act became purely musical.

Kelley's cult status as a performance artist was paralleled by his growing fame as an artist who produced work that could be shown in galleries, but the latter —mainly drawings and objects-issued from their relationship to the theme of a performance and often a gallery show had the same title as a performance. His activity in the band diminished. But the self-conscious attitudinizing of rock theatrics remained an occasional trademark of his performance work.

The first major work where all the strands of Kelley's early interests unite was Plato's Cave, Rothko's Chapel, Lincoln's Profile. This work culminated in 1986. An elaborate and exfoliating set of relationships forms the substructure of this piece which is given order by a nonsensical notion, Kelley built a story around three apparently unrelated historical figures. What unites them in Kelley's conception is that each has a specific noun associated, possessively, with his name. Kelley then created texts, images, banners, an installation and a performance in which to tree-associate around those possessives, so that chapels, caves, and profiles become linked in a seemingly arbitrary way.

The anarchism of this work is in marked opposition to the seriousness of its core subject: philosophy, art and history. Kelley's scathing attack on these profound subjects comes through most clearly in the performative aspects of the work. These occur in the installation and in the performance. At the installation, the viewer is converted to a punk performer by being forced into a position that rudely demeans the subjects of the work. Kelley orchestrates this conversion in the following way: the heart of the installation is an enclosed cavechapel structure hung with banners and lit by a cheap, glowing, fake fireplace. To enter this space, the viewer must "perform." The only way to get inside is to crawl, to get down on one's belly and slither on the floor through a narrow space below a painting. The painting bears a text that addresses the spectator as a worm (the lowest order of life that can exist in a cave) and as a spelunker, an explorer of caves. Crawling in and out of this "holy" enclosure debunks any dignity out of the attendance at such shrines, trashing the metaphysics and poetics of patriotism, art appreciation and philosophical speculation.

Plato's Cave, Rothko's Chapel, Lincoln's Profile culminated in 1986 in a performance at Artist's Space in New York. Here Kelley employed the theatrics of rock as appropriate backdrop for the attack on the megalomania of his subject —the social veneration of history, art, patriotism. He adopted the persona of a rock star to spew out the nasty words of his text. As he called out the names of the states —Arkansas, Florida, Louisiana, etc.— where caves exist, his tirade was punctuated by slamming, banging sounds and by a wall of guitar sound produced by the band, Sonic Youth, concealed behind a curtain on the stage. Riffing wherever word associations would take him, Kelley did a rant on sexual liberation that he linked to freedom (Lincoln freed the slaves), proclaiming that he too was free..., free to play with dolls, free to be himself, (his body was his self), to take his pants off. This whole action is again punctuated by the noise of rock guitars. Kelley's performance erased the piety of the subject matter, taking the most simplified rock structure —noise— and driving it over the top with verbal harangue that exaggerates and amplifies the rock lyric. 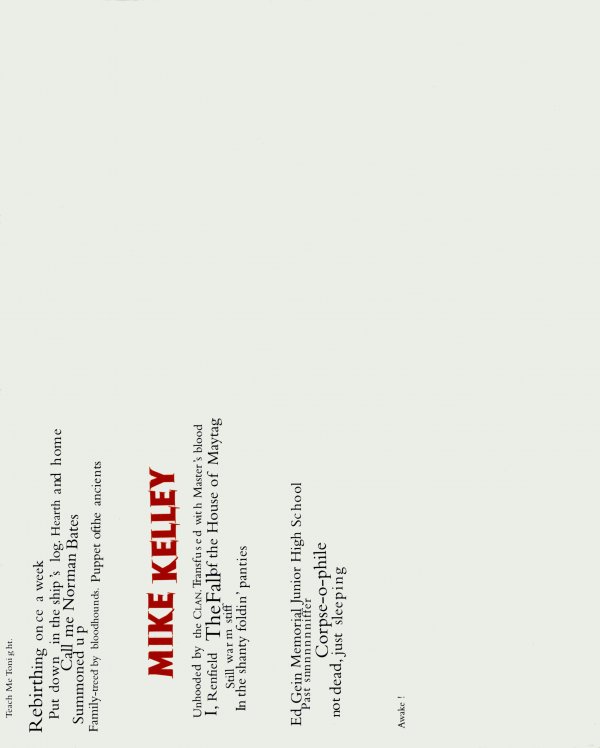