‘Comedy depends on a rupture with the rational order, it dislocates perspectives and juxtaposes separate actions as if they belong to one another. The sensation disorients, creates patterns of random mosaics and disturbing layers. Nonsense has a power to deconstruct.’ Melanie Smith

Melanie Smith (b. 1965) was born in the U.K. but established her career in the Mexican art scene of the 1990s. Smith moved from the political and economic tensions of Thatcher’s Britain to Mexico in 1989, where she witnessed the impact of capitalist modernisation, neo-liberal globalisation and hyper-consumerism, the development of an informal economy alongside traditional forms of manufacture, and the ongoing failures or collapse of modernity. The two contexts, Mexico, or more broadly Latin America, and Britain, or a wider Anglo-Saxon or Eurocentric culture, are central to her work. Smith’s work embraces a range of media but informs them in unique ways with a persistent reference to painting; nevertheless, she does not describe herself as a painter. This exhibition takes its name from one of Smith’s earlier works, an installation incorporating multiple paintings stacked in front of one another. In her work there is a continuing play between farce (implying absurdity, mockery or travesty) and artifice (meaning both artificiality and deception, and, ultimately, the ‘artifice of reason’), and she applies these concepts to contemporary society and what has been termed ‘baroque modernity’. This exhibition surveys Smith’s work from the early 1990s until today. Rather than follow a chronological arrangement, it is organised according to a series of deceptively simple themes or motifs that recur in her work: Abstraction, Urban, Colour, Body, Archaeology, Nature and Scale. This allows works from different moments in Smith’s career to be brought into juxtaposition, showing the continuities and yet also embracing tensions, conflicts, irrationality and chaos. She has described her body of work as a ‘giant palimpsest’.

ABSTRACTION
Instances of abstraction recur in Smith’s work, from the ‘found’ abstractions of the bright, synthetic colours of the tarpaulins and plastic goods of Mexico City’s street-markets, to the early twentieth-century utopian modernism of Russian artist Kazimir Malevich (1879–1935). In her work, abstraction becomes a way to speak about the failures of both modernist aesthetics and modernity itself, particularly through the political ideologies attached to the nation state, as they have been applied and experienced especially in Latin America. Any notion of geometric or chromatic purity is undermined by the aesthetic, economic and political contaminations of the urban metropolis, the operations of global capital and the symbolic disorder of a group of high school students chaotically holding aloft Malevich’s Red Square (1915) – the original title was Painterly Realism of a Peasant Woman in Two Dimensions – that collapses and disintegrates in Smith’s Aztec Stadium: Malleable Deed (2010).

URBAN
Smith explores the megalopolis of Mexico City, a municipality of more than 20 million inhabitants, at micro and macro levels. Picturing it from above, in the series Spiral City (2002–04), she merges the seemingly never-ending urban expansion with the aesthetics of the modernist grid. At ground level, she tracks the found abstractions of street markets or tianguis in the name derived from the Aztec language nahuatl. Such markets exemplify both local informal economies and the impact on the Mexican economy of kitsch globalised goods mass produced in China. Ancient and modern coexist in Smith’s metropolis, along with the popular and folkloric – part of a repertoire of imagery deployed for nationalistic ends by the party of the revolution (PRI) to create a Mexican imaginary, or Mexicanidad, which Smith explores in her film Aztec Stadium: Malleable Deed. She has described her practice as being like a ‘palimpsest’ in which layering and clashing meanings give way to a critical examination of modernity.

COLOUR
Though her work Smith advances an environmental or phenomenological experience of colour; colour that is heightened, intensely synthetic or chemical. Thus although she takes inspiration from early twentieth-century avant-garde modernism and from mid-century movements such as Minimalism, she undermines the theoretical purity of their aesthetics. So, like abstraction, colour in Smith’s work is contaminated or kitsch, artificial or absurd, or else saturated and overpowering, as if mirroring the experience of certain Latin American urban contexts. In Bulto (2011), a bundle that looks like an archaeological artefact found in Peru, except that it is a startlingly bright pink, is depicted being transported around the city of Lima, in a variety of vehicles and situations. It is in fact a modern, synthetic fardo funerario (a funerary bundle containing mummified remains) where, says Smith, the body takes on ‘a phantasmagoric state of unresolved identity.’ It appears as a bizarre or inexplicable object in perpetual circulation.

BODY
Following ideas drawn from the theory of carnival, espoused by Russian theorist Mikhail Bakhtin (1895–1975), but also embraced by the British ‘surreal’ comedy group Monty Python (founded 1969), Smith advances a view of the body as absurd and grotesque. Bakhtin was writing in the 1930s, under a totalitarian regime, but found a way to comment on and critique it in a clandestine manner from the perspective of absurdist aesthetics and the levelling of hierarchy and official power structures embodied in carnival liberation. That Smith transplants this discourse to Mexico enables her to parody the corruptions of neo-liberal government, through a scene of hell drawn from The Garden of Earthly Delights (1490–1500) by Hieronymus Bosch (c. 1450–1516), part of a series of tableaux she has drawn from Bosch and Pieter Breughel (1525–1569). Such images of the body, and their absurd, fleshy reality, also recur in other works, including Smith’s new film María Elena (2018).

NATURE
The natural environment appears in Smith’s work as a foil to the urban context, the Brazilian Amazon and Mexican rainforest present overwhelming contrasts in scale similar to those of Mexico City. In Xilitla: Dismantled 1 (2010), the Surrealist collector Edward James’s garden provides a lush, tropical backdrop for the concrete modernist follies that appear like twentieth-century counterparts to ‘lost’ Mayan ruins. Natural environment overtakes industrial modernity in Fordlandia (2014), a filmic essay on entropy in which the Amazon rainforest gradually reclaims Henry Ford’s eponymous model community. By contrast, in Smith’s latest work, María Elena, the setting is the desert, with nature as an inscrutable presence represented by llamas and owls that bear witness to the operations and contaminations of capitalism within the Latin American landscape. Colonialism, industrial modernity and environmental degradation in the era of globalisation are therefore linked through these meditative films and their accompanying series of paintings.

ARCHAEOLOGY
Smith's work presents an archaeology of modernity and of the histories of imperial and economic colonialism, from the perspective of the present moment. The fragment plays a key role in this, whether it is the fragmentation of bodies in a Bosch-inspired installation or painting, in a film made in the Amazon or even a Chilean nitrate-producing town. Alternatively, it is an inexplicable fragment as in the installation Irreversible/Illegible/Unstable (2012), which takes the form of a museum workshop, except that the illogical ‘artefacts’ are made of plastic and are fragments of nothing in particular. Elsewhere in her work, the archaeological arises in filmic essays on entropy and the ruins of modernism or the semi-petrified remains of colonial industrialisation, in the tropical settings of Mexico (Xilitla: Dismantled 1), Brazil (Fordlandia) or else the dry region of Chile’s Atacama Desert (María Elena).

SCALE
Natural and urban contexts both provide Smith with the opportunity to play with extremes of scale and perception. In diverse works, she shifts from nearpanoramic ‘macro’ views of Mexico City, the Mexican rainforest, the Atacama desert or the Amazon, to the micro-examination of street markets, concrete follies, rusting machinery, or flora and fauna, such as a mosquito on someone’s fleshy skin. Beginning with Spiral City, where the scale of Mexico City provokes an inability to focus, its endless grid an equivalent to fragmented pixels, these dramatic shifts disturb perception. Similarly, the mirrors carried by workmen through collector Edward James’s surrealist garden at Xilitla produce disjuncture, displacement or misalignment – a reference also to the American artist Robert Smithson (1938–1973) and his Yucatan Mirror Displacements (1969). Fantastic or absurd shifts in scale likewise play a part in the inversions found within the paintings of Hieronymus Bosch and Smith’s installation Fake and Farce (2017–18) that presents a tableau around a giant ear. 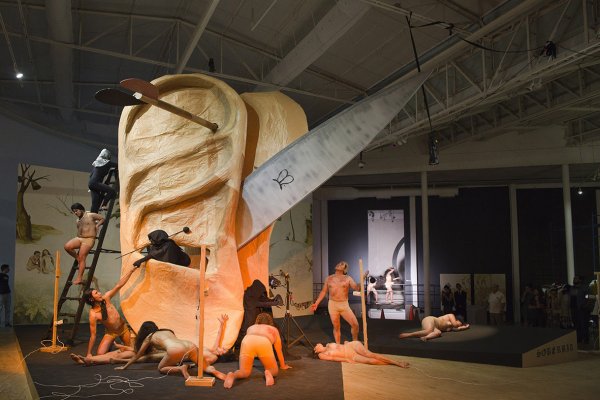 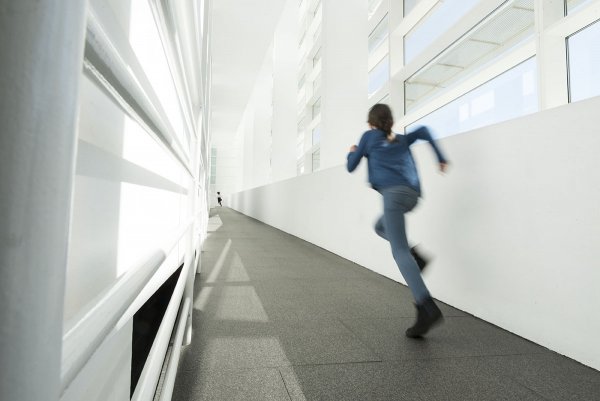