This exhibition of works from the Collection was organised into three distinct chronological periods. The first section focused on art produced between the forties and the late sixties, when visuality was the dominant paradigm of the artistic experience. Works by Alexander Calder, Ángel Ferrant, Hans Hofmann and Paul Klee offered an introduction to subsequent informalist pieces by Jean Dubuffet, Lucio Fontana and Antoni Tàpies, and to constructivist works by Jorge Oteiza and Pablo Palazuelo.

The second section, which focused on the seventies, zeroed in on the emergence of art as idea and process. Here, pure visuality made way for narrative, action, debate and information. This section included pieces by the Catalan conceptualists – Grup de Treball, Francesc Abad, Fina Miralles, Muntadas and Francesc Torres – alongside works by some of their international contemporaries: Piero Manzoni, Mario Merz and Robert Rauschenberg.

The eighties and nineties were the focus of the third core area. In the nineties, the media explosion that had emerged around painting and figures like Miquel Barceló, A. R. Penck, Ferran García Sevilla and Zush in the eighties, gave way to a blurring of the boundaries between artistic disciplines and media, and the fusion between so-called high and low culture. It was also a period of consolidation of the use of new technologies in the formalisation of artistic discourse. The exhibition included works by Pep Agut, Jordi Colomer, Juan Muñoz, Carlos Pazos and Rosemarie Trockel, among others.

This exhibition replicated the structure used on previous occasions, dividing the Collection into three different chronological periods. The 1940s to the late 1960s was the first period covered, in which visuality was the predominant paradigm on which the knowledge of art was based. Representing this period were a number of historical works by Alexander Calder, Paul Klee, Leandre Cristòfol, Àngel Ferrant and Hans Hofmann, several Informalist investigative pieces by Antoni Tàpies, Lucio Fontana and Jean Dubuffet, and finally some Constructivist works by Jorge Oteiza and Pablo Palazuelo.

Focussing on the 1970s, the second period corresponded to the advent of art as an idea or work in progress, when pure visuality was replaced by narrative and activity. Debate and information were the key elements around which artistic creation was structured. It was exemplified by works by Catalan conceptual artists like “Grup de Treball” members Muntadas, Francesc Abad, Fina Miralles, Francesc Torres and others, which were placed in an international context with works by Piero Manzoni, Robert Rauschenberg and Mario Merz, who represented new approaches to art and its forms of expression.

The 1980s and 1990s were the third period, characterised by the huge media explosion represented by Miquel Barceló, A. R. Penck, Ferran Garcia Sevilla and Zush in the 1980s and the blurring of boundaries between techniques, disciplines and so-called “high” and “low” culture, all of which were features of the 1990s. Moreover, it was the period when the use of new technologies in the formalisation of artistic discourse was consolidated. Works by Jordi Colomer, Pep Agut, Carlos Pazos, Juan Muñoz, Rosemarie Trockel and others were presented. 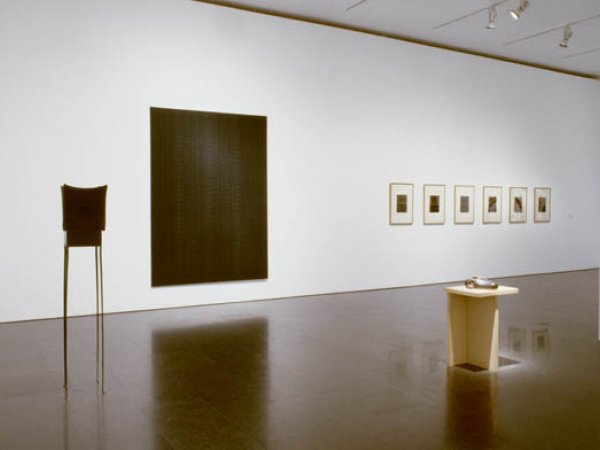