Rather than presenting itself as a standard retrospective, Lothar Baumgarten. Autofocus Retina offered an overview of the conceptual principles that shaped the artist's career, with works spanning from the late seventies to the present.

The history of ethnocentrism, modern anthropology and the questioning of Western systems of thought and representation are some of the recurring themes in the work of Lothar Baumgarten (Rheinberg, 1944). The artist expresses these concerns by means of photography, language, modern graphics (through colour, geometry and typography) and research into the architectural specificities of the places that house his works.

As well as photographic series such as Montaigne (1985) and Carbon (1989), the exhibition presented the specific installations Imago Mundi (L'autre et L'ailleurs) (1988), in the façade and tower of the Museum, and Ecce homo (2002) at the Capella MACBA. The artist worked in collaboration with the designer Walter Nikkels on a catalogue to accompany the exhibition, which functioned as a space for creation and reflection on his work, with an exclusive selection of essays and images.

This monographic exhibition by Lothar Baumgarten (who lives and works in Berlin and New York) brings together a series of photographic works, with single images as well as sequences forming part of this complex presentation. While not considering itself to be a retrospective, the show includes sculpture, projection, wall drawings, books and film from the late 1960s to the present day—some of which is adapted in situ to the architectural conditions of the MACBA.

Autofocus retina is the name of this presentation, but it is also the title of a configuration consisting of four diamonds shaped mirrors connoting the inner mechanics of a camera lens, its photographic eye. As we know, without the forming frame format, each photograph would be circular. Chromatic and geometric compositions are set within the more singular places in the museum, where architectural space is understood as if it were a blank page. Imago Mundi (L'autre et L'ailleurs), (1988, 2008), a piece which transforms the museum's glass facade into a prism and explores the pretension of photographic language to establish itself as a universal truth. Reflected and mirrored as a sundial on the museum interior, it is based on and reflects the Kodak printed-matter colour-separation chart Print your own colour patches. This two-dimensional printing formula is transformed into a three-dimensional space in which a "world map" is painted in situ in the architectural reality of the "tower". It displays the names of all seven continents, except Europe, which is represented by its former main colonial powers. Cyan / yellow / magenta / black signify the colours of the world's population in its ethnic diversity. All space-related windows and the glass facade of the building are occupied by the colour chart, while black provides the surface of the space itself. As in photographic technology, the material employed in this work is both natural and artificial light.

The structuralist, comparative analysis of Claude Lévi- Strauss, for example, aroused Baumgarten's interest in ethnography, one of whose methodological principles is the opposition between nature and culture. His interest in this subject is reflected in his early achievements and his ephemeral work, which shun the objectual aspect and were jointly photographed under the title Culture-Nature [Manipulated Reality] (1968–72). And also in the projection piece I prefer it there better than in Westphalia, Eldorado (1968–76), plus the 16 mm film Der Ursprung der Nacht [Amazonas-Kosmos] 1973–77 (1978). When photographing the first "images" of his ephemeral sculptures, his sense of awareness was guided by the eye of William Henry Fox Talbot and the still-life compositions of Pittura metafisica. These ephemeral interventions open the way to a work that seeks to analyse the value of those sculptural works within the grammars of knowledge and production. In that sense the images of the projection piece Unsettled Objects (1968–69) reflect the consequences of the classification and presentation systems employed by ethnography or natural science museums. Through his work, Baumgarten has explored the relationships that individuals and communities maintain with territory and with certain places in particular.

From 1978 to 1980 he chose to live among the Yãnomãni in the Venezuelan Amazon, and since then his work has focused even more on how Western thinking and consciousness have represented the perception of "the Other", its setting and its language. "Can one reflect one's own cultural context without trying to understand another culture from within, one which is not warped by our standards?" Baumgarten asks. The word is thus positioned as an element of contrast and balance between different ways of understanding the relationship between individuals and their surroundings. For Baumgarten the remnants of those non-writing societies that knew how to maintain non-predatory forms of balance and were able to constitute and transmit culture are preserved through language. Alongside the capacity of the word, Baumgarten exhibits the boundaries of photography as an example of the limitations of technical systems of comprehension.

Baumgarten is the author of an important photographic oeuvre and this exhibition displays two extended series of single and combined photographs —Carbon (1989) and Montaigne (1977–85)— together with three projection pieces: Unsettled Objects (1968–69), Ecce Homo (2002), and Fragment Brazil (1977–2005). In Carbon Baumgarten's investigation is based on the description of the continent's widespread railway system and its decrepit industrial infrastructure (which is often a masterpiece of engineering) implanted in vernacular locations within an ever-changing traffic and trading area. Carbon visualizes the complex and hybrid North-American landscape and the pragmatism of its use by industrial society today. All the images were composed and photographed with a book in mind. To varying degrees, some of them are fragments and others a closed world in themselves which function like a counterpoint, as in music. They appear as changing motifs and subjects beyond linear classification. Sequential qualities complete themselves via the juxtaposed image, as one page after another within the context of a book, or appear as a canon, framed side by side on a wall within a space in which momentum is set within a given architectural condition. They are transformed into social diagrams undergoing constant change, like "nameless" locations.

The presentation of the gelatin-silver prints of Carbon is combined with three out of sixteen typographical wall drawings, set in the typeface Franklin Gothic, which combine the names of North-American railroad companies. In their graphic configurations they reflect the engineering structures of bridges, tracks and semaphores. Six vitrines are displayed with drawings and layout materials from the book Carbon and give an inside view of its production. The concept and typography of this masterpiece were created with the collaboration of Walter Nikkels.

Montaigne, Terra Incognita (1977–85) is named after Michel Eyquem de Montaigne. Once again, Baumgarten associates the objectivity of the photograph with its impossibility to transmit essential sensations in the comprehension of an event. Single photographs go to form triptychs or five-part compositions, thus constructing the content of each particular piece. Words or names and colour bars appear on the mats of the prints, giving a whiff of time and the aroma of the place.

The search for Eldorado was carried out in the world's oldest geological formation, the "Guyana Shield", La Gran Sabana, and the landscape of Makunaíma and the Tëpitón, the mesas above the vast rainforest forming the watershed between Venezuela, British Guyana and Brazil, the land of the indigenous peoples of the Taurepan, Arekuna, Ingariko, Karina and Kamarakoto, speakers of the Pemon tongue. Polluted by thousands of tons of mercury through gold strip-mining, the virgin forest is turned upside-down and a new paradise of goods and desires which no longer grow on trees is established.

Erosion, deserted land, depression, hunger and intoxication have become the new harvest. The series moves the problems of photography forward and confronts the artist's position with the objectivist traditions that dominate the current panorama of the medium. Truth, for the artist, is not the adaptation of an idea to the reality of an object, but rather the involvement of the subject who knows.

Termite Savanna (1969) is an ephemeral sculpture that makes the process of time manifest and visible through its materialisation. It is in constant change. It features horizons cut into wooden planks, pigments, light bulbs, cables and exercise books with drawings under pigeon feathers form the body of a landscape, that of La Gran Sabana. This piece was created long before Baumgarten worked in South America.

Fragment Brazil is a multi-projection piece that combines six projections with a total of 480 images, which change at different intervals. It consists of details of Brazilian birds, painted by Albert Eckhout in 1654 and Yãnomãni drawings made in 1978–80.

In the Capella dels Àngels Ecce Homo (2002) combines geometric and chromatic elements with projected images. It reflects on Walter Benjamin's Passagen Werk. The photographic survey took place in the medieval Tuscan towns of Montalcino and San Giminiano and the landscape of Crete. There are two synchronised projections, each consisting of 162 black-andwhite slides of photographs made in 2002 and a single piece consisting of 81 circular images of clouds, plus several permanent, individual projected images, related to selected architectural elements in the Capella dels Àngels: colour field charts painted on aluminium disc sets, combined with circular mirrors.

In eight different colour compositions they each signify the colour cosmos of masters from Gothic end Italian Renaissance: Pinturicchio, Masaccio, Giotto de Bondone, Fra Angelico, Luca Signorelli, Piero della Francesca, Domenico Ghirlandaio and Paolo Uccello. For Baumgarten, the presentation of a work is what creates the essential basis for an involvement that finally communicates the feelings aroused by the original sensations, thereby achieving a momentum. And the place of presentation is precisely what enables the artist to investigate the non-visual elements of art. The exhibition is, in fact, a notation in images, not unlike a musical score.

A conversation between Lothar Baumgarten and Kaira Cabañas
Lectures 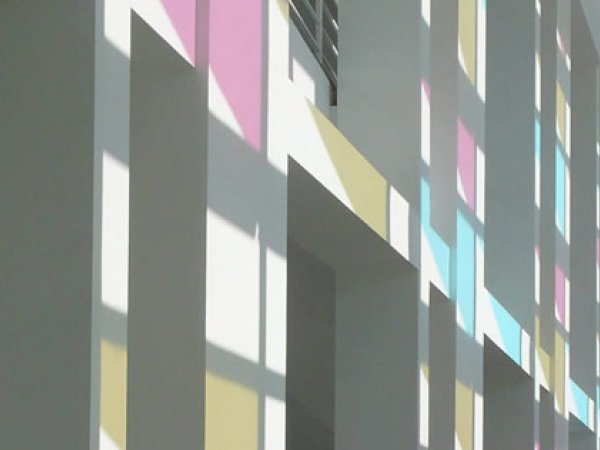 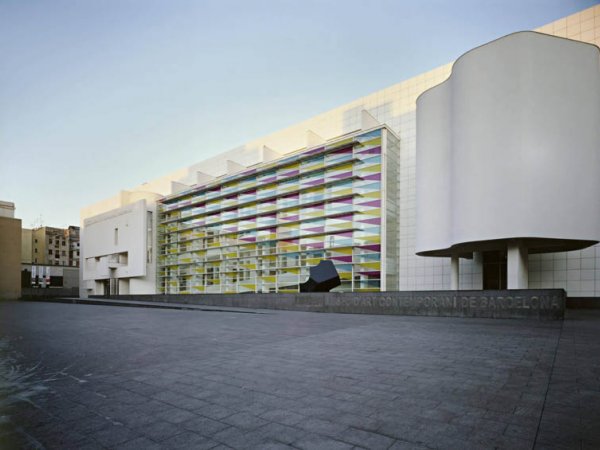 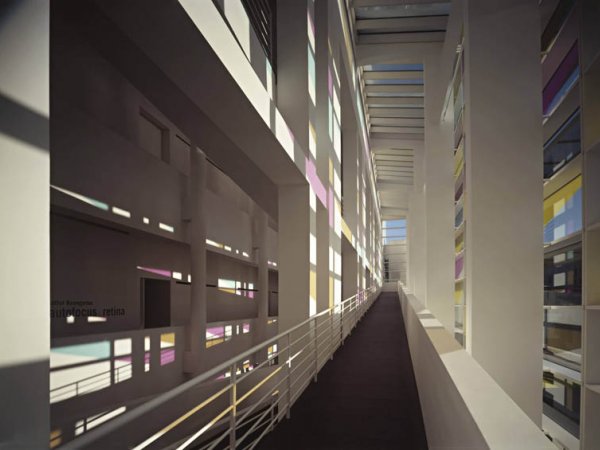 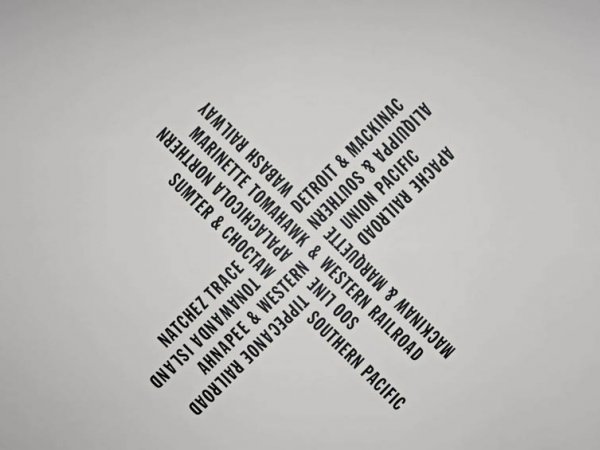 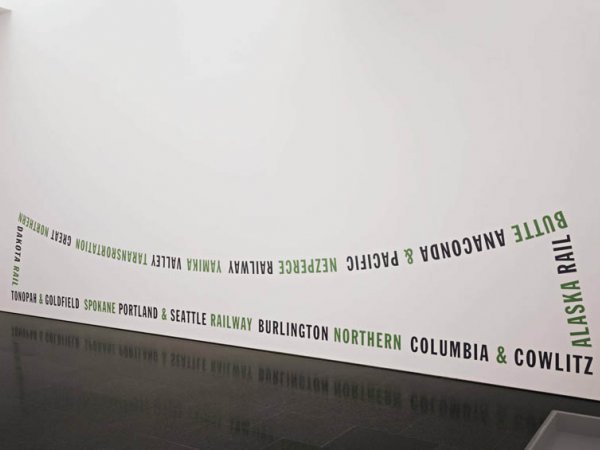 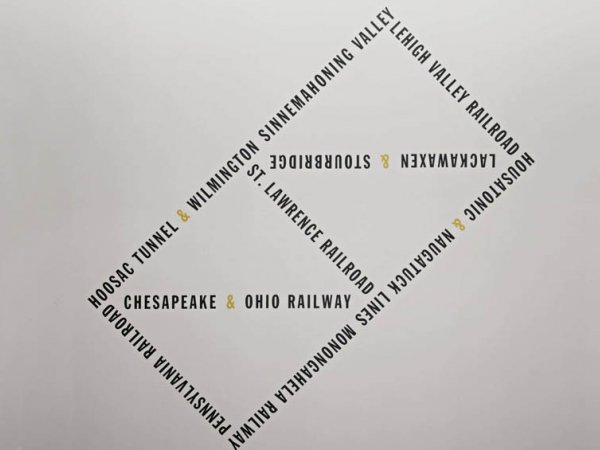 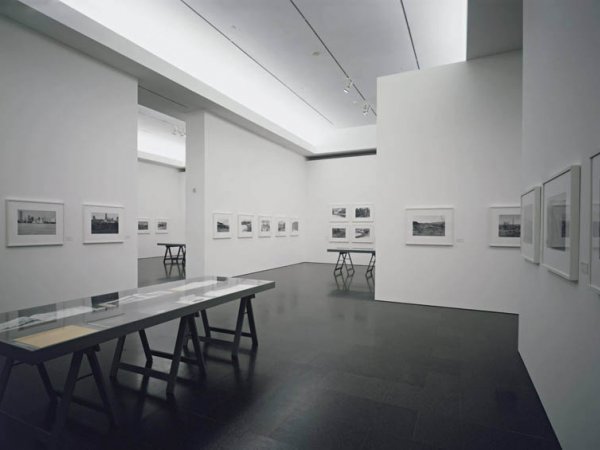 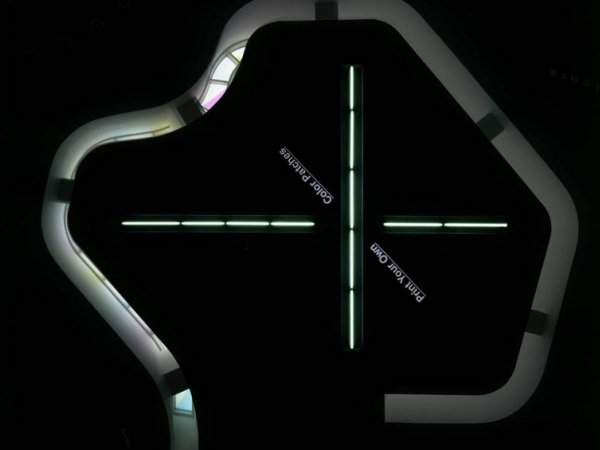 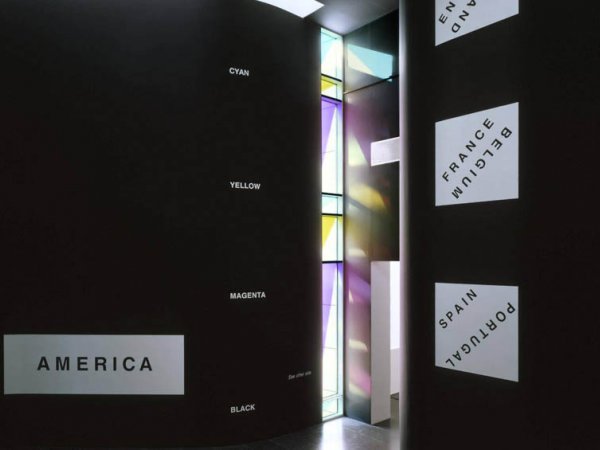 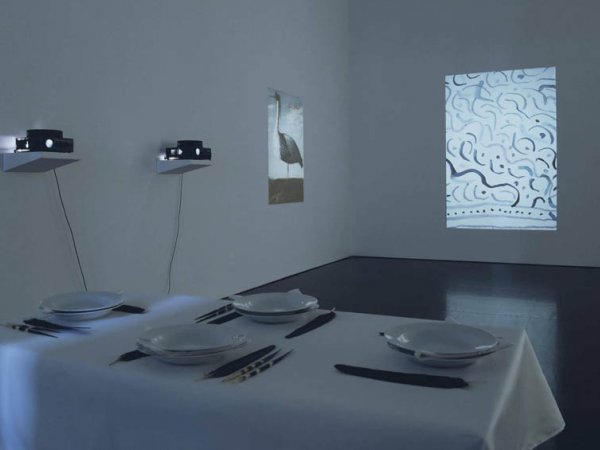 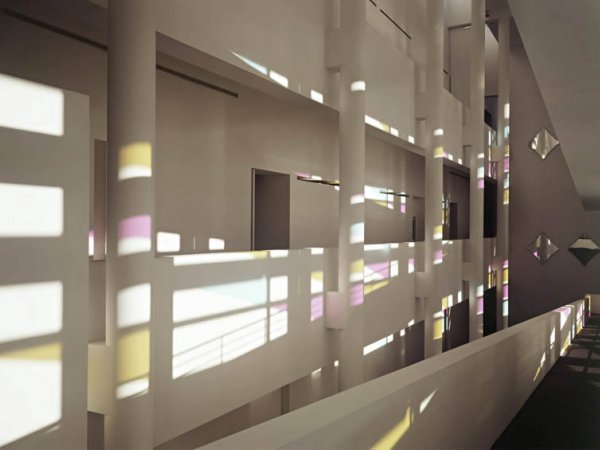 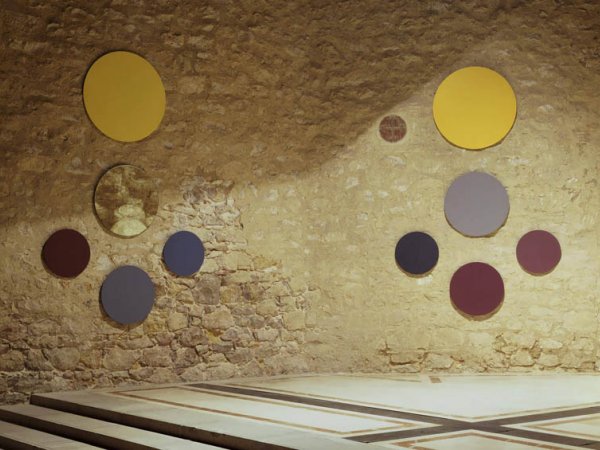 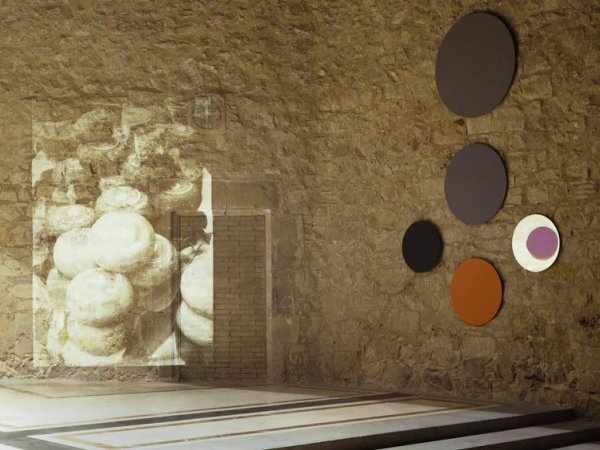 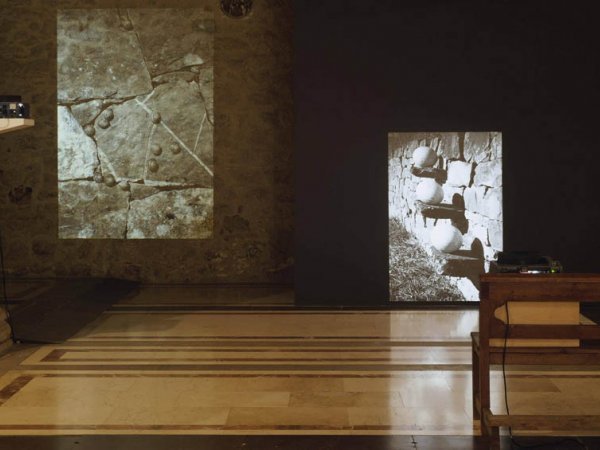 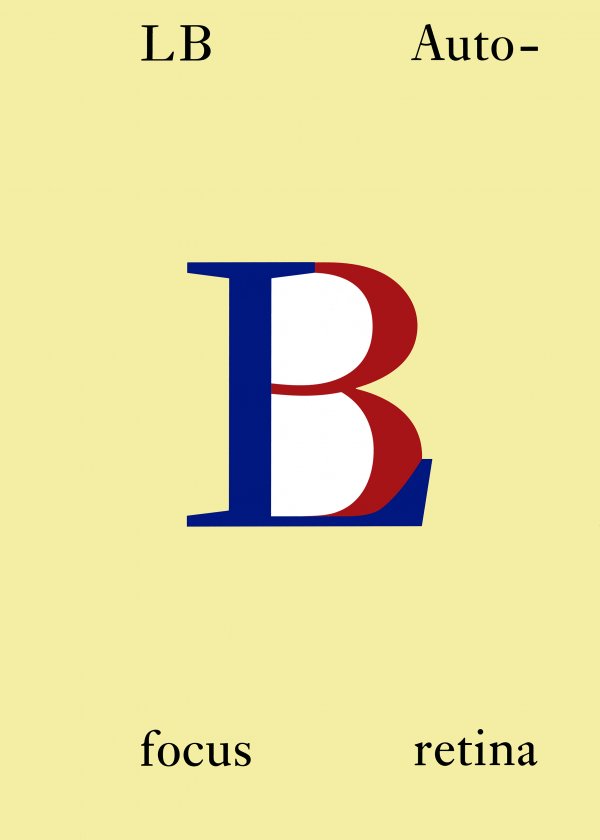 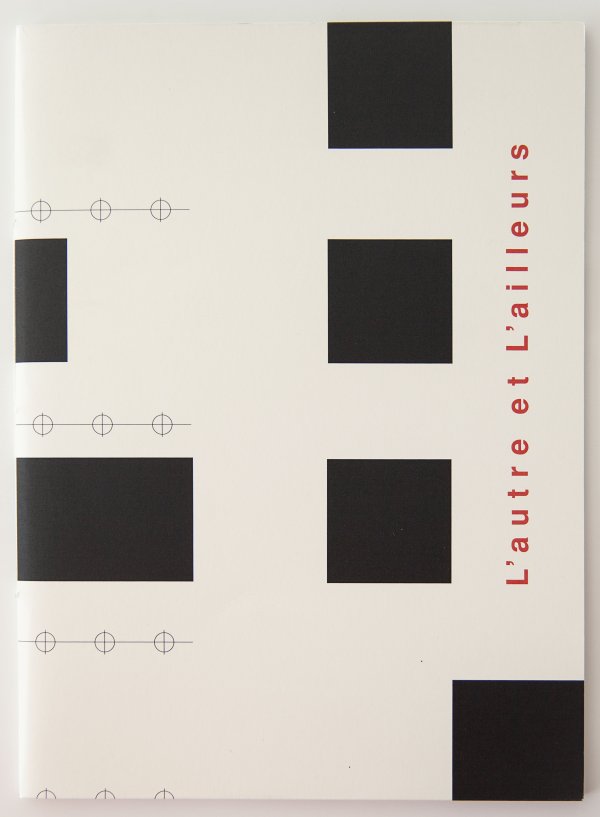