Artists began making their first forays into television around 1969, when portable video equipment started to become available. For many artists, video offered an instrument of rebellion against mainstream television programming. It was beginning to seem as though television was exerting an excessive and harmful influence on society, and artists started to examine its effects on audiences who had come to see their TV sets as simply another piece of furniture in their homes, and also as a direct source of cultural information.

For other artists, TV was a medium that offered an escape route from the institutionalised art world. Video was part of a broader trend that challenged the traditional artistic object through non-tradable forms of art such as performance, conceptual art, Land Art and Body Art.

The exhibition is curated by American filmmaker Michael Shamberg. Since the seventies, Shamberg has been working with video artists in the context of the art institution, as well as in television and cinema. From 1975 to 1977, he organized video screenings at The Kitchen in New York, one of the most influential interdisciplinary laboratories for contemporary art. He produced videos and video installations by artists such as Vito Acconci, Dan Graham, Nancy Holt, Lawrence Weiner and Robert Wilson. In the eighties, Shamberg started making music videos for New Order and other bands, bringing in artists such as Kathryn Bigelow, Robert Frank, Robert Longo, Chris Marker and William Wegman as directors. He invited John Baldessari, Barbara Kruger and Lawrence Weiner to create the posters for New Order events. In 1988, Shamberg co-produced Beth B’s feature film Salvation!

In relation to the exhibition “Home Screen Home”, John Baldessari realizes a special project: “4 RMS W VU: wallpaper, lamps and plants, NEW”. The project is a collage of wallpaper designed by Baldessari in combination with black-and-white photographs of lamps and flowerpots. The installation refers to domestic space as the setting for watching television.

Made for the TV screen

Recent discussions about art and the Internet revolve around the challenge the Net poses to the conventional exhibition system. In the sphere of the Internet, art abandons the physical space of the institution as the site of experience in favor of direct access through the private terminal.

The discussion about the Internet is very similar to the issues raised by the first artists working with video. Their concerns were equally related to finding an alternative space for presenting art. Through television, art was to be brought directly into the home.

Artists’ access to television began around 1969, when the first portable video equipment became available. For many artists, video represented a tool for revolt against mainstream television. Television was perceived as having a tremendous influence on society, and artists examined its effects on a public that had grown to know television as both a home furnishing and a direct source of cultural information. For others, it was a medium through which their art could escape the institutionalized art world.

In her essay “The Suburban Home Companion” Lynn Spigel analyzes television’s theatricalization of the home. In the forties and fifties, American home magazines advised that “conventional living room groupings need to be slightly altered because televiewers look in the same direction and not at each other” or that “television is a theater; and to succeed, theater requires a comfortably placed audience with clear view of the stage.”

Television puts the viewer in an isolated position, looking at a public spectacle from his own home. It makes the viewer feel as if she is taking part in a public event “from a distance.” At the same time, this distance makes outside spaces part of a safe and predictable experience. People are allowed to travel from their homes while remaining untouched by the actual social contexts to which they have imaginatively ventured.

Television thus contributed to the constitution of the ideal of the suburban family. Television programs also reinforced the family structure. Popular sitcoms pictured romanticized versions of family bonding; even the news was generally presented by a couple. As Dan Graham observed: “Television might be metaphorically visualized as a mirror in which the viewing family sees an idealized, ideologically distorted reflection of themselves.”

Artists were among the first to oppose television as an instrument of power. They employed video as a weapon against television’s representational hegemony. In the sixties, underground groups such as Videofreex, People’s Video Theater and Raindance Corporation provided program alternatives to mainstream television and explored the democratic possibilities of mass media. They documented street life in a direct, real-time and unedited style, modeled after the French “cinéma-vérité”. The 1971 manifesto of the alternative movement, “Guerrilla Television,” outlined a plan to decentralize television so that the medium could be made by as well as for the people. Through public-access channels, they covered political conventions from a deliberately subjective position, challenging the objectivity of commercial television journalism.

At the same time, other artists, such as Vito Acconci, John Baldessari, Joan Jonas, Nancy Holt and Richard Serra added video to their repertoire of media, not with intentions of changing television and directly affecting social change, but with an interest in changing the standard relationship between artist and viewer. An example is Richard Serra’s video Television Delivers People (1973). The opening statement, “The product of television, commercial television, is the audience,” subverts the common notion that we control the role of television in our lives. These artists were interested in redefining the rigid criteria of the commercial art world. Video’s impermanence and reproducibility were seen as a denial of art as precious object. Video thus was part of a more general questioning of the traditional art object through non-marketable art forms such as performance, conceptual art, land art and body art.

Since the eighties, artists have been less preoccupied with seeking adversarial positions inside the communications industries. Their positions even seem to have been reversed. Many of the early revolutionaries have become official television producers, contributing to popular series like Hill Street Blues, movies and documentaries, supported by public channels such as Channel 4, BRTF, ZDF, VPRO and DD. Artists are actually hired as creative directors for MTV clips and commercials. However, through strategies of appropriation, parody or pastiche, these works still create a difference, subverting mainstream imagery at a moment when television has become so common it sometimes seems like wallpaper.

American artist John Baldessari (1931) has been very conscious of the effects of mass media on the spectator. In his photo work, he comments on the imagery of Hollywood movies, television, advertisements and photojournalism. His major tool is the principle of montage. Montage, as it was used by the avant-gardes of the early twentieth century, for example, in the films of Sergey Eisenstein or the photo-montages of John Heartfield, strove for a clash of images. The aim of montage was to break the naturalism of the continuous filmstrip by replacing it with a disconnected assemblage of images.

Mass media, however, would recuperate the very techniques of the avant-garde. By now the clash of images has become a common, everyday experience. As American critic John Miller observed in his essay on Baldessari, if the umbrella and the sewing machine once met by chance on Lautréamont’s surrealistic dissecting table, in advertisement that encounter has now become routine. The newspaper and television present ads, natural disasters and political events all on the same footing; because they have to compete with one another for attention, these otherwise dissociated items become comparably trivial. Both media have an effect that is characteristic of capitalist society.

At a time when reading through a series of images has become so normal to mass media spectators that it seems to be a reflex response, Baldessari makes us stand still before the mechanisms of montage. In order to do this, he subjects the technique of montage to an ironic reversal. Instead of consciously arranging images according to a meaningful juxtaposition; he uses a kind of non-signifying montage, for example by shooting television movies at random with an intervalometer. By using the camera as an analytical tool that stops action, Baldessari reveals the latent, not-manifest, meaning of mass media imagery. 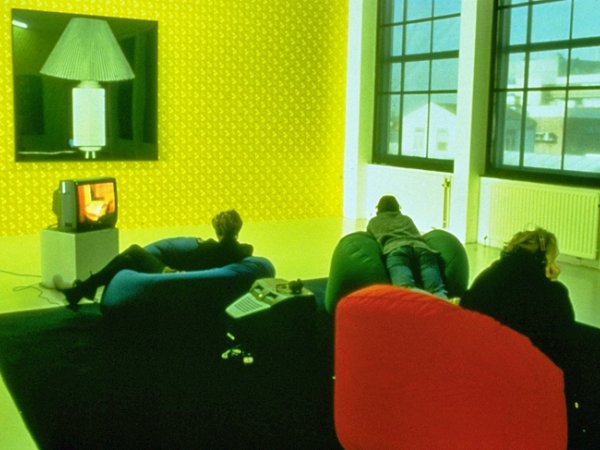 Exhibition view
The essence of the fragment and the module resonates deeply in my work.
Pep Agut