George Brecht (New York, 1926 – Cologne, 2008) did not like to refer to himself as a sculptor or a painter. He considered himself more of an “enabler of events”. In his event-scores, chance organises the space and time of the artwork and the spectator is invited to take on the role of performing them, in a process that contributes to redefining the traditional roles of authorship. Objects from everyday life were the main raw material for Brecht’s works. The artist’s mediation endows chairs, bottles, coat racks, sheets, dice, note pads and cigarette packets with unexpected aesthetic dimensions that lead us to rethink the institutionally accepted systems of exhibiting and commercialising art.

Drawing inspiration from the practices of Marcel Duchamp, the teachings of John Cage and the experiences of the Fluxus group, Brecht’s work updated the experimental avant-garde movements of the early twentieth century.

George Brecht. Events was the most comprehensive retrospective that had been carried out to date on the artist’s work. Curated by Julia Robinson and Alfred Fischer, it included around 350 pieces that explored Brecht’s artistic career from 1957 onwards.

This exhibition presents the art of George Brecht (New York, 1926) from his early works in 1957 to the present. It is the first major retrospective of this artist in almost thirty years, largely due to his reluctance to make a formal presentation of what is essentially the collection of an ephemeral and conceptual work. His art is a project of investigation in which he explores the nature and essence of experience. More than a creator of objects, Brecht is a producer of entities, materialisations of events which encompass chance, space and time. Originally, the audience was invited to interact with his works – to modify them and move their components. The inclusion of collaborative work in his practice highlights the profoundly expansive dimension of Brecht’s focus, one of opening barriers and “authorship” that initially defined the “event score”, which he would go on to expand almost indefinitely.

The exhibition is a chance to appreciate how, throughout his extensive career, Brecht never favoured one medium over another and how every project functions as a microcosm integrated into his work as an overall whole. It also reveals Brecht’s lifelong concern regarding the practice of a “meta-creation” that could take place in the chinks and crevices between creation and its representation. As a critical extension to the event, Brecht’s most recent projects converge with all the other facets of his work, demonstrating a permanent conceptual unity in the midst of such vast, insistent diversity.

Brecht’s artistic career began in the late fifties, while he was working as a research chemist in New Jersey. This dual situation enabled him to employ scientific models of the time to reflect upon experience, and to use art a means to represent his thoughts. In 1956-1957, he wrote a reference work entitled Chance Imagery, a systematic investigation of the role of chance in the 20th century in the fields of science and avant-garde art. The piece revealed his respect for Dadaist and surrealist projects as well as for the more complex aspects of the work of Marcel Duchamp, whom he considered the embodiment of the “artist-researcher”. At the same time he initiated a series of experiments he called “Chance Paintings”, randomly staining bed sheets with a clearly anti-pictorial, anti-representative intent. Brecht referred to these early attempts to convert time and chance into the basis of his work as a kind of “corrected abstract expressionism”. In this period, which coincided with the death of Jackson Pollock, he struck up relationships with artists imparting classes at Rutgers University, in particular Allan Kaprow and Robert Watts with whom he co-signed a text (A multi-dimension project, 1957). The piece was an attempt overcome and go beyond the huge influence exerted at that time by abstract expressionism, in pursuit of a form of advanced art, radical conceptual practices and multimedia.

Brecht’s closeness to John Cage, with whom he shared an interest for Oriental thinking, led him to attend the classes on “Experimental Composition” Cage was giving in New York. He encouraged Brecht to look for new mediums for his creative practice, such as the generation of a new (musical) score by means of procedures involving chance and the use of surrounding noise employed as sound ready-mades. Brecht was convinced that “experience in every dimension” could be highlighted and encapsulated in the shape of verbal scores and, from there, developed the concept of “event scores” with which he structured the space and time of his work, at the same time inviting the audience to participate in the piece.

This is precisely what happened in his first exhibition Toward Events: An Arrangement (1959) in New York’s Reuben Gallery. These works brought together objects similar in shape to the vocabulary emerging from Robert Rauschenberg’s assemblage and combination, and from the “collection” in the work by Joseph Cornell and Marcel Duchamp. One radical difference however lay in the insistent emphasis on the temporary and participatory nature inherent in the words “event” and “arrangement”. This quality alone reveals Cage’s impact and the originality with which Brecht had been able to broaden his sources. All of the objects made in the years immediately following this group of works included a variety of different types of scores. In some cases they would arise out of the creation of the object, while in others the object was discovered and Brecht subsequently wrote a score for it, thus highlighting the relationship between language and perception. Or, in the words of the artist, “ensuring that the details of everyday life, the random constellations of objects that surround us, stop going unnoticed.” The event-score was as much a critique of conventional artistic representation as it was a gesture of firm resistance against individual alienation, as may be appreciated in his last long-format score Motor Vehicle Sundown (Event) 1960 to John Cage. The score idea evolved between 1959 and 1962, until reaching the form of a simple white card bearing a few typed lines intended to propose an object, thought or action.

The early sixties was also a period in which Brecht developed his own critique of the institutional framework and mechanisms employed in the distribution of art. His first “Chair Events” in 1961, in which he placed a real score beside an unaltered everyday object, constituted an expression of resistance to the galleries’ demands to present his work in a more formal way. From that moment on, the design of models distinct from conventional channels would become an integral part of his work. His “Contingent Publications” were a postal address in New Jersey from which he distributed his scores and event objects. The “Yam Festival”, planned in conjunction with Robert Watts, was created as an alternative to the gallery system in that it produced art which could not be bought, spreading the notion of non-material artistic practice and at the same time organising representations or concerts of his most recent work, alongside that of other like-minded fellow artists.

This conceptual base was highly significant in the Fluxus context on the other side of the Atlantic, in which Brecht’s event scores were widely known and performed. Fluxus began, in fact, in Wiesbaden (Germany) with a series of “new music” concerts organised by George Maciunas using the radical scores created by Brecht and other artists in his circle, including Dick Higgins, Emmett Williams, Robert Filliou, Eric Andersen, Alison Knowles and Ben Vautier, among others. Maciunas published the scores and a series of transient works by this group of artists in the cheapest, most accessible form possible. The first of these multiple packages was a boxed collection of some 70 scores by Brecht, entitled Water Yam.

In 1964, shortly before travelling to Europe, Brecht proposed a new format for his work, that of the book in construction, which he called The Book of the Tumbler on Fire. According to Brecht, the title captured his perception of all his work as an “investigation into the continuity of different things”. The core of the book is made up of an important series of events in the form of satin-covered boxes. Brecht continued producing these boxes until fairly recently and they make up, along with the chairs, paintings, scores and all kinds of diverse formats, chapters of his unending volume.

The second part of the exhibition encompasses all of the main phases of Brecht’s career from the moment of his departure to the United States in 1965. He first travelled to Rome, and a little later to Villefranche-sur-mer to meet up with his friend and fellow Fluxus member, the artist Robert Filliou, and to found a “permanent creation workshop”, which they named “The Cedilla that Smiles”. This fertile period of joint activity may be explored in a separate section, which includes a little-known film made by the two artists.

Finally, the exhibition presents three projects that Brecht called “meta-creations”. The first, from 1968, is a slide-based lecture under the title The Chemistry of Music, which offers a critique of the lecture format as the predominating method of teaching. The second, The San Antonio Installation, is based on extracts from a popular series of French detective novels by the author San Antonio. The excerpts consist in an eccentric collection of articles (many of them found in French flea markets) which materialise details of the narrations and which present a kind of antidote against passive experience – in this case, the mechanical absorption of cheap literature. The third project is The Brunch Museum, an ingenious “exhibited object” of the life and work of W. E. Brunch, an imaginary figure of “great historical importance” invented by Brecht and the artist Stephen Kukowski. As in the case of the lecture model and novel, this project challenges institutionalised forms of representation and dissemination of information. 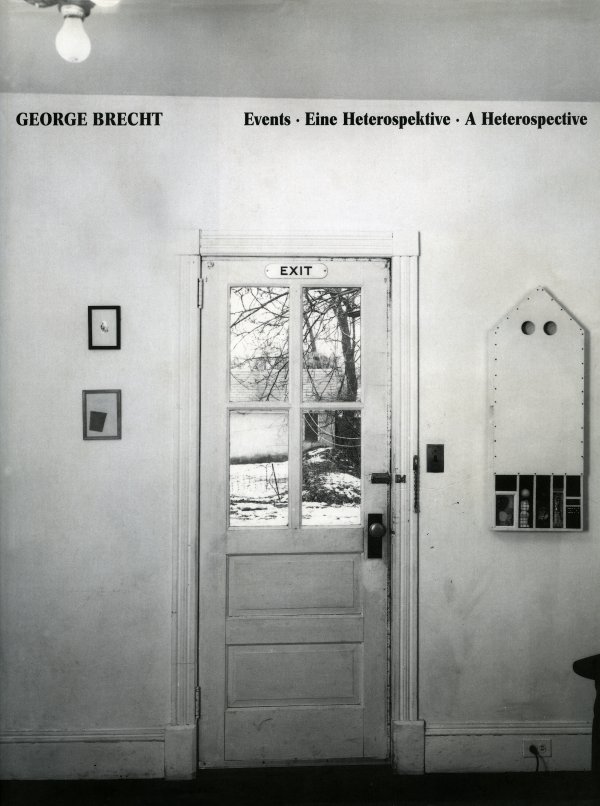