From the mid fifties up until his death in 1968, Marcel Duchamp would regularly spend three months each summer in Cadaqués. It was in this coastal village that the artist came up with part of his secret project Étant donnés (1946-1966). It was also here where, one day in 1966, he issued a cheque for ten dollars made out to his friend Peter Harnden, which would eventually become a ready-made in the Bombelli Collection.

Peter Harnden and Lanfranco Bombelli had chosen Cadaqués as the operational headquarters for their architectural activities and they soon made contact with the core of avant-garde artists and intellectuals who spent their summers there. When Harnden died, Bombelli wanted to pay tribute to him, and organised an exhibition to show and sell graphic works by several artists in order to raise funds for the restoration of an area of the local cemetery that was in ruins, which was were his friend wanted to be buried. The exhibition was a resounding success and led to the creation of one of Catalonia’s most emblematic exhibition spaces in the second half of the twentieth century: Galeria Cadaqués, which had Bombelli at its helm as ideologue, collector and cultural promoter.

The exhibition that MACBA organised shortly before Lanfranco Bombelli’s death in 2008 brought together works from the architect’s personal collection (by artists such as Eduardo Arranz-Bravo, Marcel Duchamp, Richard Hamilton, Albert Ràfols-Casamad and Dieter Roth) as well as extensive documentation that illustrated the programme of gallery’s programme of activities.

The Cadaqués Gallery has been important to the region of Catalonia since the 1970s (from local, national, and international perspectives), as it lead, produced and diffused contemporary art of the moment. This fall the MACBA is organizing a presentation of this gallery, its history and milieu, mostly through key works from the collection of its founder, Italian artist and architect Lanfranco Bombellli. The exhibition also analyzes –thanks to documentary materials (photographs, videos, publications...)– Cadaqués’ importance as a center for the 20th century avant garde: from Picasso to Dalí and from Marcel Duchamp to Man Ray, John Cage, Richard Hamilton, and Dieter Roth...all of those artists paid regular visits to Cadaqués.

This exhibition comes to us within the framework of the MACBA Collection and emphasizes its relationship with the gallery’s own program which developed consistently along its four artistic guidelines during its 25 year history: Constructivism (most of all, Swiss Concrete Art), Pop Art, the avant garde of the 60s and 70s (Cage, Hamilton, Roth...), and local artists represented by Catalonian abstract painting and new artistic trends in Catalonia in the 1970s and 1980s. The exhibition demonstrates the heterogeneity of those artists who exhibited their work in the gallery and focuses on the gallery’s role as a catalyst to artistic production during those years.

The Cadaqués Gallery not only incited expositive projects, but works connected to the city of Cadaqués such as Muntadas’ Cadaqués, Canal Local (1973) or Miralda’s Flauta i trampoli (1981), and those produced through the collaborative efforts of Richard Hamilton and Dieter Roth in 1976 and 1978, among others. This emphasis on the idea of production is an exception within a context in which the art market has given mitigated attention to the international panorama of art and its contemporary condition.

The exhibition allows us to inventory and critically revise those years of activity through two peripheries: Southern Europe and a physically small urban nucleus. Marcel Duchamp, John Cage, Richard Hamilton, Dieter Roth, Muntadas, Albert Ràfols Casamada, Max Bill, and Equipo Crònica, among others, are included in the exhibition. 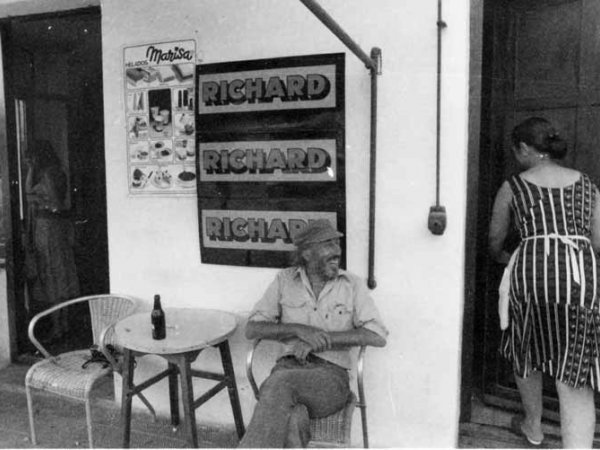 Richard Hamilton and his "Sign" at the Bar Melitón. Cadaqués, August 1975 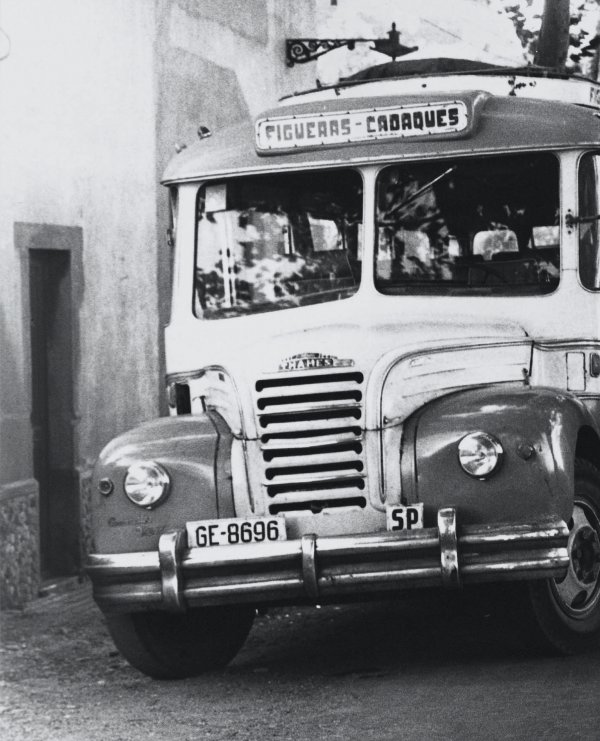