In relation to contemporary artistic practices, the work of Francesc Torres (Barcelona, 1948) lays halfway between the proposals of those artists who, in the mid-sixties, were in favour of institutional critique and those who, during the eighties, refused to be part of the art market by making work that was only viable within a museum space. Torres was a pioneer of multimedia installations at a time when Neo-Expressionism was the dominant trend. His installations are a critical reflection on power, politics, violence, memory and contemporary culture.

The Wunderkammer or cabinets of curiosities were a phenomenon that emerged in the sixteenth century as collections of antiquities and artistic objects, but also exceptional objects such as fossils, coral, exotic oddities, weapons, armillary spheres, etc. These were artefacts that reflected the economic clout and academic knowledge of their owners. In time, they became ‘time capsules’ of the moment at which they had been created. The principle of more or less systematic accumulation of that period brings us to Torres’ The Hermetic Bell: a sui generis Wunderkammer that is also an accumulation of layers of sediment, an archaeological site, a warehouse, an archive, a brain. In fact, Torres speaks of the archaeological campaign he has conducted, with the complicity of MACBA, to rescue from his archive – and memory – all those objects and documents he has preserved for years, rigorously ordained, unedited. In opening the boxes and files of his personal archive, the artist has discovered, to his surprise, the history of all the subjects he has been addressing and unfolding in his artistic production to this day.

The symbolic potential and the capacity for creating an abstract way of thinking of most of the objects, toys and images that the visitor will find in this ‘hermetic bell’ are responsible for the most critical, sharp and intelligent creations of Torres’ artistic career.

I suggest that what we officially disseminate as artists in the social arena is only an imitation of everything that, for one reason or another, we consider problematic, too real, unfiltered, a reflection of what has made us what we are as social, political and artistic subjects. Our work is supposed to be the mirror image of ourselves, but like everything a mirror reflects, as if it were a studio photograph, it suffers from the excesses of lipstick and makeup, of the side that flatters us the most and supposedly disguises the implicit ridicule of showing what we are not in every social projection. I’m not saying that the work of an artist is necessarily a lie, which it is; it is also a great truth, but one remodelled by the tailor of language and symbolic manipulation. It is proof of the servitude of all civilised people to the rules of polite society demanded by the barbarians.

The winter campaign in the autistic container. MACBA has forced me to conduct an archaeological campaign in the wrong season. In Europe, these things are done at the end of spring, when the days are longer, temperatures are mild and the weather is less changeable; the academic year has come to an end, as has doing research in the laboratory, and students have finished their exams. People are free to do field work, excavating right down to the substratum that hides the beginning of things, the accumulated time and the early specimen that appear while working under the sun and resting below the stars. It is a truly epic endeavour. But I’ve been forced to do it in winter, in shipping containers and within the walls of my own temporary home (they all are) in Barcelona, which is full of boxes that were sealed decades ago like miniature tombs from the Bronze Age, or like bunkers from the First World War buried after the explosion of an underground mine that left them intact inside, with the dead arrested in the midst of an unfinished activity that was once part of an inconclusive narrative. The gravitational field of history, whether personal or shared, is tyrannically intense, like a possessive mother. It never lets you forget where you come from or to whom or what you owe what you are; i.e., it is another mechanism of subjugation and emotional blackmail. Perhaps this is also the function of museums, all of them: museums of ethnology, anthropology, history, art, matches (after all, there’d be no civilisation without fire… And by the way, who exactly invented the flint?). Perhaps this is also the function of nationalism, religion and football: straightjackets to ensure that the present is not the result of freedom of action but of the tyranny of the past. The best example of enlightened despotism is an illustrated history book. I imagine History as a customs-free zone full of shipping containers piled up to the stratosphere and extending beyond the horizon.

Before the cave, before the museum, the analogical register was already installed in the skull of a 430,000-year-old proto-Neanderthal like the one found in Atapuerca. The owner of this skull was not capable of representation. He had some kind of symbolic behaviour – at least the late Neanderthals had: they buried their dead – but he could not reorder the world by representing it and explaining it through his representation of the world when reordering it (excuse the clumsy sentence…), thus staying in the never-ending loop we call art. That’s something the Cro-Magnons did; they still do, we are all Cro-Magnon. The brain from Altamira is the same as the one in quantum physics, dodecaphonic music and the iPhone. So it would appear that the differences between two species capable of symbolic behaviour, but only one of them capable of representation, are cerebral and neurological. No more, no less. Structurally, the Neanderthal brain favours the areas of memory located in the occipital side and ‘neglects’ the frontal neocortical areas that regulate language and abstract thought, which are fully developed in ours. It seems that the Neanderthals had a prodigious memory that enabled them to have a complete knowledge of their species, literally, and never forget anything, except when ill or injured. But since they were incapable of abstraction, they couldn’t represent. To symbolically translate a three-dimensional world into a twodimensional analogical equivalent is a deep exercise in abstraction that requires a colossal evolutionary process. The ‘moment’, made of hundreds of thousands of years of genetic evolution, when one of our ancestors made a mark on the wall of a cave with his hand covered in iron oxide, or drew the figure of a woolly mammoth, is one of the most portentous episodes in the history of the human species, a powerful and defining statement of who we are and where we stand in the world. The Cro-Magnon men of Altamira didn’t know that what they were doing was art, as we understand it now, and they didn’t need to. But it’s a good thing that we know it. In any case, it marks the transition from biology to culture, from genes to memes, and is the model of behaviour that we’ve compulsively repeated since Lascaux, Altamira and the Chauvet cave, not to mention Romanesque and Gothic churches, Renaissance palaces, bourgeois homes, general and modern art museums, until we arrive, in these uncertain times – they were always uncertain –, at the contemporary art museum, a Western social-democrat invention from the post-war era that has become universal. In fact, all the examples I’m describing are European, yet the same analysis could apply to any culture, although the only people who have a notion of art, especially contemporary art, as something complete and seemingly independent from the dominant vectors of power, are Western people. As repositories of the forms in which we have interpreted the world, these symbolic spaces can be seen as virtual copies of the cranial cavity that originated them. They are analogical brains, files, archives (so fashionable), non-digital exogenous computers of the species. This is how cave paintings have often been described, as depositories of a so-called ‘parietal’ art. I say this because I’m fascinated by the idea of the origins of ‘art’ not being cultural, but biological and neurological; by culture being the best excrescence of genetic evolution, of nature itself, a prodigious accident of which I’m lucky (or unlucky) to be part.

The marrow of Torres’s Tower
In the self-supporting structure inside the Museum’s tower (the exhibition) there is a world constructed and made of objects taken from the tide of history by an accidental crebeiro* whose work consists of giving meaning to the spoils left behind by a unique tempest. On this impermanent scaffolding can be found graphic documents, toy cars, weapons, remains from the Battle of the Ebro, Russian felt boots, Mexican and Catalan masks, a gas mask from 1937, a wax portrait of Dzerzhinsky, of Lenin in oils, of Mao in copper, a porcelain Chinese Red Guard, shotat and not shot-at books, a piece of concrete from General Rojo’s command post in Gandesa, an ice axe, amateur paintings, a photograph of a chimpanzee dressed as a child, a Magdalenian hammer, the Yalta Conference painted by Santiago Ydáñez, a bottle of Agua del Carmen found in Montjuïc’s antiaircraft shelter, the complete collection of the magazine Algo from the 1930s, an Australopithecus afarensis, a Baroque Christ vandalised during the Spanish Civil War, Christopher Columbus resting, a dented door from a Barcelona taxis, a Turkish ‘Afghan’ sheepskin coat favoured by Western hippies in 1968, fossils, penitentiary craftsmanship, stones, shoes, coins, stamps, games, buttons and hand grenades. On the wall outside this self-supporting structure there is also some documentary material of moving images from the twentieth century up to the late eighties (the fall of the Berlin Wall and the end of the Cold War), as if at some point all this central accumulation had been turning on itself and spewing out matter like a galaxy in rotation. All of these objects were needed to fill up several attics and this museum space. All of these objects, plus the ones that got lost on the way, were needed to demonstrate what really configures a way of seeing and being in the world. In other words, the original material that, in the case of yours truly, has become art. 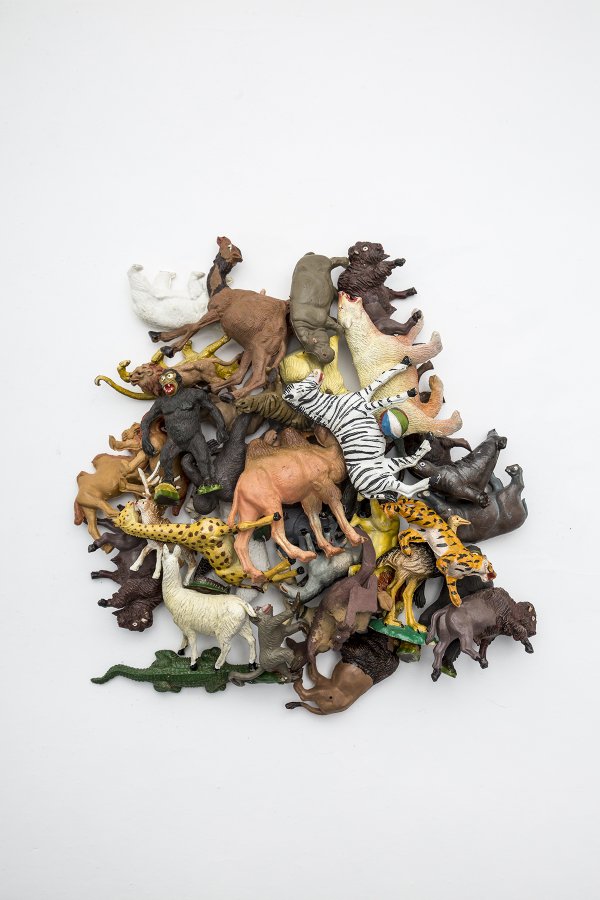 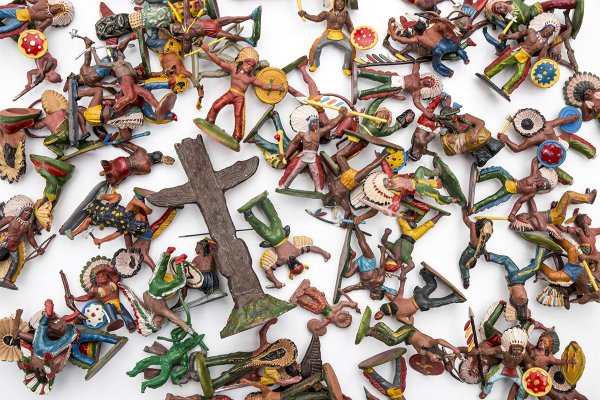 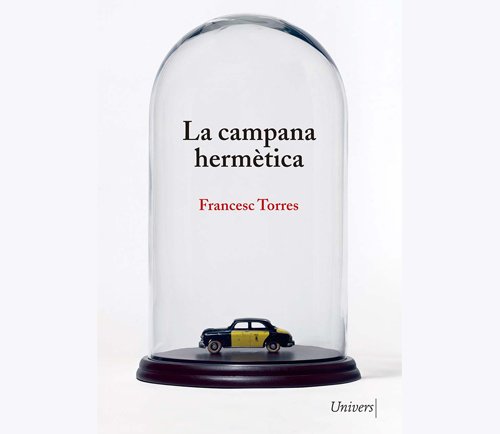 Let’s talk about... Francesc Torres. The Hermetic Bell. Space for a Non-Transferable Anthropology 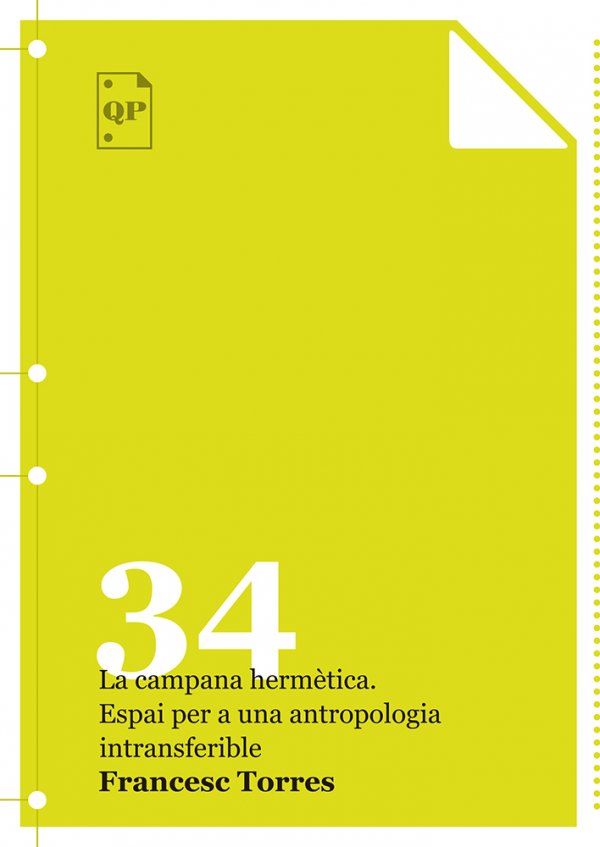