A pioneer of the language of installation art, Francesc Torres (Barcelona, 1948) critically reflects on the diverse manifestations of culture, politics, memory and power through his multimedia installations, which give him a unique place in the art of the last few decades. The MACBA retrospective includes a selection of works carried out from the end of the sixties to the present with recent productions. Moreover, this exhibition features other unfamiliar or little known aspects of his work, such as the influence of poetic practice and, notably, the importance of drawing and of the work on image that links Torres to the language of painting.

Francesc Torres has spent most of his career outside Spain: at the end of the sixties he worked in Paris with the Polish sculptor Piotr Kowalski, then between 1972 and 2002 he lived in the United States, where he created most of his installations, and in the late eighties he worked in Berlin for two years. This factor, determinant for the construction of his discourse, explains why his work has had such limited dissemination in our country, despite his continuous participation in cultural life as an essay and article writer in newspapers and journals.

Torres' work is essential in revealing a kind of continuity of the avant-garde practices in the eighties and nineties, an aspect often questioned by the media, the institutions and the market. Although in the sixties the avant-garde practices formulated the first examples of institutional criticism and in the eighties the artists opted to create works for the museum as a means of escaping the pressures and conditionings of the market, his work, in contrast, has been located halfway between these two positions. On the one hand, Torres has used the space of the cultural institutions as a support and means to convey the analysis of the links between ideology, power and submission. On the other, his work makes clear a declaration on the position of the artist in terms of society: the relationship between individual and group, the role of political discourse in terms of social action, and the set of received beliefs that make up a specific collective thought. For this, Torres recovers the most effective techniques invented in the early 20th century and perfected by avant-garde artists, such as John Heartfield and Josep Renau or, further back, by Francisco de Goya and Honoré Daumier. The artist not only represents the surrounding reality but seeks to change it.

Francesc Torres' work shows two thematically separate moments. An experimental poet, he reaches artistic practice through researching language, influenced by the work of Joan Brossa. Although there are no remaining works from this first period, his interest in language can be traced to a series of objectual works that combine formal searching and engineering through the notion of prototype and the idea of fabrication and authorship, such as Prototype for a Series of Multiples in Polyester (1967-1968). But Torres is fundamentally interested in the work to the extent that it is action, as a means of transmission and contact with the viewer. The poem exists when it is read, and the work when the viewer sees it. Therefore, in 1968, Torres proposed a series of “cut-out” sculptures that required the participation of the viewer, as in the case of Poème-eméop (1968), Objeto para deletrear la palabra poema (1968-1969), P…O…E…M…A (1968-1969) or Sculptura (1969), a Plexiglas case full of water in which the letters that form this word float.

At the end of the sixties, Torres was a direct witness of the multiple proposals of artists who reacted to minimalism and included the recourse to the organic and the use of biological material, as we can see in the work of Hans Haacke or more emphatically in that of Robert Smithson. In parallel, Torres researched organic systems and natural materials as a metaphor of objectivity and of control over the elements. Photography entered the stage as a documentary support that not only accredited the existence of a work but finally became a material in itself, as happens in Sculpture for Determining Perfect Horizontality (1968) or Suspension No. 2 (Air-Helium) (1969). His scientific interest took him to documenting processes where chance played a part, as in Wind Sculpture or Observing What Happens to a Sheet of Paper Exposed to the Wind (1969), the series Reflexión I, II, III, from 1969, where the reflections and shadows are documented and measured, or in later works, such as Dos distancias or Dos diagonales, both from 1972. Geometry also allowed him to carry out a series of writings on the landscape, as in the case of Triángulo semioculto por una nube (1972) or Pasando de la oscuridad a la luz (1972).

Gradually the urban landscape took on a leading role, as happens in Triángulo imaginario delimitado por el sol (1972), Constatación de la luz del sol en el piso trece (1972) or Statement About the Existence of a Light Triangle on Sheridan and Belmont (1972). This change of context heralded a turn towards a more subjective position in a series of works from the early seventies in which the artist introduced the performative factor and the use of his own body, in tune with artists such as Chris Burden and Vito Acconci. Works representative of that moment are Perceptual Analysis of Three Dimensions (Three Points of View), Calendario or Sustracción de peso (del edificio) and Occupation of a Given Space Through a Human Action, all from 1973.

The research into the formats of action soon resulted in a narrative dimension that would provoke the abandonment of the corporal. In the mid-seventies, the word of the artist himself constituted an essential element. There then emerged one of the constants in his work: memory as territory of construction of politics. The actions An Attempt To Decondition Myself (1974) or Almost Like Sleeping (1975) meant a rupture from the materials used until then, and the following, such as Everybody's House (Is Burning), from 1976, would offer us the transit of a personal subjective theme to the perspective of the events of history, of which the installations Construction of the Matrix (1976) and Accident (1977) are clear exponents.

The first, created in the context of the 37th Venice Biennale, just after the death of Franco, approaches the profound link between ideology and violence. Accident also suggests another of the constants in Torres' later work: the association between machine, speed and machismo and politics as failure. The next rooms exhibit works in which Torres analyses and denounces the relationship of the group with its recent history and with the present, taking as a paradigm a local conflict: the Spanish Civil War and the Franco dictatorship as an expression of universal and timeless violence. In this way, a thematic line began that has continued until the present, and which is expressed in works such as Residual Regions (1978), Belchite / South Bronx: A Trans-Cultural and Trans-Historical Landscape (1988) and Oscura es la habitación donde dormimos (2007).

We refer to pieces which materialise in multimedia installations created for a specific place and in function of it. In most cases, their characteristics impede reconstruction in the interior spaces of the museum.

The eighties, a period when Torres produced most of his installations, represented a return to order on the map of artistic categories but especially in all tastes and the media presences, which certified the reappearance of expressionisms and pictorial abstraction. Torres' art, in contrast, is realistic and is intimately linked with the sphere of collective conscience. It is decisive that Torres lived in that time in the United States when intellectual and institutional diversity allowed him to develop a frenetic activity based on the conception and execution of projects of a broad conceptual and material ambition. Torres gradually refined a language closely linked to theatre in installations that represent the dramas and miseries of the ideologies of the present and their genealogies: war, violence and death institutionalised in the form of moral oppression by some individuals over others.

The exhibition reveals to us an artist concerned with image, close to the painter. Torres emerges as a painter of history through the constant themes of his vocabulary: the machine, speed that erases the landscape, and the prehistoric figure. Together with the images, through associations of objects, Torres synthesises the vocabulary he has put into play in the installations and sculptural works. We are faced with the logic of the collage and the alteration of the media image, which comes from publications, television or cinema. A quotidian landscape of violence and destruction, as in the case of Newsweek Series (1990). We are presented with an artist deeply concerned with the physical qualities of the works: the tonalities of colour, the methods of constitution of the image, and the material links with certain artistic traditions. A series of ink drawings from 2007, The 1930s and 40s in the Air, explores the particular iconography of the fighter planes and the typologies of these machines. The drawings remind us of passages of previous works and return us to a world linked to childhood, where the fascination with speed and battle are explained by innocence.

The title of the exhibition clearly informs us of the position of the artist after his long career. Da capo is a score notation to tell the musician that he/she must resume the performance of the piece from the start. Torres associates the familiar experience of the resistance against fascism and the Franco dictatorship with the problem of collective memory and with the major role of the war as an expression of the confrontation between ideologies, with speed as a condition of the battle, with competition as sublimation of enmity in times of peace, with the symbols and signs of masculinity as expressions of threatening, dominating and destructive armament… and he later turns back, towards the archaic symbols, towards the archaeological remains that denote civilisation and lack of civilisation, which speak of rationality or irrationality rooted in the human.

Become a Friend
Share
Francesc Torres 'A spherical, non-linear text, an installation of words and concepts on a space made of paper' from the publication 'Francesc Torres. Da Capo' 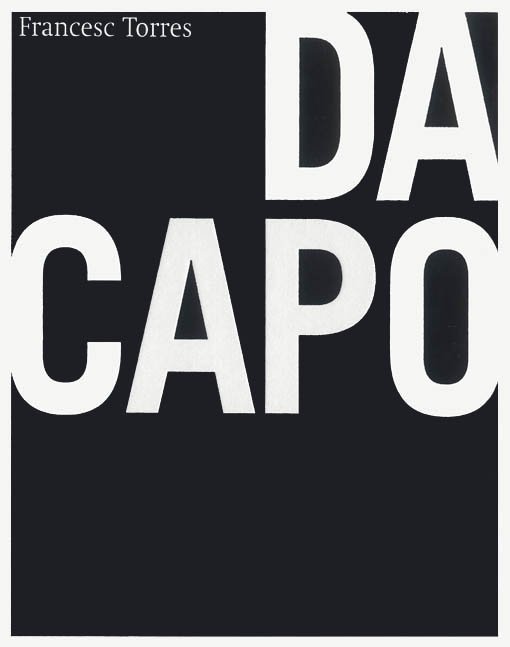