L’Action restreinte (Restricted Action) is the title of an 1897 essay by the poet Stéphane Mallarmé that describes the limits and the concentration of poetic action, and writing’s ability to dramatise the tensions between the ideal and the mundane. The exhibition Art and Utopia. Restricted Action took Mallarmé’s poetics as a base from which to revisit some key moments of the art produced during the first seven decades of the twentieth century. This journey that cut across the history of modern art left aside the traditional antagonisms between formal innovation and political effectiveness and sought to show that the only possible utopia lies in language, in the “restricted” but also expansive action of the poetic act. Marx was reconciled with Mallarmé. And a chain of apparently invisible resonances linked the writings of the French poet to the works of artists such as Odilon Redon, Marcel Duchamp, Antonin Artaud, Marcel Broodthaers and Jeff Wall.
The exhibition brought together a total of 900 works – including drawings, paintings, sculptures, objects, installations, photographs, films, books and documentary material – which set up alternative accounts of the history of modern art.

In 1897, Stéphane Mallarmé (1842-1898) published his essay, Restricted Action (L'action restreinte) in Divagations where he describes the limits and the concentration of poetic action. At the end of the nineteenth century, after the death of Victor Hugo, the poet could no longer claim to operate directly in the political arena or even to set himself up as a moral conscience. He could talk about the world, give it a verbal equivalent, but he could not change it. His activity, however, is not contemplative. He realizes an action in a "restricted", but boundless, realm which does not belong to him but which he can reevaluate and even redefine. This is the realm of language and languages; it is the scene of writing and the space of the book as a "spiritual instrument."

In an era in which progress is measured by information, the book is often related to the newspaper, but it should be differentiated from it in the same way that poetic language is differentiated from the instrumental definition of language as a means of communication and propaganda. In 1921, the Russian poet Ossip Mandelstam echoes Mallarmé when, in the context of a postrevolutionary society and culture, he writes: "Social differences and class antagonisms pale before the new division of people into friends and enemies of the word…" This exhibition reexamines some key moments in the exchange between art and poetry in the twentieth century until the end of the 1970s. The Mallarmean poetic serves here as a thread for a history of modern art with its hold on language and its dissemination. In March 1970, Marcel Broodthaers, declared: "Mallarmé is the source of contemporary art. He unconsciously invents modern space." Broodthaers was thinking principally about the word constellation set up in Un coup de dés (1897). After it was belatedly published in book form in 1914, the poem effectively became the prototype for all investigations into the confluence of poetry, typography and visual art. Appollinaire's Calligrams, contemporary with cubist papiers col-lés, the Futurists' Parole in libertà, and the Word as Such of Russian poets Velimir Khlebnikov and Alexei Kruchenykh, are derived almost directly from this poem or differentiate themselves from it through a dynamic of avant-garde radicalization. This genealogical thread continues with the emergence of concrete poetry in the 1950s.

Plein air impressionism since Manet and the prismatic structure of post-Cézannean cubist painting represent two poles of the Mallarmean poetic that were already achieved in the sonnet's concentrated form (especially in Une dentelle s'abolit) at least ten years before Un coup de dés. Braque's and Picasso's cubism was often called "hermetic," as were Mallarmé's poems. Gino Severini speaks of a "divisionism of forms" and a "copenetration of planes" analogous to the task of the word in poetry. The collaboration between Juan Gris and Pierre Reverdy participates in this bipolarity of plastic writing. Parallel to this, the fantastic of Odilon Redon embodied the idea of suggestion, which defined symbolism in its opposition to impressionist optics as well as to description and literary narration. The promotion of a dream-state imagination in the twentieth century is inscribed in this tension between the optic and the symbolic. Here, collage and montage procedures used by post-cubist constructivism and surrealism, both derived from Dada, achieve historical depth. The dialogue between art and poetry – definitively condensed in Miró's peintures-poèmes – also opens onto other forms of visual creation such as photography and film. Rodchenko illustrates Mayakovsky's Pro Eto with photomontage, and the abbreviated signs of Paul Klee are akin to the disarticulations of the burlesque. Beyond that abstraction called "geometric," the emphasis on the essential constituents of painting – point, line, plane and color – participates in a speculation on the genesis of form that has much in common with poetic language. With Marcel Duchamp, a Mallarmé admirer and reader of Jules Laforgue, symbolist suggestion found its present form with mechanomorphic irony.

Nevertheless, as Duchamp's extra-pictorial activities indicate, the resonance of the Mallarmean poetic exceeds the genealogies of poetry and the visual arts. Mallarmé was also interested in music and the arts of theatre and dance while refuting the Wagnerian model of the total work of art. What is more, the speculative demand of Un coup de dés' author aimed to reestablish mystery in poetic experience between the vestiges of faith and the ornaments of the everyday. This distance defines the opening of modern space: from the great theatrical reformations of Edward Gordon Craig and Adolphe Appia to the "activities" of American post-modern dance, by way of the association between the biomechanical and grotesque in Meyerhold set against a symbolist backdrop.

In 1925, the collaboration between Hans Arp and El Lissitsky for Die Kunstismen (Les ismes de l'art, The -isms of Art. 1924-1909) witnessed a common search for synthesis in modern art at the two extremes of the European continent despite the differences in language. Similarly, the exemplariness of Sophie Taeuber's work is explained by the way it transcends the division between the fine and applied arts, establishing a new continuity between traditionally separated spaces: the studio, the domestic environment, the stage and the dance floor, at human or reduced scale. This corresponds to the most demanding formal investigations in the arts of the everyday in postrev-olutionary Russia. Mallarmé had already imagined an anthropological reconciliation of modern art, liberated from religious representation. But that anchorage was revealed to be just as precarious as the practice of poetry. À propos of Georges Braque, Carl Einstein wrote at the beginning of the 1930s: "Art has meaning only in so far as that with it one defines and also creates a vision of the world, a myth. That is why the old optic has for a very long time no longer corresponded to psychic structure." The same author confirmed "the collapse of rationalized man" and denounced the superstitious belief in a utopia of technological progress. In the 1930s, the distressing pressure of the times brought the model of the myth back to the debates as well as to the attempts at a synthesis between rationalist utopias and a somewhat reasoned neo-primitivism, between constructivism and surrealism. Echoing the work of James Joyce, photography became the privileged medium for a poetic anthropology of the quotidian and the sacred (Evans, Sander, Hausmann, Albers, Levitt).

Immediately after the Second World War, Antonin Artaud's return to poetry – after the failure of his theatrical attempts in the 1930s – corresponds to a necessary retightening of the myth into the "restricted action" of trace and proferation. In 1933, Artaud had defined Mallarmé's exemplariness: "A nothingness which resolved into the infinite after having passed through the finite, the concrete and the immediate; a music based on nothingness since one is struck by the sonority of syllables before understanding their meaning." With the war and the concentration camps, nothingness acquired a resonance of terror and inhumanity. Wladyslaw Strzeminski produces his collage series To my Friends the Jews and Rossellini realizes the film Germany, Year Zero. In those European art circles centered on art informel, primitivism is more than ever underwritten by a desire for exorcism (Henri Michaux, Wols, Jean Fautrier). Antoni Tàpies dramatizes Miro's writing. In the United States, what Rauschenberg revives at the end of the 1940s is rather the legacy of Dada and Duchamp transmitted via John Cage, while an American painter living in France, Ellsworth Kelly, continues the trajectory of concrete art.

In the 1950s and 1960s, the augmentation of the Mallarmean corpus (with the publication of the Correspondance and notes on the Book) coincides with the introduction of the linguistic model in the humanities and the emergence of the artistic culture of the neo-avant-garde. Roland Barthes describes a common "structuralist activity" in literature, music and the visual arts. The impersonality extolled by Mallarmé ends in "the death of the author": a slogan-formula for conceptual art inspired by structuralism, some representative pieces of which were selected from various fields and published in Aspen, no. 5-6 in 1967. Inspired by information theory and the structure of serial music, Umberto Eco substitutes symbolist suggestion with "the open work," which he defines as "a field of interpretive possibilities." Yet restricted action must still differentiate itself from new technological utopias in an era of economic expansion. In La Ricotta (1963), Pier Paolo Pasolini makes Orson Welles say: "I am a force of the past." From his retreat on Utopia Parkway in New York City, Joseph Cornell renews the poetic object and the surrealist marvelous, relating them to the symbolist imaginary.

The book, which Mallarmé calls the "total expansion of the letter," continues to be the counter-model to mass media, but it has lost its sacred dimension due to contamination: it has been vulgarized. The inclusive logic summed up by Jean-Luc Godard –"everything should be put in a film" – contrasts with the "archaic silence of the book" (Walter Benjamin) whose plastic equivalent is Tony Smith's black cube, Die (1962). Parallel to Broodthaers and his Peinture littéraires, another poet-artist, Öyvind Fahlström, proposes a synthesis of the Mallarmean tradition transformed by surrealism (Roberto Matta) and popularized by pop. Detours of play and humor disrupt the confrontation between the pictorial and the conceptual. Dieter Roth's Munduculum responds to Piero Manzoni's fixed Alphabet. With his torn posters, Raymond Hains finds proof in the street of a Matisse-Duchamp-Schwitters alliance under the sign of Mallarmé.

At the end of the 1970s René Daniels' painting, La Muse vénale, inspired by a poem of Baudelaire, indicates the exhaustion of the cultural alternatives proposed by the neo-avant-gardes. It likewise demonstrates a poetic gaze that knows how to detect the anachronisms of the present. "Misinformed," Mallarmé writes, "anyone who would proclaim himself his own contemporary." Artaud denounced the "lie of being". Mettere il mondo al mondo (Alighiero e Boetti) does not participate in the production of material goods or signs: formal invention is a symbolic activity, a concrete work within language. Drawing participates in this activity, as Philip Guston's graphic work since 1967 shows (often realized in collaboration with poets). It is likewise demonstrated by Nancy Spero's 1969 variations on the "written drawings" of Artaud and the Image-poem by Gunther Brus in homage to Odilon Redon. In his photographic work since 1978, Jeff Wall revisits the tradition of the painted theatre in order to interpret the conditions of speech and narration, as well as the conditions of any act of poetic expression, in the enigmatic environment of the everyday. 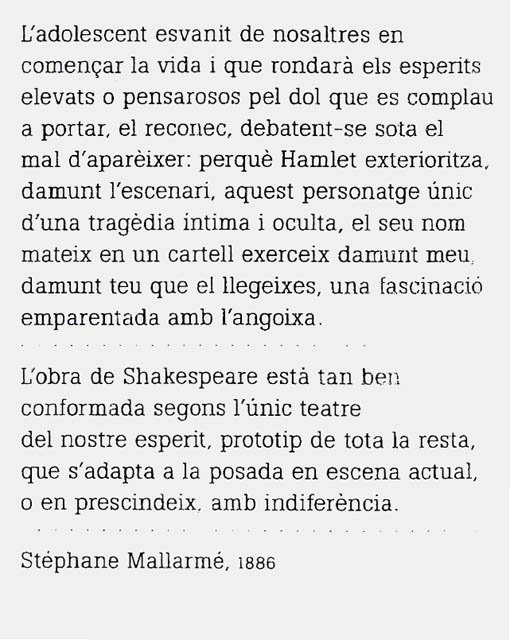 Exhibitions
Art and Utopia. Restricted Action
Jean-François Chevrier, Stéphane Mallarmé
I like to work with what is often called "cultural heritage", but the materials that I use are banal and clichéd, like sugar blocks, doors, couscous, rugs, official documents.
Latifa Echakhch