The work of Antoni Tàpies (Barcelona, 1923) played a fundamental role in Catalan art and culture during the second half of the twentieth century. But in spite of the numerous exhibitions and publications organised around the artist’s work, it continues to give rise to stereotyped interpretations in which it is linked to the Romantic myth of the artist as creator of spontaneous gestures, in this case attached to an Orientalist mysticism of symbolist origins.

Antoni Tàpies. Retrospective aimed to return the myth to history. The exhibition sought to reinterpret the work of Tàpies, starting from an exploration of its material nature: matter that is constantly moving and changing, that leads us to the performative nature of the pictorial act and of its contemplation, and at the same time invokes the obsolete and fragmented status of the contemporary subject.

The exhibition brought together over one hundred works – including drawings, paintings and objects-assemblages – in what was the most comprehensive exhibition on Antoni Tàpies to date.

Seen in perspective, maybe I could say that what is happening to me is what happens to those writers who deep down are always writing the same book. With the possible variations that my work might have suffered from my long career, I consider the whole of my production a single work.

This retrospective exhibition of Antoni Tàpies (Barcelona, 1923) includes over a hundred works dating from the 1940s to the present-day, and proposes an exploration of the material nature of the work of Tàpies as a basic principle for understanding his influence and position in the history of contemporary art. Tàpies's career is characterised by his consistency and unity, but at the same time reflects inflections that reply to oscillations of different aesthetic paradigms.

Tàpies is an artist who straddles two different historical and cultural moments. On the one hand, his subjects and obsessions, with roots in daily and even waste elements, are closer to the generation that reacted against abstract Expressionism; on the other, his aesthetic postulates basically line up with existentialist currents.

The exhibition starts with a selection of drawings and self portraits dating from the 1940s, where we can already appreciate Tàpies's thematic aspects and the way he will use materials when he reaches maturity. These motifs, such as the esoteric signs and self referential calligraphy, the countryside, and the ambiguous use of the body and sexuality, arise from contact with the different primitivisms, like children's art or the art of the mentally ill; from the graffiti photographs by Brassaï, and also from the influence of the surrealist Joan Miró and Max Ernst, and the work of Paul Klee.

In those early years of his life, Tàpies's readings were of great importance: authors such as Jean-Paul Sartre, Henri Lefebvre and Karl Jung, the scientific theories of Einstein and Plank, who offered another view of reality, the mystical texts of Ramón Llull and oriental philosophy made him understand his work as an act of perception of the world, where matter is inseparable from the represented image. His work, close to the concepts of the low and sacred expressed by Georges Bataille, shows his concern for inert matter, decadence, the fragmented body and ritual.

From 1954, Tàpies removed all apparent figuration from his painting and worked in the so-called "matter painting", characterised by an organised composition and surfaces with dense textures, with a predominance of ochre, grey and brown, with a geological appearance or similar to a wall. For Tàpies these works involved the discovery of a new language that enabled him to recreate a world where objects cannot exist aside from their own matter and the subject. The basic things in these "walls" are not the plastic features derived from textural qualities or colour tones nor the represented object, nor the dawdled drawing. The essential things are the intentional elements with which the artist reports the subject, the forms it takes on, the signs printed in it; examples of this are works such as Blanc amb taques roges (1954) or Pintura núm. XXXV (1956). Tàpies intends that observers perceive painting as an event, as a matter in a state of movement and constant change.

Although Tàpies had constructed objects since the 1940s, such as Capsa de cordills (1947) and Porta metàl·lica amb violí (1956), it wasn't until the mid-sixties when the elements of exterior reality took on a more defined objectual character in his paintings. The human figure appeared again, but did so representing alienated man, an anti-hero of abject postures, a fragmented body, like in Relleu gris sobre fusta (1965). In the 1970s, the time of expansion of arte povera and Post-minimalism, conceptual manifestations, and a renewed interest in the object induced in the light of Dalí, Tàpies's works took on three dimensions, as can be seen, for instance, in Taula de despatx amb palla (1970), Cadira coberta (1970) and Fusta plegada i vas (1970); in these works we can also find daily elements such as slippers or mattresses, alongside fragile perishable materials that refer to autobiographical elements.

This use of humble materials in Tàpies's work gradually accentuates a social intention that expresses the anguish caused by the oppression of late Francoist society, as occurs in L'esperit català and 7 de novembre, both from 1971. In the words of the artist: "The social and political situation of my country has always had a significant repercussion on my work. I believe this has to do with the fact that the conception of art for art's sake is not acceptable to me. I have always had a utilitarian attitude towards art." This social utility of art for Tàpies comes from the possible introspection and deep contemplation contained in works of art. The artist takes on the role of a magician, whose function is to recover ritual and give art work back its ability to modify awareness.

In recent decades, the work of Antoni Tàpies responds to the new political and cultural situation of democratic Spain. A widely renowned artist, he confronts the very historiography of his painting using large formats and materials such as varnish, with which he attempts to tension the very constrictions of this language discovered in matter paintings. His use of varnish determines a more fluid, asymmetric composition, with a predominance of gestures, stains and transparency, and is accompanied by his renewed interest for oriental art traditions and culture. The transformation of materials, the passing of time and the presence of death, as occurs in Rèquiem (1995), bring together the themes that have remained constant since the outset of his artistic career. 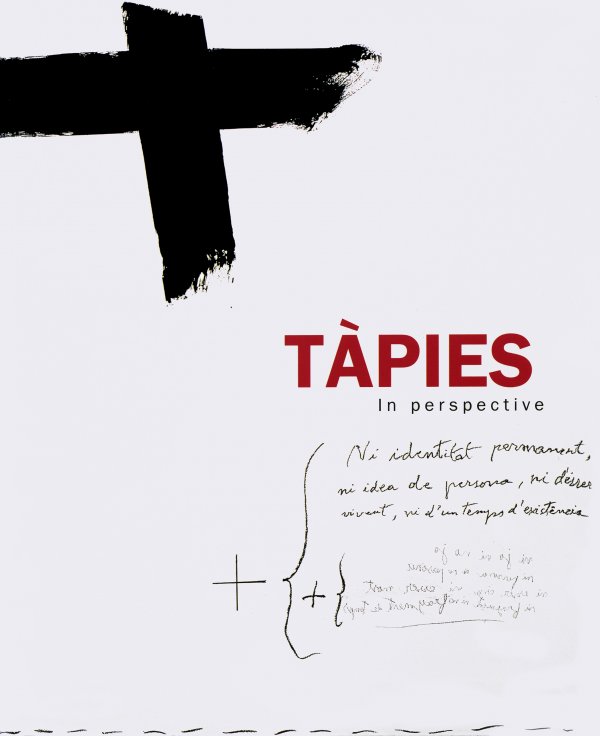