Antagonisms. Case studies was a museum-based research project that analysed the political and activist aspects of artistic practices from the sixties to the present. Through an extensive collection of works and documents, it questioned the nature of the aesthetic artefact and posited the use of art as a tool for social observation and critical practice.

At a time when museums had lost much of their traditional social credibility as spaces that bring together and legitimate the transformative power of art, Antagonisms explored concepts such as the occupation of the streets as a theatre for spontaneous activities, art as service, fiction and the construction of historical memory, the post-functional object, activism and collaboration, the questioning of the concept of authorship, alternative exhibition models, and the function of artistic practice in the ideological domain.

An exhibition analysing the political aspects and the element of activism in the artistic practices that have emerged from the second half of the fifties up to the present day. The repertoire of this show questions the aesthetic artefact and posits in its place a utilization of art as an instrument of social observation and critical practice.
The project deploys works and documents with the aim of stimulating debate on the role of the street as a theatre for spontaneous activities, art as service, fiction and the construction of the historical memory, the post-functional object, activism and collaborative working, the questioning of the concept of authorship, alternative models of exhibition and the function of artistic practice in an ideological context.
Read more
Become a Friend
Share 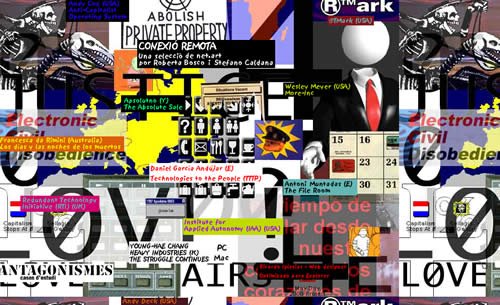