Under the title A Short Century, MACBA presents a new selection of the MACBA Collection, which follows a chronological (albeit not linear) route that begins in 1929 and takes us up to the present. The title of the show proposes a word play with the expression coined by British Marxist historian Eric Hobsbawm in referring to the period between the First World War (1914) and the collapse of the Soviet Union (1991), conceived as the prolongation of “a long 19th century” (another Hobsbawm term), the period from 1789 to the start of the war in 1914. With regards to the museum collection, a set of works from this “short century” of barely 90 years are presented, evidencing some of the fundamental tensions between various artistic manifestations and tendencies, and between them and other cultural expressions, with their respective social and political contexts. One of the identifying traits of the MACBA Collection is the desire to respond to the canonical narratives of art history and simultaneously build new narratives on modernity and the contemporary era from the unique location of Barcelona, in the south of Europe but on the north side of the Mediterranean.

Over various sessions, this course addresses some of the key questions explored in the exhibition, shifting the curatorial narrative to focus in on various specific issues in the show, thus broadening the view on key moments in the historical period engaged. As if a set of footnotes, the sessions making up the course will explore the following issues: the tension between utopia and crisis as intrinsic to the 20th century; the situation of Barcelona in the maze of European modernity; the development of avant-garde movements between the years of the Republic and the 1959 agreements with Eisenhower, coinciding with the entry into the Franco government of the technocrats; the reinvention of domestic space under Franco; art as propaganda and action around the 1960s; feminisms in the context of the Spanish state in the 1970s; the AIDS crisis and its impact on the art of the 1980s; and the decade of the 1990s, the celebration of the V Centennial in 1992 and its impact on artistic theory and practice of the time.

*Photo: Guerrilla Girls "Republicans Do Believe in a Woman's Right to Control Her Own Body!" 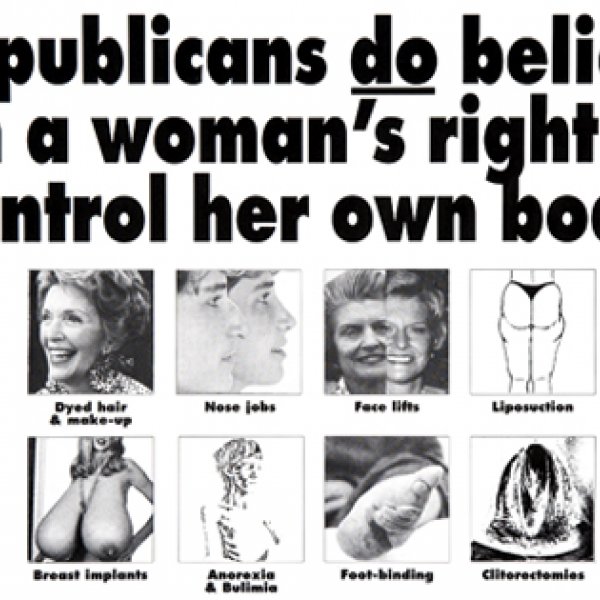 .
Share
Full programme of the seminar 'A Short Century'

FROM 15 OCTOBER TO 19 NOVEMBER, AT 7 pm
Venue: Auditori Meier. Access for people with reduced mobility through the Meier building (museum reception)

Admission:
Fee: 20 €.
Students: 10 €. 5 € individual session only at the ticket office if places are available. Free admission: Friends of MACBA