The programme at MACBA is an extension of Ribot Constellation presented at the Mercat de les Flors. This project is comprised of works for the stage and video installations encompassing 25 years of artistic creation and offering an exceptional opportunity to get to know and enjoy this artist who will be presenting her pieces live, many of them for the first time in Barcelona.

The Mercat de les Flors presents Panoramix (1993–2003), a seminal work, premiered at Live Culture-Tate Modern in London (2003), which brings together the first three series of Pièces distinguées in which La Ribot slides alone among the public for three hours. In addition, she will present Laughing Hole (2006), a six-hour choreographic performance in which laughter becomes a political act. Four video works, carried out between 2001 and 2014, complete the Mercat constellation, which includes a tribute to the composer Carles Santos.

For its part, MACBA will present the performance Pièce distinguée n°45 (2016), which brings a new facet to the ‘distinguished project’, and the film FILM NOIR (2014–17), dedicated to the extras of the great cinematographic productions.

La Ribot (Madrid, 1962) lives and works in Geneva. Deliberately radical, her artistic production configures a universe in which categories merge and labels are mixed up, in which the genre is questioned and any object, real or imagined, can be interrogated; a universe of abundance and creativity, dominated by colour and acidic humour. A pioneer of contemporary dance, the works of this dancer and choreographer have been performed on numerous stages around the world. Her creations in the field of video and the visual arts, which she has also practised, have resulted in pieces that today belong to collections such as the Centre Pompidou, Paris, and the Museo Reina Sofía, Madrid, among others. She was the recipient of the Spanish National Dance Award in 2000 and the Gold Medal for merit in the fine arts in 2015, both given by the Spanish Ministry of Culture. Not limited to any genre or artistic discipline, she is interested in all types of media, maintaining a transversal freedom of action and thought.
Read more
In collaboration with: 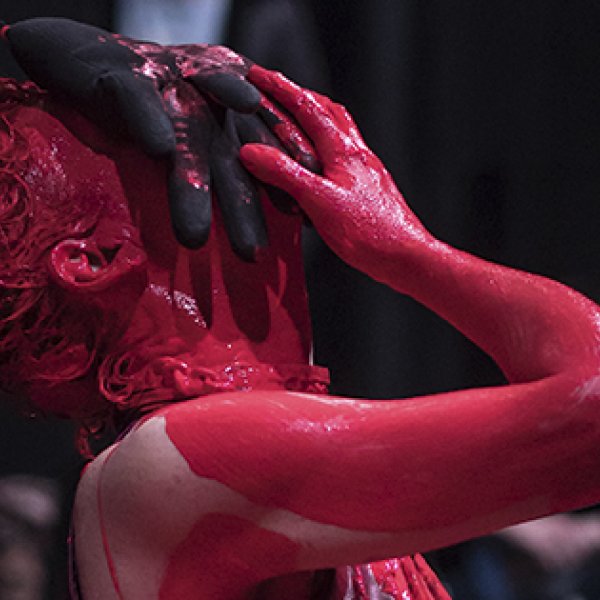 FRIDAY 26 APRIL
► 6 pm Pièce distinguée n°45 (2016). Performance
Pièce distinguée n°45 is the only Pièce distinguée that does not belong to a series/performance. On this occasion, it includes the participation of actor Juan Loriente, with whom La Ribot has collaborated since 1993. It is a unique action, like a death foretold where the act of loving, the death wish and the painterly gesture merge in a paradox that confronts contemplation and violence.
Venue: Museum Atrium
Admission: 5 €

BookingAccess by clicking on the button.

► 7.30 pm Conversation
La Ribot, Àngels Margarit, director of the Mercat de les Flors, and Pablo Martínez, MACBA’s Head of Programmes, will reflect on the relationship that the artist establishes with society, its margins and the emblematic figures that constitute her artistic practice.
Venue: Museum Atrium
Admission: Free

FROM THE 26 APRIL TO THE 6 MAY
► During Museum opening hours. Special program.
Screening of FILM NOIR (2014-2017) de La Ribot
FILM NOIR is a film work in which the camera dissects images taken from major Hollywood productions. By superposing black bands over the protagonists, the viewer's gaze is directed towards the margins, thanks to which we discover what has always been present, although invisible: the extras. Through the use of voice-over, music and editing, La Ribot develops a subjective reflection by which the extras appropriate the film.
Venue: Tower, floor 1
Admission: Free with Museum ticket 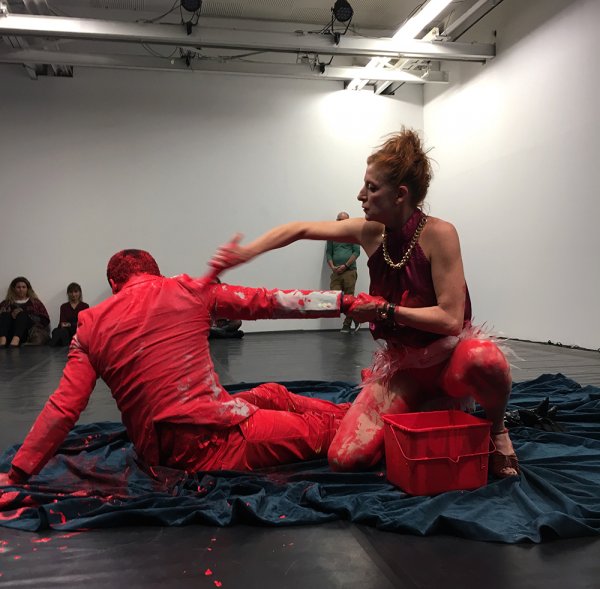