This lecture will presentWHW Akademija, an independent, interdisciplinary and tuition-free study programme for emerging artists in Zagreb, founded in 2018 by the curatorial collective What, How & for Whom/WHW, which will share its experiences related to cultural programming with the restrictions of the pandemic and the use of open-end formats in experimental education.

During the pandemic, unstable conditions have become a prevailing paradigm of the wider cultural landscape. This lecture will discuss how the processes of self-organisation, reciprocity, adaptability, collectiveness, antifragility and mutual care that WHW Akademija tries to cultivate can be relevant on a larger scale.

What, How & for Whom/WHW is a curatorial collective formed in 1999 and based in Zagreb and Berlin. Its members are Ivet Ćurlin, Ana Dević, Nataša Ilić and Sabina Sabolović, and designer and publicist Dejan Kršić. WHW organizes a range of production, exhibition and publishing projects and it has been intensively developing models based on collective way of working, creative use of public space and collaboration between partners of different backgrounds. Primarily shaped by the format of the exhibition, WHW projects are conceived as platforms for progressive modes of cultural production and reflections of social reality. What, how and for whom, the three basic questions of every economic organization, concern the planning, concept and realization of exhibitions as well as the production and distribution of artworks and the artist’s position in the labor market. These questions formed the title of WHW’s first project dedicated to the 152nd anniversary of the Communist Manifesto, in 2000 in Zagreb, and became the motto of WHW’s work and the title of the collective.

Since 2003 WHW collective has been running the program of Gallery Nova, a city-owned gallery in Zagreb. Gallery Nova program had been conceived in opposition to dominant representative understanding of culture, and streams towards opening space for public discussion on issues that are ignored, made unfashionable by their lack of glamour and non-marketability, swept under the carpet or even openly suppressed. Gallery Nova program consists of international group exhibitions and solo shows by Croatian and international artists; discursive program encompassing lectures, workshops, seminars and public discussions; as well as a series of publications, whose aim is to create the links between the art practice and wider social context.

Read more
This activity is part of Education from Below, a project with the support of Creative Europe's programme of the European Union Creative Europe. 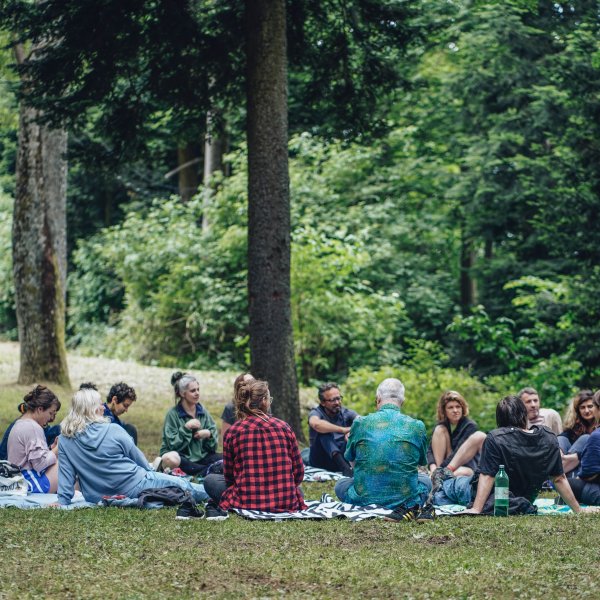 Gold does not take on any dirt. And gold, just are diamonds, is an exalted material. It possesses such a degree of abstraction that it encounters you –if you use it artistically– on an already exalted level.
James Lee Byars