This program offers an overview of the expansion of documentary practices in Europe and the United States during the crucial decade of the 1930s, with a special emphasis on the way in which the political tensions of the decade led to different approaches to the representation of the disadvantaged and the working class.

Since John Grierson, who founded the British Documentary Movement in the late 1920s, famously defined documentary as the "creative treatment of actuality", the genre has generally been considered to be historically bound up with the representation of the working class. While the British Movement condensed the public, self-conscious formulation of the genre, we shouldn't forget that it had actually been taking shape since the final decade of the 19th century. Documentary's "prehistoric" era, which spans from 1890 to 1920, is inextricably bound up with the struggles for civil rights and for the implementation and early development of the modern welfare state in the West, and with the revolutionary movements that triumphed in 1917. The production of images showing the disadvantaged classes was an ideological, symbolic and communicative tool typical of the liberal state, and has become a means for gaining social rights. As such, the ideology of social change is inherent to the documentary genre and its historical evolution. This is the main source of the debate around the ethics and politics of the genre, which talk of it as a "democratic art"..

Society's victims are the quintessential subject of the documentary genre. It could be said that the genre was historically constituted to represent these subjects, thus setting up a "tradition of the victim", to quote film historian and critic Brian Winston in relation to the Griersonian documentary. Nevertheless, we can also identify other divergent or conflicting ideas of how "the victim" was conceived by the documentary genre during the twenties and thirties. Against the liberal, paternalistic Griersonian current, there was a parallel current linked to the international worker's movement, which led to the creation of the different kinds of amateur associations that proliferated in Northern Europe and reached the United States. These Leagues worked to promote image-based culture among the working class, sought forms of emancipation through self-representation and tried to overcome the paternalistic model. Conquering the means of production meant mastering representation.

The documentaries often deal with subjects linked to the reformist policies of the Depression era and the New Deal and of the movement of workers' film and photography leagues. They describe social struggles and daily life, the effects of the economic crisis on the rural world and inflation among metropolitan industrial workers. They include recurring images of unemployed and precarious workers. The scenes of multitudes and working class characters on the streets are an attempt to shape the new emergent working class subject that is developing in two directions at once - through singularisation and de-subjectivation. One of the main problems of this period is the unresolved tension between individuality and mass movements, and the documentaries express this tension in images.

The program traces a course that begins with pioneers working in Russia. such as Dziga Vertov, Esther Shub and Alexander Dovzhenko, and America, like Robert Flaherty, and ends with the documentaries on the Depression in the US at the threshold of World War II, providing an overview of the rhetoric of the genre and its development during this period. The practices embrace multiple registers, from rudimentary information films and the use of archival materials to highly abstract, lyrical languages. While there have been many different forms of persuasion inherent to the documentary, the figure of the working class subject as victim has been central to the type of appeal to the public that the genre seeks.

Films are projected in their original version with Catalan subtitles.

Esther Shub uses a montage of archival images from 1912 to 1917 to describe the life of the family of the last Russian Tsar and expose the contradictions of pre-revolutionary society.

Vertov was hired as secretary by the Moscow Film Committee in 1918, and eventually became chief editor of Kino-Nedelia, the first Soviet journal devoted to film. He edited 43 newsreels, in collaboration with Lev Kuleshov and Edourad Tissé. In 1922, Vertov began the series of Kino-Pravda newsreels in which he filmed all kinds of public places, sometimes with a hidden camera and without asking permission. In the same year he published his Kino-Eye theory, in which he rejected all elements of conventional cinema in favour of capturing cinematic "truth" through a montage of fragments from everyday life in tiny, seemingly illogical edits that challenge the rhythms of natural vision and the structures of thought.

This session presents works by filmmakers from the British Documentary Movement, a school led by John Grierson, whose work is seen as a predecessor of Italian neorealism and English Free Cinema. Thanks to government support, the genre was able to mature and create closer ties to audiences by including interviews and dramatized re-enactments in a style that was a precursor of today's television docudramas, as Housing Problems and Night Mail show. November 19
De Brug , Joris Ivens, 1928, 11'
Philips radio, Joris Ivens, 1931, 36'
Les Maisons de la misère, Henri Storck, 1945, 33' A pioneer of documentary filmmaking, Joris Ivens (Nijmegen, 1898 – Paris, 1988) used cinema to explore subjects like Soviet socialism, the Spanish Civil War, the Indonesian struggle for independence and the Cuban and Chinese revolutions. The first film focuses on a bascule bridge in Köningshaven, Rotterdam, while Phillips Radio portrays modern production processes at radio factories in Eindhoven. The film by Henri Storck, a follower of Flaherty, who co-directed Misèrie au Borinage with Ivens, captures and condemns the existence of a belt of shanty housing in the suburbs of Brussels. November 26
Fiestas cristianas / Fiestas profanas, José Val del Omar,1934-1935 , 36'
Las Hurdes, tierra sin pan, Luis Buñuel, 1933, 27'
The Spanish Earth, Joris Ivens, 1937, 53'
This session is dedicated to Spain and presents one of Val del Omar's collaborations with the Pedagogic Missions, a Spanish educational project created in 1931 in the context of the National Pedagogic Museum and the Second Spanish Republic, and inspired by the philosophy of the Free Institution of Teaching. Val del Omar filmed over forty documentaries, most of which have been lost. Dating from the same year, Buñuel's harsh documentary looks at the backwardness of the Spanish region of Las Hurdes, based on a colossal human anthropology study by Maurice Legendre.
The Ivens film, one of the most important documentaries on the Spanish Civil War, was filmed by John Ferno and edited by Helen van Dongen, with commentary by Ernest Hemingway. Ivens strikes a balance between people's day-to-day life and their struggle to survive, and he juxtaposes their bitter struggle against fascism with the need to work in the lands in which they live. December 10
Film and Photo League. 1931-1934

The Film and Photo League explored and spread the ideas behind social and documentary photography in the United States from 1936 until it disbanded in 1951. Its roots were in the international European photography movement that emerged from the radical political scene in late twenties Germany. Its initial aim was to provide the left-wing press with images of the political demonstrations and strikes. But in 1935 the members of the Film and Photo League reorganised and turned their attention to documenting the way of life of the working class. This session includes Redes, by Paul Strand, one of the League's leading filmmakers. In a style that owes a lot to Flaherty, his film, commissioned by the Mexican government, tells the story of the uprising of a group of fisherwomen in Veracruz. December 17
The river, Pare Lorentz, 1937, 31'
The land, Robert Flaherty, 1939-1942, 51' These films are a sample of the work of filmmakers in the North American New Deal in the mid 1930s, when president Franklin D. Roosevelt launched a publicity campaign to inform citizens of the scope of the economic measures aimed at alleviating the serious economic crisis of 1929. Both The River and The Land deal with the degradation and erosion of the Mississippi river by over-cultivation of the land, and they were both commissioned by the United States Department of Agriculture. Lorentz's film ends with practical recommendations for the use of new agricultural techniques for farmers, while the Department rejected Flaherty's film, which was only screened at the MoMa. Program subject to last-minute changes
MACBA Public Programs
Tel. (+34) 93 412 14 13
programespublics [at] macba [dot] cat 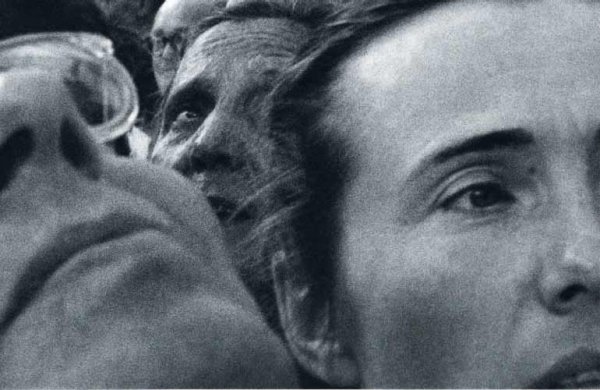