In 1980, the Italian critic and curator Lea Vergine organised the exhibition L'altra metà dell'avanguardia 1910–1940, which included for the first time, along with the work of around one hundred women, watercolours from the 1930s by the Turin artist Carol Rama, which had been censored in 1945. Decried as pornographic, fetishist and grotesque, Rama’s work had remained hidden for decades. Although the criterion of the selection was that of ‘women artists’, Vergine herself alluded to the complexity of the assembled works. As she noted: ‘Many of the artists were Jewish, others homosexual, while others were not strangers to madness [...] regarded as transvestites, deformed or deviant.’ The result is a cartography of dissident practices that goes beyond the masculine-feminine opposition and that, following Michel Foucault, could be called somato-political: ethnic, racial, sexual, bodily and cognitive differences that challenge the normative gaze and stability of the modern subject.

On the occasion of the exhibition of The Passion According to Carol Rama, five contemporary critics have been invited to interrogate the dominant narratives of the history of twentieth century art and its exclusion of somato-political minorities. What happens to the hegemonic narratives of the history of art if we confront them with their other subalterns? What are the relations between the languages of art and other exclusionary political and sexual discourses? Here other narratives are proposed – other stories capable of generating new forms of public visibility. 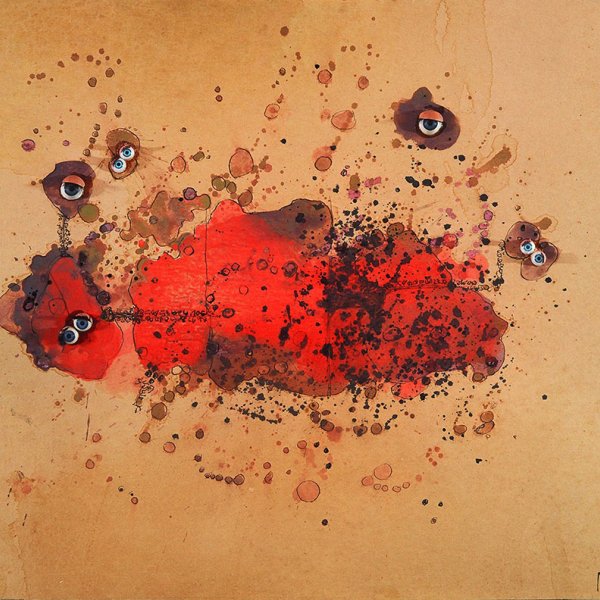 The Other Side of the Avant-garde: Somato-political Dissidence and Aesthetics in the Art of the Twentieth Century
Share

FRIDAY 12 DECEMBER, FROM 5 TO 9 pm; SATURDAY 13 DECEMBER, FROM 5 TO 7 pm
Venue: Meier Auditorium
Fee: 10 euros. Booking required. Limited places
In French (on Friday) and in English (on Saturday)with simultaneous translation. All sessions can be followed via streaming. Punctuality is advised

FRIDAY 12 DECEMBER
5 pm Beatriz Preciado: The Carol Rama Paradigm. A Story for Ghosts
Taking Carol Rama’s process of exclusion-discovery-invisibility in relation to the dominant historiography of twentieth century art, we ask whether notions of ‘the woman artist’, ‘outsider art’ and ‘the art of the insane’ are still relevant as epistemic tools for writing history. Also, whether biographical, psychoanalytic and identity readings are used to visualise artists and their work or to eclipse them. Rather than providing a footnote in a genealogy of canonical artists, our encounter with Carol Rama forces us to break the hegemonic narrative and rethink the writing of history from other critical parameters.

6.15 pm Patricia Falguières: Interior Women. Another Story of the White Cube, Italy, 1945
In post-war Italy, the museum became a place of experimentation for a generation of women emerging from the resistance to fascism. An unprecedented exhibiting practice proposed a unique way of accessing the White Cube. And it discovered its own theory: the museum thought of as ‘an interior’.

7.45 pm Elisabeth Lebovici: The MACBA’s Hot Mamas
Since Carol Duncan’s famous article (‘The MoMA’s Hot Mamas’, Art Journal, Vol 48, n°2, summer 1989), the canonical narrative of the modern art museum as social environment has been deflated by almost three decades of feminist, gay, lesbian, queer, postcolonial, postmodern... discourses. With The MACBA’s Hot Mamas, I wish to look at our current fascination for the archives, documents, memories and texts that ground a feminist and/or lesbian ‘dissident commune’, working as model, not only for art production, but for a potential art-historical narrative; relying on communities and collaborations rather than individuals, horizontality rather than verticality. I wish to work on the ‘photogeny’, that is, the seduction of this potential narrative.

SATURDAY 13 DECEMBER
5 pm Julia Bryan-Wilson: Wrong-Bodiedness: Dis/Ability and Contemporary Dance
This talk explores several recent practices of performance and dance that utilise non-normative bodies, raising questions about the construction and deployment of ‘wrong-bodiedness’. What can dance in particular offer in terms of rethinking the choreography of ability and disability? How might bodies moving together in space bring forth new models of spectacularisation, expertise, even grace?

6 pm Jack Halberstam: On Being Late: Notes on Auto-Destructive Art and the End of the Human
This talk will explore at least three variations on Auto-Destructive art from the 1960s to the present. Gustav Metzger’s work has been profoundly influenced by his childhood experience as a refugee from Nazi Germany. Metzger’s artistic method involves engaging, mining and conjuring the void at the centre of human existence and using it to counteract the forces of fascism, capitalism and global warming. Metzger’s philosophy of auto-destruction produces gestures that are at once punk (Pete Townshend’s famous guitar-smashing performances are attributed to his connection with Metzger), queer (the obliteration of the grandiosity of the human has been the goal of at least one strand of queer theory) and anti-fascist – he refuses the model of the genius artist and instead makes the case for the artist as a guide to the unmaking of the human. We can find echoes of this project in avant-garde art performances such as Yoko Ono’s Cut Piece, Marina Abramovich’s Rhythm 0 and in the conjuring of risk and vulnerability and within the works of the Viennese Actionism group from the 1960s, especially the work of Gunter Brus, who used piss and shit in his self-abusing performances to make a statement about post-war Austrian fascism. This talk will conclude with a consideration of the auto-destructive impulse in queer art from Heather Cassils to Julie Tolentino.

7 pmAsk The Curators
Visit to the exhibition The Passion According to Carol Rama and discussion with the curators Teresa Grandas and Beatriz Preciado. Within the Experience MACBA programme and marking the close of the seminar.

PARTICIPANTS
Beatriz Preciado is a philosopher and queer activist. Masters in Contemporary Philosophy and Gender Theory from the New School for Social Research in New York and Doctor of Philosophy and Theory of Architecture from Princeton University, Preciado is an international reference for gender studies, body politics and sexuality. Author of Testo Junkie (Feminist press/University of New York, 2013) and Pornotopia (Zone Books/MIT Press, 2014) among other books, together with numerous articles in magazines such as Multitudes, Artecontexto, Parallax and Log. Has collaborated on curatorial projects with Annie Sprinkle, Beth Stephens, Mark Tompkins, Oreet Ashery, Ron Athey and Shu Lea Cheang. Preciado is currently director of the La Nit programme as well as the Independent Studies Programme (PEI) at MACBA, and has co-curated, together with Teresa Grandas, The Passion According to Carol Rama.

Julia Bryan-Wilson is Associate Professor of Modern and Contemporary Art at the University of California, Berkeley. She is the author of Art Workers: Radical Practice in the Vietnam War Era (UC Press, 2009), and editor of October Files: Robert Morris (MIT Press, 2013). A widely published scholar and critic dealing with feminist and queer theories, her writings have appeared in venues such as Artforum, Art Bulletin, and October. She won the 2013 Art Journal Award, and in 2014 was the Terra Foundation Visiting Scholar in American Art at the Courtauld Institute of Art.

Patricia Falguières lectures on social sciences at the École des hautes études in Paris. She has published numerous essays, among them Les Chambres de merveilles (Bayard, 2002), Le manierisme. Une avant-garde au XVIe siècle (Gallimard, 2004) and the French edition of Julius von Schlosser’s classic Les cabinets d'art et de merveilles of tardive renaissance (Macula, 2012). Currently researching techné in the Renaissance, the position of artistic practices in the Aristotelian order of knowledge, and architectural ornament. Falguières is the author of numerous articles on contemporary art, the relationship between art and the theatre of the twentieth century, and the French critical edition of Brian O'Doherty’s classic Inside the White Cube. Together with Elisabeth Lebovici, Hans-Ulrich Obrist and Natasa Petresin-Bachelez, Falguières is the director of the following seminars at EHESS: ‘Something you should know: Artistes et producteurs aujourd'hui’ and ‘Arts industriels’. Since 2012, she has chaired the Centre National des Arts Plastiques.

Jack Halberstam is Professor of American Studies and Ethnicity, Gender Studies and Comparative Literature at the University of Southern California. Halberstam is the author of five books including: Gothic Horror and the Technology of Monsters (Duke UP, 1995), Female Masculinity (Duke UP, 1998), In A Queer Time and Place (NYU Press, 2005), The Queer Art of Failure (Duke UP, 2011) and Gaga Feminism: Sex, Gender, and the End of Normal (Beacon Press, 2012) and has written articles that have appeared in numerous journals, magazines and collections. Halberstam has co-edited a number of anthologies including Posthuman Bodies with Ira Livingston (Indiana University Press, 1995) and a special issue of Social Text with José Muñoz and David Eng titled ‘What’s Queer About Queer Studies Now?’ He is a popular speaker and gives lectures around the country and internationally every year. Lecture topics include: queer failure, sex and the media, subcultures, visual culture, gender variance, popular film, animation. Halberstam is currently working on several projects including a book titled THE WILD on queer anarchy, performance and protest culture, the visual representation of anarchy and the intersections between animality, the human and the environment.

Elisabeth Lebovici is an art historian and critic living in Paris. She worked as a culture editor for the newspaper Libération from 1991 to 2006 and is now a freelance writer with a blog: http://le-beau-vice.blogspot.com.es/. Lebovici was the editor of L’Intime (Paris, ensb-a, 1998) and co-wrote, with Catherine Gonnard, Femmes/artistes, Artistes/femmes, Paris de 1880 à nos jours (Paris, Hazan, 2007). She is currently working on a book project, Ce que le SIDA m’a fait, and a film, Entre femmes seules, about lesbian agency in French television (1950’s–1970). Since 2006, with Patricia Falguières and Natasa Petresin-Bachelez, she has organised the weekly seminar ‘Something you should know: Artistes et producteurs aujourd’hui’ at EHESS, Paris. Lebovski is part of the ongoing project, Travelling Féministe, around the audiovisual archives of the Centre audiovisuel Simone de Beauvoir. 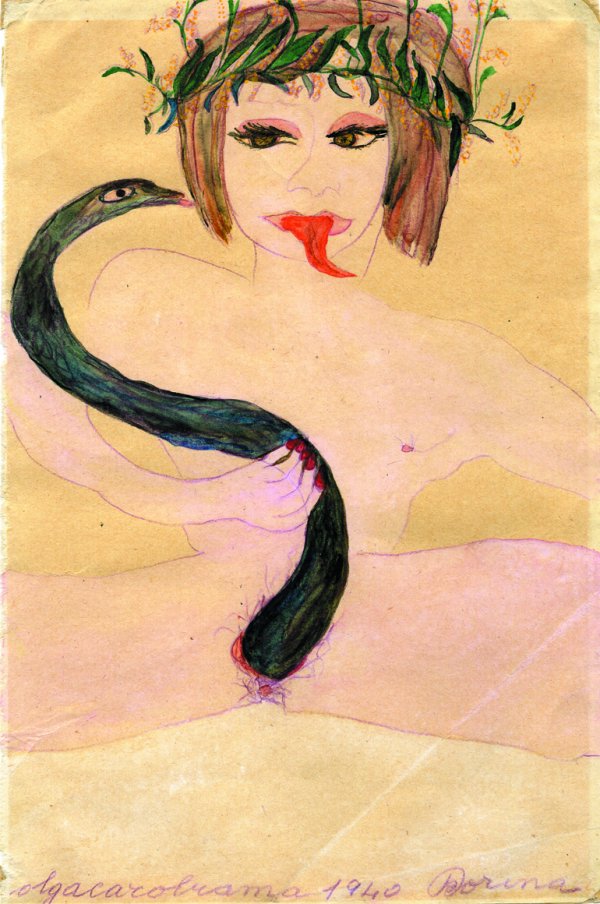 The Passion According to Carol Rama 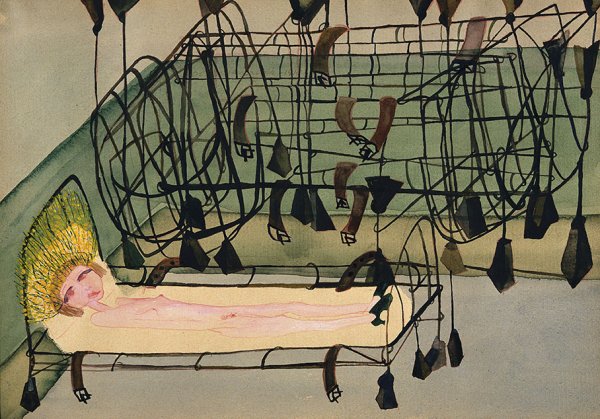 Ask the Curators. The Passion According to Carol Rama Experience MACBA
Others

On Being Late: Notes on Auto-Destructive Art and the End of the Human
Wrong-Bodiedness: Dis/Ability and Contemporary Dance
Final discussion "The other side of the avant-garde: somato-political dissidence and aesthetics in the art of the twentieth century" 1st session
The MACBA’s Hot Mamas
Interior Women. Another Story of the White Cube, Italy, 1945
The Carol Rama Paradigm. A Story for Ghosts