Photography is a product of the industrial era and is emblematic of modern visual culture. According to modernity, photography and vision are synonymous. Thanks to its explosion onto the printed page and its democratization, both of which were initiated at the turn of the 20th century, photography is the visual means of representing and communicating par excellence. Photography is also an historically ambiguous medium that exists between art and scientific instrumentality and, in that way, its role as historical documentation is one of the fundamental concepts within artistic and scientific culture, as well as that of public life in the 20th century. To Modern Art, photography is a means of describing things precisely as well as experimenting with the limits of visual perception. To the Social Sciences, photography is a testament and a document for research and discursive work. To mass media, photography allows it to provoke sensations which produce opinions and debate.

At this crossroads of Art, Social Sciences, Mass Media and Pop Culture, all of which are manifested in the printed page, photography plays an important role in the 20th century as the means of maximum penetration and permeability and, because of that, has had the greatest impact on perception and public opinion. In this way, we can say that it is through photography that reality is constructed, which makes it much more than a representation. The 20th century sees the world through photographs and thanks to them. Photography is not so much a register of what is, but a true mechanism for the construction of perceptive forms and a visual instrument. The city is the stage of modern vision, which is photographic.

This seminar is conceived as a space for reflection and debate on the photographic representation of historical processes of city transformation.

This seminar is a part of the open PEI program

6 pm
Photography of the Social Forms
Presented by Blake Stimson

8 pm
The City in Modern Photography

Ian Jeffrey is an Art Historian and Photographer.

Maren Stange is a professor in the Humanities and Social Sciences Department at New York's Cooper Union.

Blake Stimson is an Adjunct Professor of Art History at the University of California at Davis. 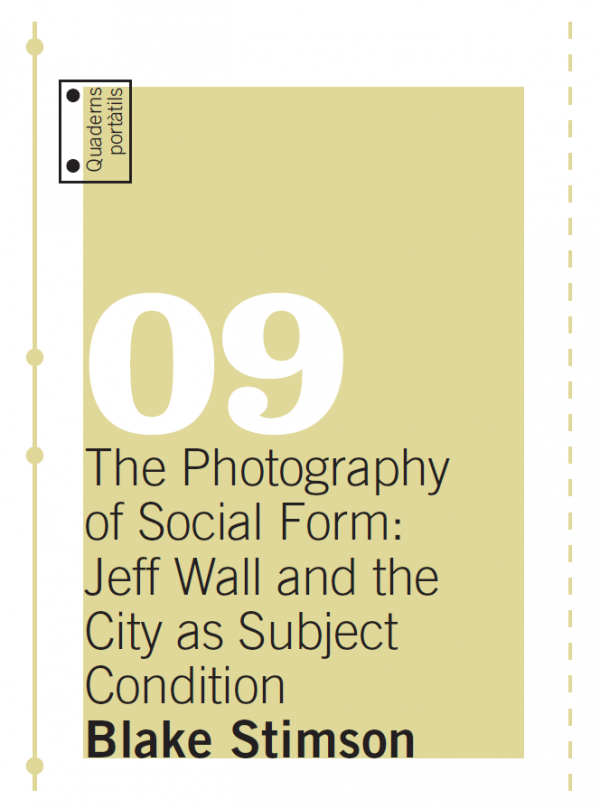 Quaderns portàtils
The Photography of Social Form: Jeff Wall and the City as Subject Condition
Blake Stimson
I don’t think about art when I’m working. I try to think about life
Jean-Michel Basquiat