This course, organised in connection with the exhibition The Anarchy of Silence. John Cage and Experimental Art, which will open at the MACBA in Autumn 2009, will trace a course through the career of John Cage: from his early works in the thirties, in which he expanded the parameters of percussion music using unconventional instruments, to his famous conception of silence and his innovative multimedia collaborations in the eighties. It will also analyse the influence of Cage on his contemporaries and on later artists, as well as his collaborations with Robert Rauschenberg and Merce Cunningham, among others.

So that I won't be deaf and blind to the world around me.

John Cage (1912-1992), singular artist – painter, musician, thinker, musicologist and inventor – showed that it was possible to venture into the woods of music, that the transformation of thought can be one of the aims of art and that there is a continuity between life and art. He did this by ridding his baggage of preconceived ideas, of the burden of memory and the ballast of over-automated emotions, until he became a bird. Thus transformed, John Cage invites us to leave the cage, any cage, so that we won't be deaf and blind to the world around us.

First, we have to leave the cage formed by a musical framework that turns sound into notes and harmony into a wall. Cage suggests a different definition of what we consider to be "musical", and draws endless imaginary landscapes for music. Percussion instruments and his prepared piano will visit these landscapes, and all noises and silence will also land there. Through silence, Cage continues along this completely new path, moving through the nothing-in-between, chance and the indeterminate, with echoes of Zen Buddhism.

Almost without noticing, in this flowing over nothingness in which all limits have been challenged, the bird has left the second cage: that which makes a distinction between life and art. Outside he breathes in continuity like in a happening, like his "musicircus" in which simultaneity – like life itself – comes into play.

Once the boundaries between art and life have disappeared, this same gesture has to be reflected in the expression of thought, in writing itself. To do this, the artist turns to diverse typographies as in "Silence", creates his "mesostics" and produces the break between signifier and signified ("Empty Words"). After this journey, which has pulverised what was known as "art", it is time to leave the final cage, made up of value judgements, and dare to think differently about the social action of art and the connections between art and politics.

«I am for the birds, not the cages that people put them in.» John Cage 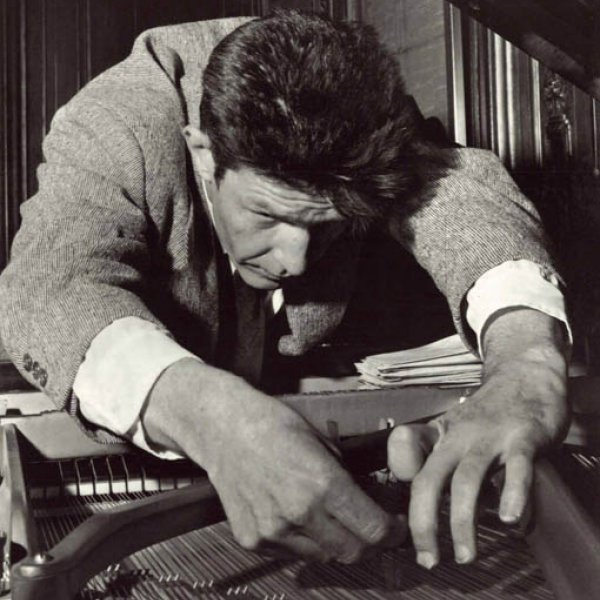 Monday April 20, 7pm.
First session
Imaginary landscapes for music
This session is presented as a general introduction to John Cage and the way in which he begins demolishing the musical edifice right from his early works. From this perspective, we will look at his works for percussion, his use of new technologies, his idea of duration and the invention of the "water gong" and prepared piano.

Tuesday April 21, 7pm.
Session two
A tour through the nothing-in-between
The tour through the nothing-in-between will start with Cage's experiences in the anechoic chamber and his claim that silence does not exist. From here, and looking at his references to Zen Buddhism and the use of the I Ching, we will go into the role of chance and indetermination in musical composition.

Monday April 27, 7pm.
Session three
In the continuity of the arts / In the continuity of life
This session will be split in two parts: the first will look at the way in which John Cage conceives his work as a painter and his collaborations with other artists like Merce Cunningham, the New York School and James Joyce. The second part will focus on the creation of the happenings and "musicircus" as expressions of the continuity between art and life.

Tuesday April 28, 7pm.
Session four
Oblique listening. Starting from the assertion that art is self-alteration, this final session will go on to present the Cagean idea of a kind of off-centre perception that necessarily excludes value judgements, and that looks at art in terms of its social function. This opens a dialogue between art and technology that leads to techno-anarchy.

Reference texts: Diary: How to Improve the World
(You Will Only Make Matters Worse) Continued 1973-1982
DVD: One 11 and 103 by John Cage and Henning
Lohner (2006, fragment)
Connections: Buckminster Fuller; Norman O. Brown; Marshall McLuhan

Carmen Pardo is a Doctor in Philosophy from the University of Barcelona and a researcher at the Paris Ircam-CNRS unit (1996-1998). An editor and translator of John Cage, she has published "Escritos al oído" (1999) and is the author of "La escucha oblicua: una invitación a John Cage" (2001); "Robert Wilson" (in collaboration with Miguel Morey, 2003) and "Las TIC: una reflexión filosófica" (2009). Her work as musicologist and organiser has led her to coordinate international congresses such as Music, arts and technologies: Towards a critical approach Barcelona/Montpellier, 200); the art media stage production Bosque Sonoro: Homenaje a John Cage (Barcelona, 2003); a Ciclo John Cage program and another on Esto llamado... minimalismo musical... y otros (Músicadhoy/La Casa Encendida, Madrid, 2006 and 2008) and Night of Electroacoustic Music (Ars Musica, Brussels, in collaboration with Orquestra del Caos, 2008).