Invisible miracles was inspired by the films of Panleve. So in a very general way the workshop will be part a preparation for the performance which will alternate between solo and group. Basically I will develop a solo and in the workshop develop some group actions to insert. The workshop will each participant in developing an image using props and/or objects, and movement, while considering the materials of live performance, space and time. I will speak about my own structures based on poetic structure and film in the constructing of an image in time and space thinking of frame or no frame. Some may work with video to record, some not, depending.

Simultaneously we will, in a very simple way, consider sound in relation to image. As I did in the past, I want to work with everyday instruments and noisemakers improvising sound to be used during my performance so that I would say most would take part in this 'orchestra.' In my performance Jason, the pianist, and I worked together in a duet me with toys, kitchen utensils, bells, and rattles he on piano. I want to continue this exploration of live sound.

Drawing will play an important rol in my performance and can also function as an activity in the workshop. So we can begin in several ways and ask the participants to each bring a very short poem, some sound objects and with this develop an image or I would ask you or Jorge to help choose some poems to analyze for structure and relation and treatment of content. Also I will choose a few films to look at not in their entirety but fragments to look at scenes and how they are constructed. Some films have almost complete scenes for instance Fellini s Nights of Cabiria is a series of episodes interesting in themselves.

The workshop will be in English. 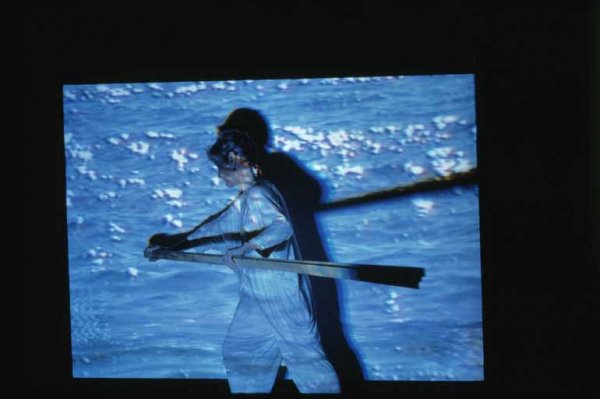