Course in art and contemporary culture

Though the history of art has been largely built on an analysis of individual works, another way of writing that history could involve an analysis of exhibitions. Discourse on contemporary art is mainly furthered through exhibitions, which operate not only as spaces of presentation and display, but also as instruments, means to formulate ideas about artistic production and to transform its reception. The exhibition makes it possible for works to establish relationships not only with the viewer, but also with other works and other notions of what art is or might be. The exhibition is neither pure discourse nor mere context; it is perception and knowledge in action. The exhibition is a perceptive device in and of itself, a machine for seeing and an act of learning.

From this perspective, it is possible and necessary to reread the history of contemporary art on the basis of its devices for presentation; the MACBA joins in recent attempts to consolidate an understanding of the exhibition as a cultural object and to trace its genealogy – an undertaking that involves the history of art and art criticism, as well as architecture (exhibitions are, after all, public spaces), the psychology of perception and, of course, the voices of curators and artists.

The course offers an overview of some of the most emblematic exhibitions of the second half of the twentieth century, from the triumph of Pop art to the emergence of Conceptual art. This overview is conceptually organised by the artists and curators who conceived those exhibitions or, when that is not possible, by the critics who have analysed them. The close study of these exhibition models demonstrates that the ideology of the white cube – a supposedly neutral exhibition space, the seat of pure visuality as theorised by Brian O'Doherty – is largely an incomplete project, and that the history of paradigms for the exhibition of modern art could also be seen as the history of the transgression of the white cube.

James Lingwood
Since 1991, James Lingwood has been co-director of Artangel (London) with Michael Morris, and Artangel Media, set up in 2000. He is on the advisory boards for the Museu Serralves in Porto, Atelier Calder and Capc in Bordeaux.

Brian O'Doherty
A conceptual artist (under the alias Patrick Ireland), Brian O'Doherty is the author of the influential book Inside the White Cube: Ideologies of the Gallery Space (Berkeley, University of California Press, 2000), a compilation of his 1970s texts that established the expression "white cube" in reference to the ideology of the museum space. 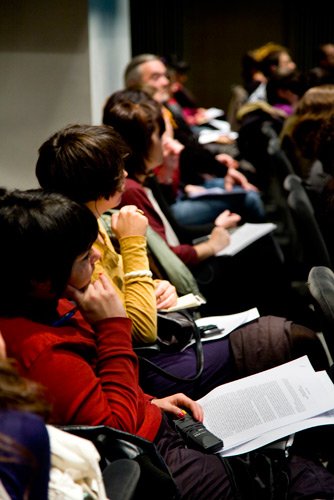 The History of Exhibitions: Beyond the Ideology of the White Cube (part two)
Courses and seminars